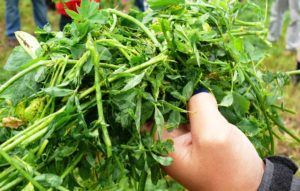 Wet, rainy weather has continued since June 6th in most parts of the province, making haying a challenge. Considerable amounts of quality haylage and baleage have been made before the rains and in between showers. However, to date only small amounts of quality dry hay have been made. Yields reported have been quite variable, with some very disappointing. Recent rainfall events are improving new seedings and 2nd cut regrowth, and will increase yields of the remaining first-cut, but at the expense of much more advanced maturity with reduced nutrient quality. Operating harvest equipment on soft, wet soils before they are firm enough can result in permanent wheel traffic damage to alfalfa crowns that impact the life of the stand.

There are many poor looking newly established forage stands. Although they were seeded early this spring into good soil conditions, extended dry weather without rain delayed the germination. Delayed germination has the same effect as delayed seeding by allowing weeds to establish. Forage germination and emergence was very uneven, particularly where the seedbed was not firmed with adequate packing and proper seed placement. Where a companion crop was seeded, such as oats or oat-pea mixtures, significant competition for moisture during that early dry period with the new forage seedlings could negatively affect establishment. Recent heavy rains have flooded and ponded in some of the new stands, and there will be increased risk of aphanomyces and other fungal seedling diseases.

2,4-DB sprayed in May and early June during the hot, dry weather suppressed some alfalfa seedling growth, with some symptoms of injury. The risk of injury to alfalfa seedlings is greatly increased when 2,4-DB application is made outside of the 1 to 4 trifoliate stage window. Many new alfalfa seedings have very uneven emergence, which in addition to rain delays, have made it challenging now to stage 2,4D-B applications at the desired 1 to 4 trifoliate stage. (Successful Forage Establishment https://fieldcropnews.com/?p=9535 )

With “catchy” haying weather, commercial propionate hay preservatives can be used to inhibit mould growth and heating while bales “sweat” and cure over time as moisture dissipates from the bales in storage. It is important that the hay storages have adequate ventilation to enable the extra moisture to dissipate from bales. Tightly stacking bales should be avoided. The use of pallets prevents spoilage of the bottom row of bales and allows air to circulate. Don’t store preservative treated and untreated dry hay in direct contact with each other as the moisture will migrate to the dry hay. (Preventing Mouldy Hay Using Propionate Preservatives https://fieldcropnews.com/?p=3655 )

Be sure to monitor hay storages for heating, particularly hay that is baled at too high a moisture. Heating and additional moisture results from the respiration and rapid growth of mould and bacteria. If the moisture and heat cannot dissipate, high temperatures and more moisture keep building. Even low amounts of heating can result in dusty hay with reduced feed quality and palatability. If severe, heating can result in a barn fire. The critical time for spontaneous combustion is usually 2 to 3 weeks after the hay is stored. If you detect a slight caramel odour or a distinct musty smell, chances are you have a problem. Probe-type hand-held electronic moisture testers are a useful tool to monitor hay heating. However, the moisture readings can be subject to variability and error, and testers should be calibrated to forage species, bale type, acid use and bale density. The thermometer feature of these probes can be very useful in monitoring new hay. Hay bale temperature 2 – 3 days after baling will often be 10°F (5°C) above what the ambient temperature was at the time of baling. Temperatures above 120ºF (50°C) indicate that there is some microbial activity that may be a problem. Refer to“Silo and Hay Mow Fires http://bit.ly/omafforage1 )

This will be my last post on FieldCropNews.com. After 36 years, I am retiring from OMAFRA to a forage industry position in the private sector. June 30th will be my last day with OMAFRA. It has been a great run!