Synopsis: Weed control options for all crops were a main topic of discussion. Dry weather and/or busy planting schedule have resulted in weedy fields looking for post emerge options. Re-planting and field assessments resulting from May 23/24 frost damage was also discussed. Much needed rain was welcomed over the whole area during the last week of May. Crop emergence is an issue where planting depth was not into moisture or where soil moisture was limited on eroded knolls or in heavy clay soils.
Corn/Soybeans/Weather:
• Late May frost combined with dry conditions caused a lot of damage to early May planted corn and soybeans, especially on the sandy soils where frost penetrated deeper into the soil. Parts of the field near field edges/grass strips showed more damage than other parts of fields. -5oC was measured at plant level in many locations near Tillsonburg. Emerged soybeans in no-till or high residue fields where hit hardest. Much of the soybean damage was evident within hours and replanting has been mostly completed. 90,000 ppa is final relatively uniform final stand appears to be the cut-off for soy replant decisions. Corn replanting decisions are taking longer, since corn that appeared to have survived the frost is struggling with lack of plant vigour. 20,000 final plant stand is the cut-off for most replant decisions. Some fields are being totally replanted followed with “Assure” before replant emergence, while other fields are being “topped up” in the patches that were most affected.
• Soybeans planted into corn stalks is showing some inconsistent emergence. Where corn stalks were Turbo tilled 1x or 2x for consistent planting, the soil dried out and planting at 2 ½ inch depth was still into dry soils. Where soys were planted same direction as corn stalks (no-till) there are rows with beans waiting for moisture in dry soils. Planting no-till beans on an angle to corn stalks seems to be the best solution.
• John Hussack commented that some corn on the heavy clay soils in Haldimand were planted into moisture, but “leafed out” underground, a ½ inch from where seed was placed. 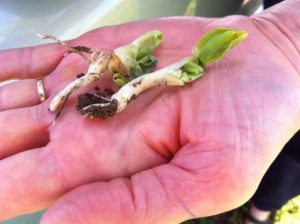 Compacted soils and planting too deep were both ruled out as a cause. No one present had ever seen this before and the only explanation John could think of was that the seedling had enough moisture to germinate but not enough to emerge. End result was reduced plant stand, but not enough to replant.

• Ginseng, was hit hard by frost. New seedlings have 10 to 20% loss. Zero seed production is predicted. Older stands (3rd/4th year) were hit hard, but the remaining season will dictate harvest. It is expected that more 3rd year stands will be harvested this fall due to disease pressure. Where cloth blankets covered the crop, damage depended somewhat on timing of cloth placement . Best protection came from blankets laid down during the warm part of the day. Blankets left on the crop between the two frost dates (May 13/May 23) are being closely monitored for increased disease pressure from warm and humid conditions between the two frosts.
• Rye crops at heading stage were impacted by frost. Dry soil conditions and high residue resulted in some patches of rye actually killed by frost and some heads sheading black pollen.
Forages:
Forage harvest is underway. Shorter than normal stands have reduced yields but good quality. Some fields, especially those with more grasses showed some moisture stress and a few fields had patches where grasses had died.
Wheat:
• Earliest wheat is at “day 0” for fusarium fungicide application window. T3 fungicide application is beginning, and will continue into the weekend.
• Staging fields will be difficult for many fields, but application when there is maximum main head emergence is the best strategy.
• Some growers with poor wheat (<50 bu/ac)are questioning applying fungicide as an a means of minimizing the economic loss of a poor crop being kept mainly for straw value. Risk of fusarium increases with thick stand, moisture/humidity, cool nights (<12oC) where plant canopy doesn’t dry as quickly. T3 application for fusarium control is the most important. Fungicide also helps prevent other issues such as rust and can maintain straw quality. Reduced rate of fungicide will also give reduced control. Full rate fungicide in a heavy fusarium pressure year will give 60-70% control – especially with secondary infection.
• Fungicide application to corn or soybeans – soybean fields in Norfolk had much higher levels of white mold last year – Fields with beans on beans will be at a higher risk depending upon weather conditions. 2014 studies compared untreated plots with Acapela fungicide for white mould timing at first flower (R1) with a 2nd application at full flower (R2) ~10 days later or Priaxor fungicide at full flower followed with Acapela at (R4) . The two modes of action gave the best results. Once white mold is present, fungicide will no longer help. The white mould best prevention is a good rotation and no-till.
Weed Control
• Stress about getting crops planted in a timely window without herbicide applications or activation of pre-emerge herbicides has resulted in many weed escapes. Action needs to occur quickly for some fields as the windows are closing in fast on early May planted corn. Replanted corn/soybeans give a few different options. Destra is one new herbicide on the market where window is closing quickly as corn passes 6-leaf stage.
• New herbicides on the market: New chemicals underlines the need for industry personnel to know the active ingredients for all products
o Destra = Ultim + Callista (for corn 2-6 leaf stage)
o EnGarde = Elim + Callista (for corn up to 2 leaf stage)
o Canopy Pro = TriCor (metribuzin) + Classic (fleabane control for pre-emerge beans) 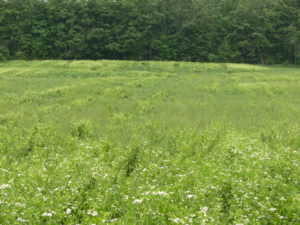 • Fleabane control – was the face-time with residual herbicides enough given the limited moisture for activation? Time will tell.
• Fleabane in forage fields and in wheat with red clover under-seeded for seed – difficult or impossible to control in forage fields especially those cut for beef hay when fleabane has gone to seed.