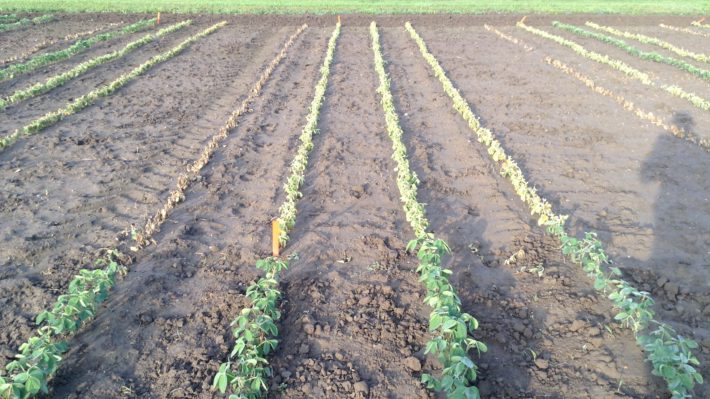 Below are 10 herbicide injury scenarios applied to 4 different soybean varieties, specifically, Liberty Link (glufosinate tolerant), Enlist (glufosinate, glyphosate and 2,4-D tolerant), Xtend (glyphosate and dicamba tolerant) and Roundup Ready (glyphosate tolerant). Since it is possible that both Enlist and Xtend varieties may be available for the 2016 growing season, one of the main objectives of the stop was to see what herbicides each variety is sensitive to.

Scenario # 1: A tank mix of glyphosate and clopyralid (Lontrel 360 at 330 mL/ac) was applied to emerged soybeans and the photo below shows that all four varieties are sensitive to Lontrel at 7 days after application. You will note that the Liberty Link variety is showing much different symptoms then the other 3, since it is also not tolerant to glyphosate. Lontrel 360 is from the carboxylic acid family within the synthetic auxin herbicide group (known as “group 4”). Since this group affects normal cell division, you will often see stems that twist or bend over. So if you want to kill any type of soybean, then Lontrel 360 is a very effective herbicide at doing so. 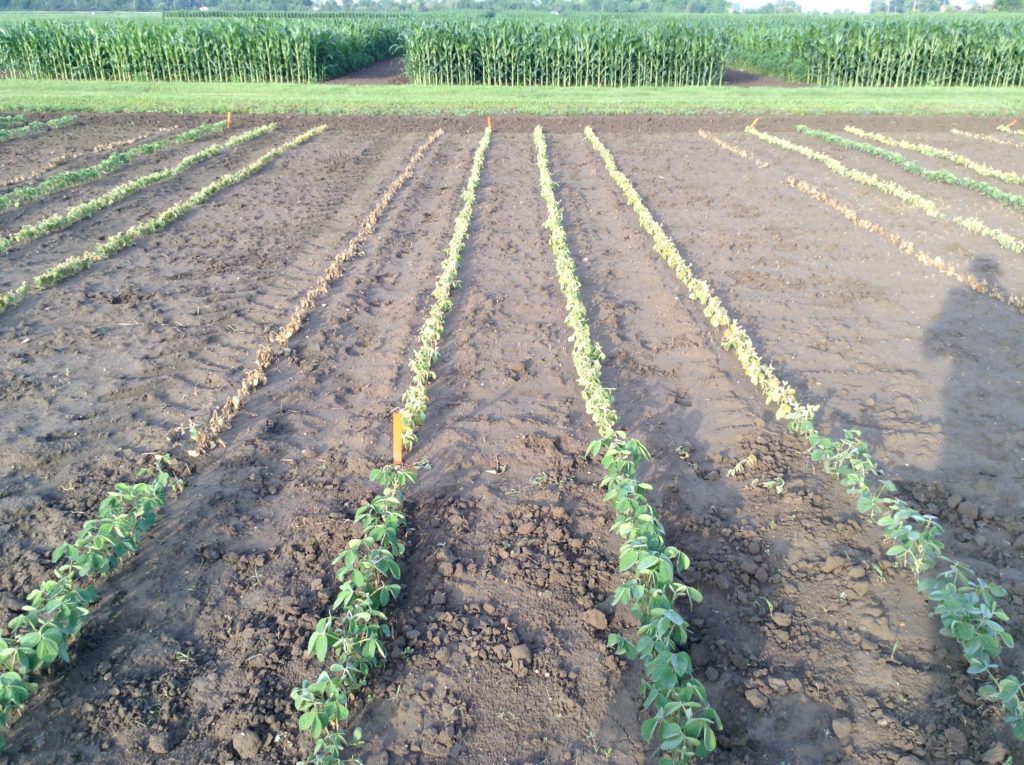 Soybean Varieties from left to right: Liberty Link, Enlist, Xtend and Roundup Ready as affected by an application of glyphosate + Lontrel 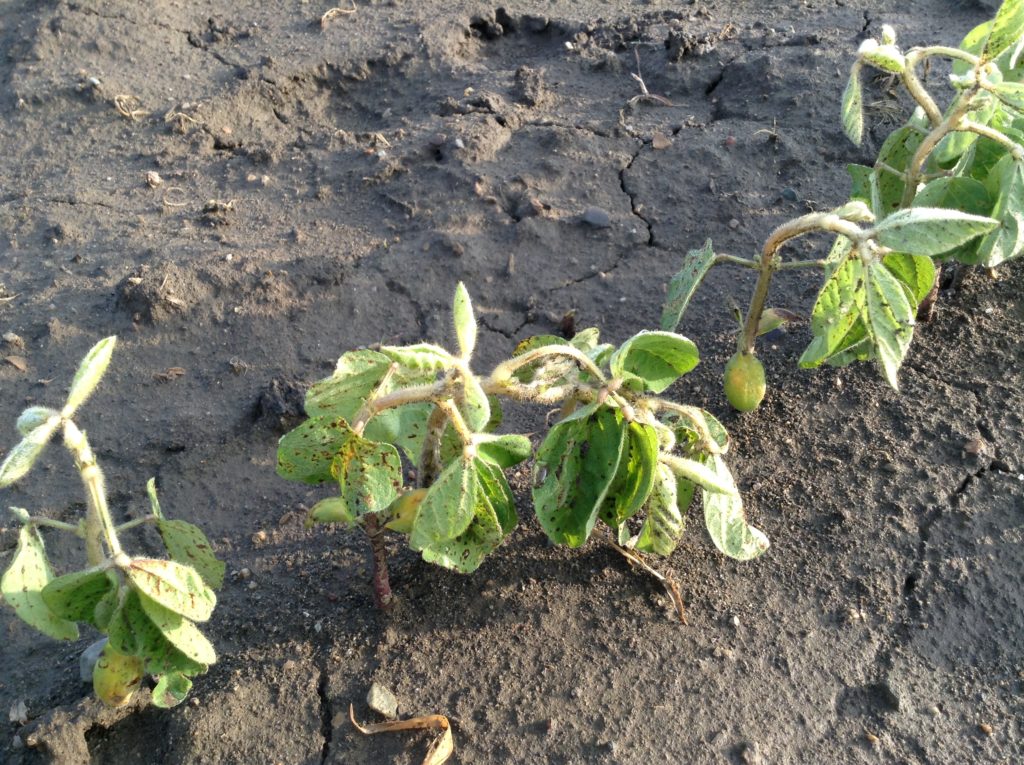 Scenario # 2: Since the Xtend herbicide tolerant system is tolerant to dicamba (i.e. Banvel II, Xtendimax) we wondered whether it would also be tolerant to Distinct (which contains dicamba and diflufenzopyr). The short answer: It is not. The diflufenzopyr component of Distinct inhibits the transport of auxin causing it to build up in the meristem. Although the Xtend variety appears to tolerate Distinct better than the other varieties (it stays green, the others don’t) there is enough stunting of plant internodes and distortion of the growing point that the soybean plant, if it does survive, will produce significantly less seed (if any at all). 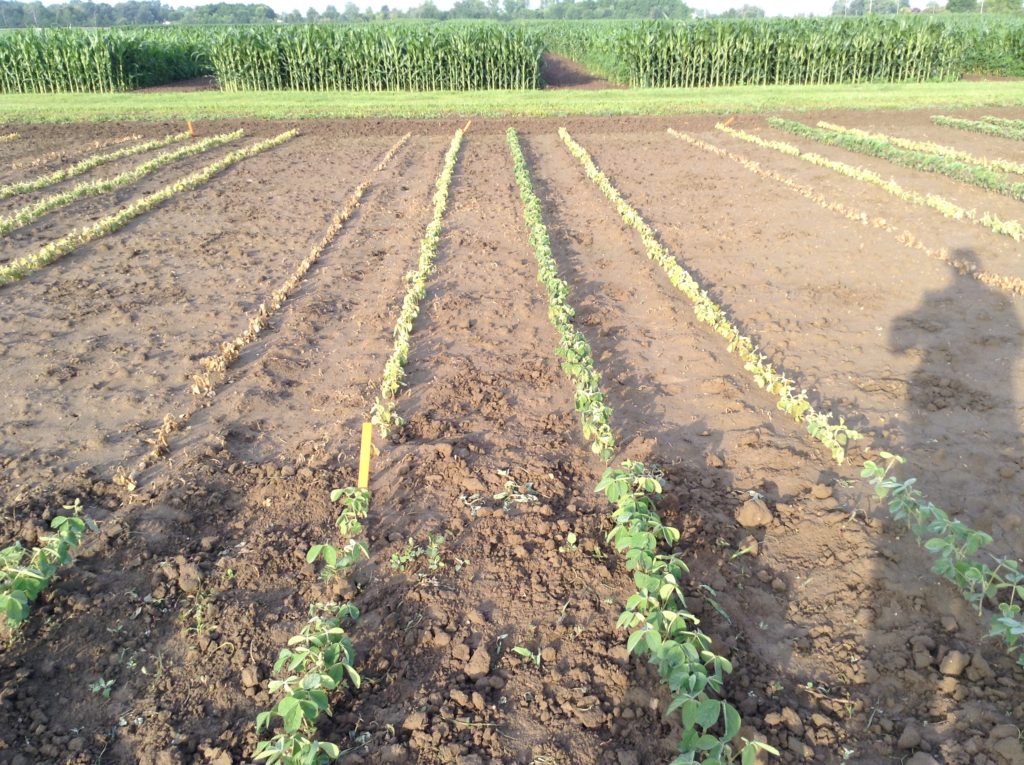 From left to right: Liberty Link, Enlist, Xtend and Roundup Ready 7 days after an application of glyphosate + Distinct 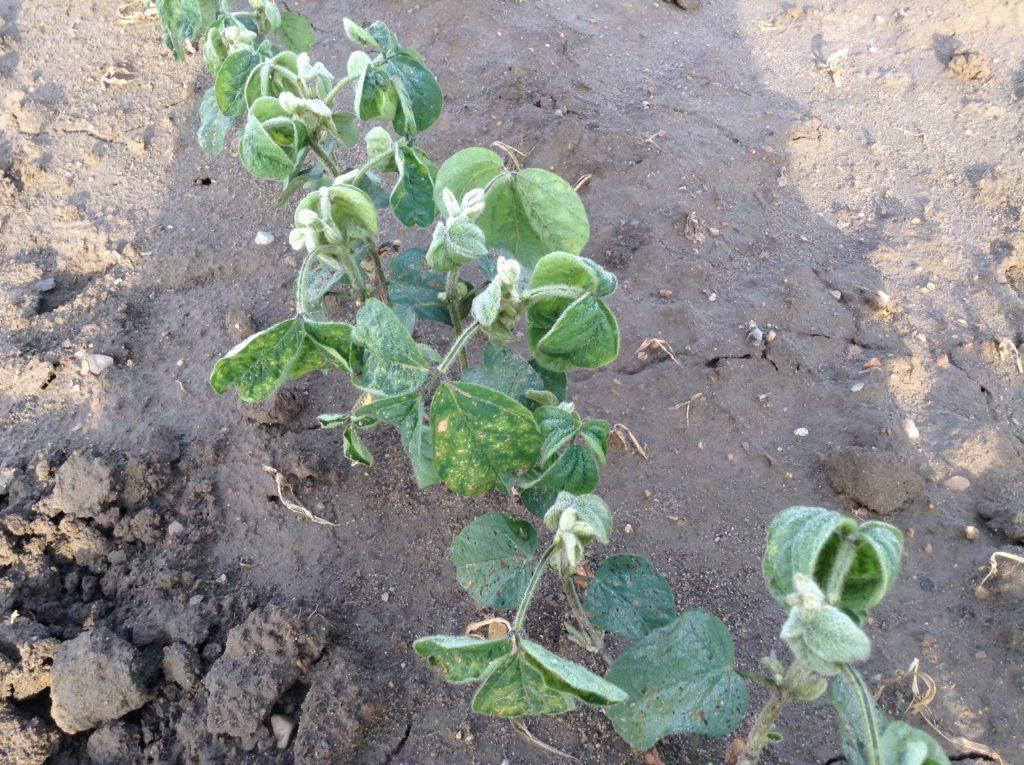 Scenario # 3: This one isn’t rocket science, if you apply Liberty (glufosinate), a non-selective herbicide, to soybean varieties that are not tolerant…they die. 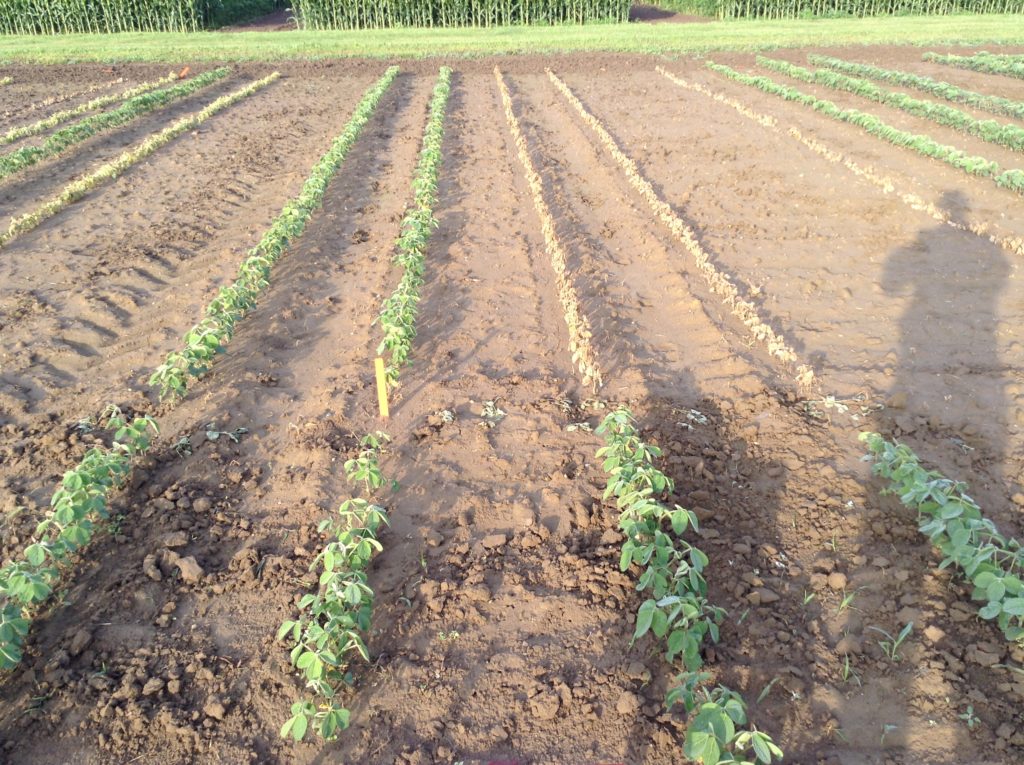 From left to right: Liberty Link, Enlist, Xtend and Roundup Ready 7 days after an application of Liberty at 1 L/ac.

Scenario # 4: During the research and development stage of a relatively new herbicide called Eragon (saflufenacil), the manufacturer did notice differences in soybean varietal tolerance (see the published results here). As many Ontario farmers appreciate, glyphosate resistant Canada fleabane has been becoming an increasing challenge to control in soybean. One of the most effective active ingredients (saflufenacil – found in Eragon, Integrity, and Optill), has generally been effective on Canada fleabane, although higher rates provide more consistent control and occasionally the rate registered as a pre-plant treatment in soybean does not provide as good as control of Canada fleabane as the higher rates found in labelled rate of Integrity applied pre-emergence in corn. So some have wondered whether higher rates of Eragon could be applied ahead of soybeans to improve the consistency of Canada fleabane control? The photos show below that this would be a risky. All varieties are showing some level of injury, but the Enlist and Xtend varieties in this demonstration had injury severe enough to kill plants and reduce the stand. 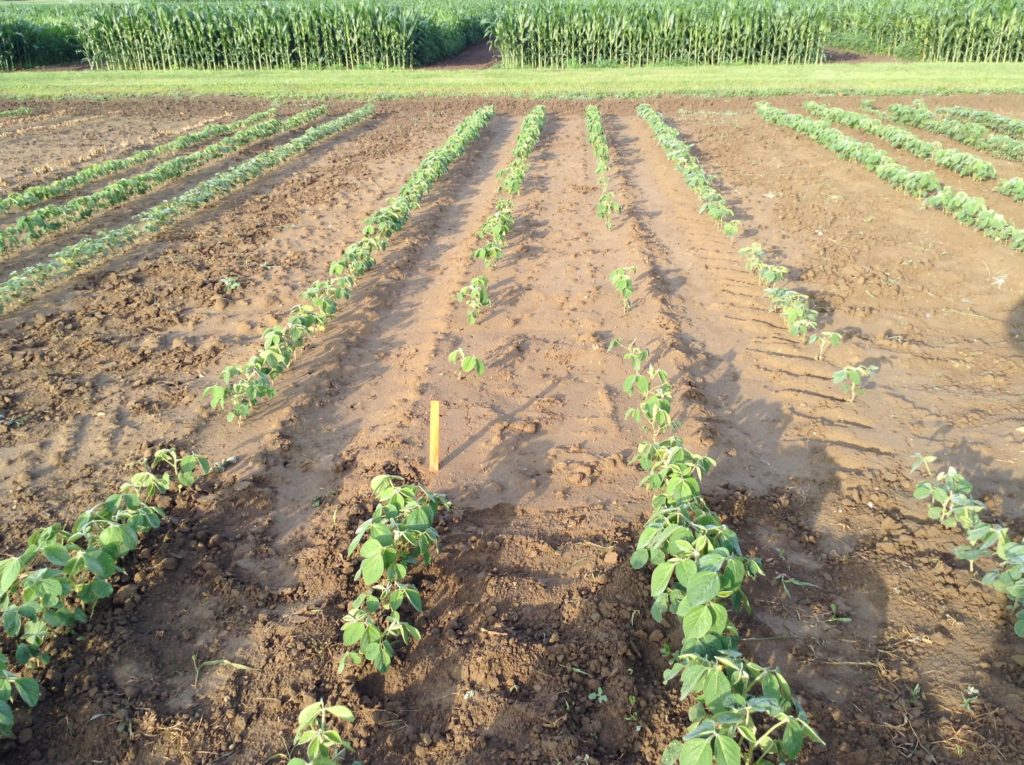 From left to right: Liberty Link, Enlist, Xtend and Roundup Ready after a pre-plant application of Eragon at the rate used for corn, which is 3 times as high as the rate registered in soybean. 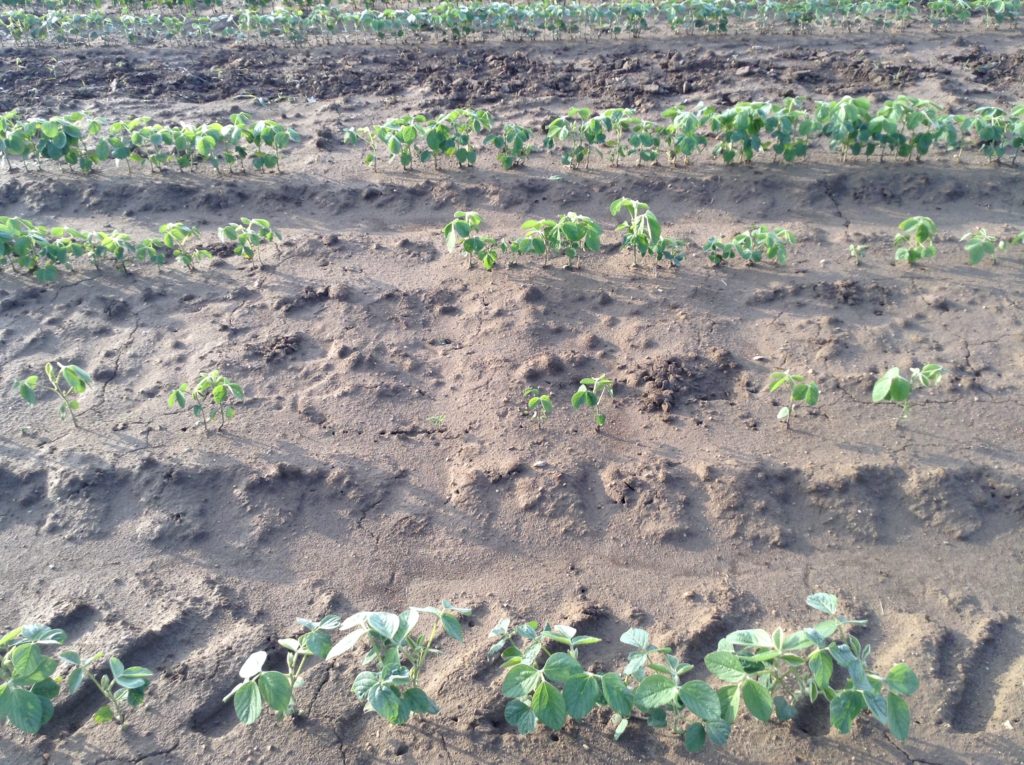 A side view showing the difference in plant stand as a result of plant death from the pre-plant Eragon treatment at the 3X rate. 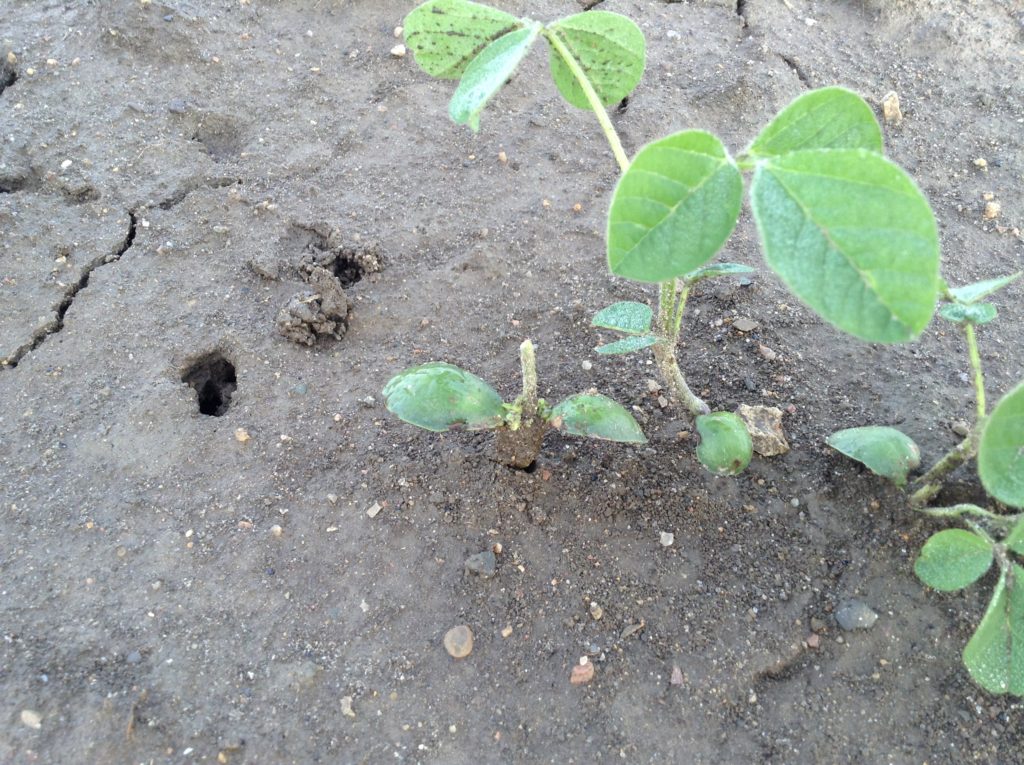 A closeup of injury that results in plant death and stand loss. The plant can’t metabolize the herbicide quick enough resulting in plant tissue that gets burnt off and in worst case scenarios killing the plant.

Scenario #5: This was a bit of a head scratcher because we applied Roundup Weatherman + Xtendimax (dicamba) to our 4 varieties expecting fully to kill 3 of the varieties and have an un-injured fourth (which hopefully would be the Xtend variety). However, when we looked closer to the row we noticed leaf distortion on the lower leaves and some speckling. After asking the research technician about this oddity, it was revealed that in order to minimize the amount of labour needed to hand weed the plots for diagnostic day, a soil applied “group 14” herbicide (i.e. Valtera, Reflex, Eragon, Authority) was applied at the time of planting and a fairly heavy rainfall occurred at the time of soybean emergence which would explain both the leaf distortion and speckling). 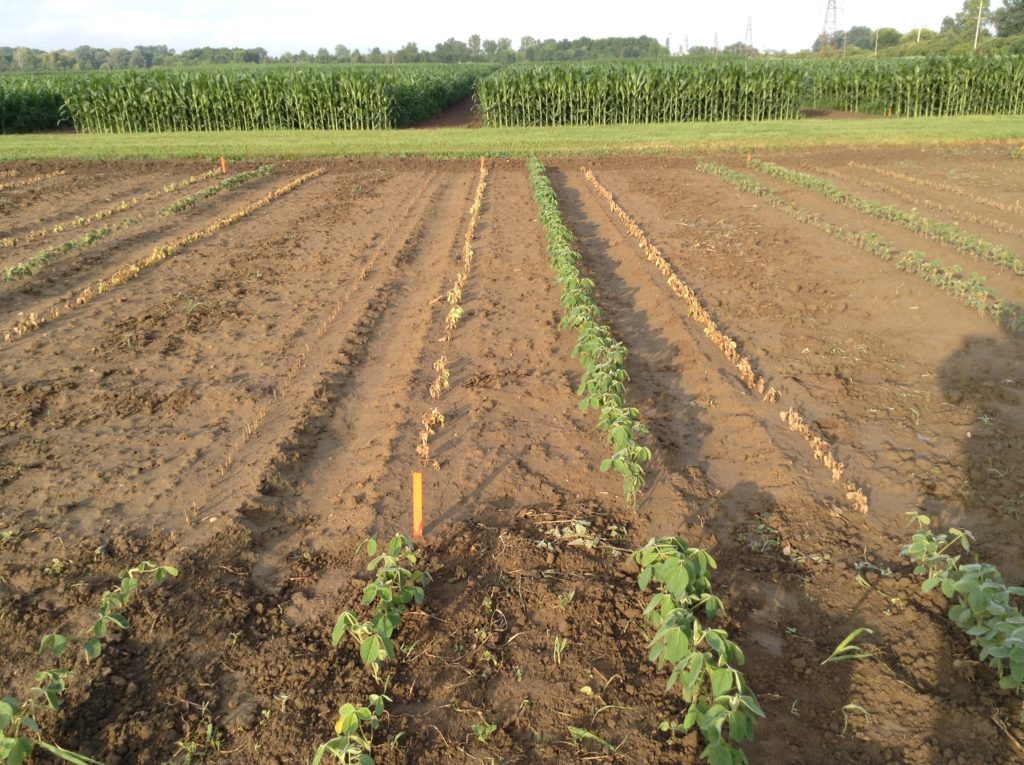 From left to right: Liberty Link, Enlist, Xtend, Roundup Ready 7 days after an application of Roundup Weatherman and Xtendimax. 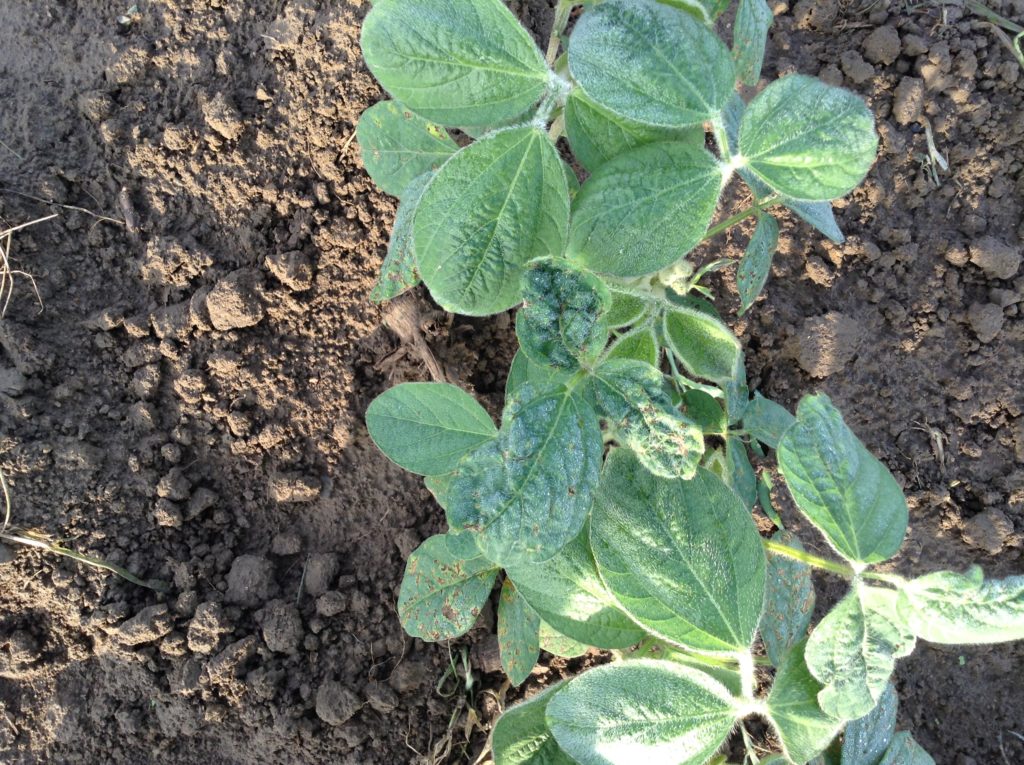 A confusing part of this stop was the uncharacteristic leaf distortion and speckling (we had not seen this before with this herbicide tank-mix applied to Xtend soybeans). Later it was discovered that a soil applied group 14 herbicide was applied at planting. This injury is consistent with that herbicide group.

Scenario # 6: This was not planned. We duplicate all treatments so that we have more options to show participants at diagnostic days. The duplication of Scenario #3 was showing injury symptoms characteristic of herbicide drift from a synthetic auxin herbicide such as dicamba with the cupping of leaves and stunting of internodes. Indeed this is what happened and its a good reminder that synthetic auxins can drift and cause injury to non-target plants and applicators will have to be extra diligent to minimize the risk of off-target drift. If you read the Xtendimax label, its quite specific about how you should apply the product in order to minimize off-target drift. I would direct you to sprayers101.com to look at all the ways an applicator can reduce the risk of drift. 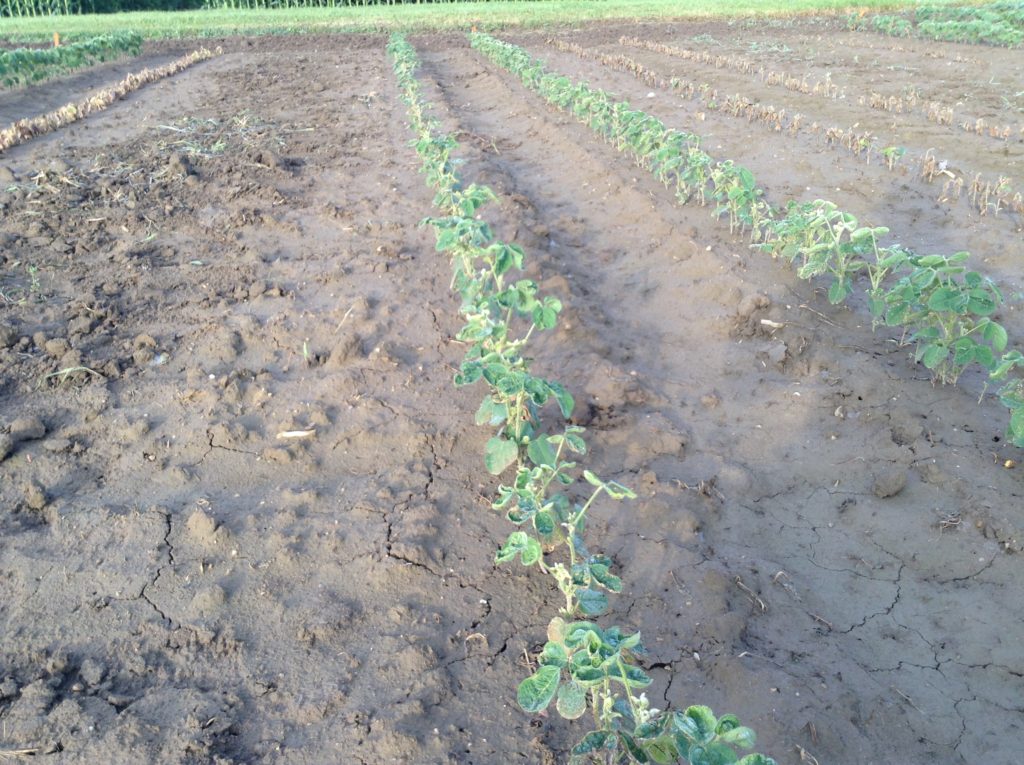 The two soybean rows immediately beside a plot where dicamba was sprayed are showing signs of drift injury. 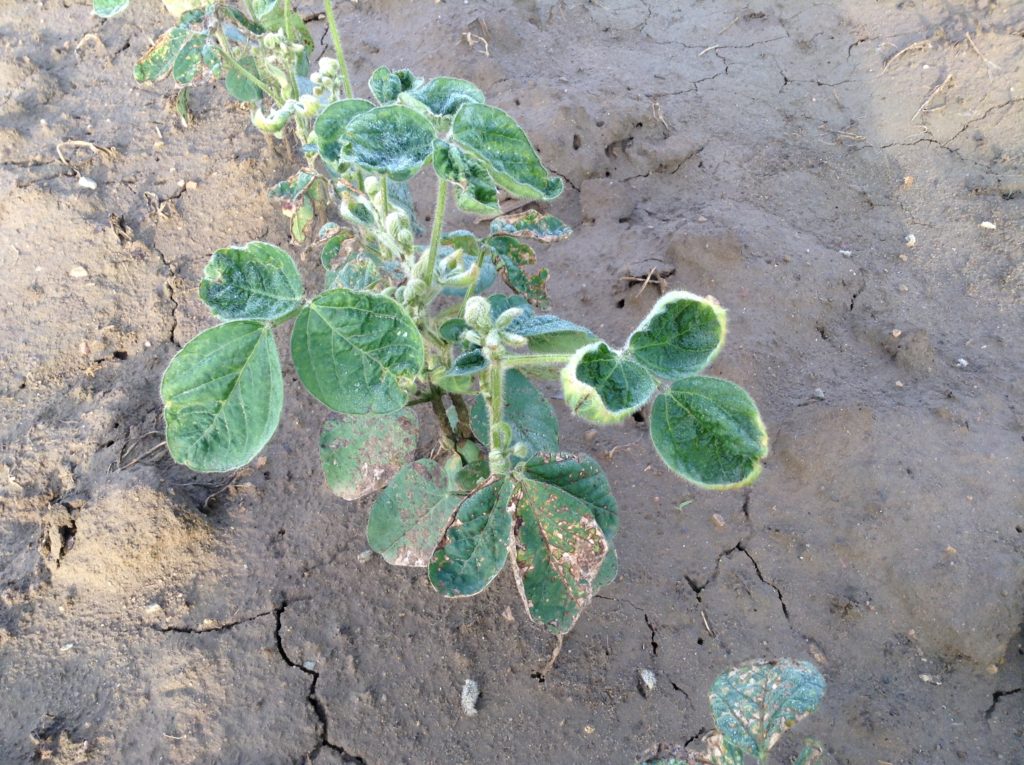 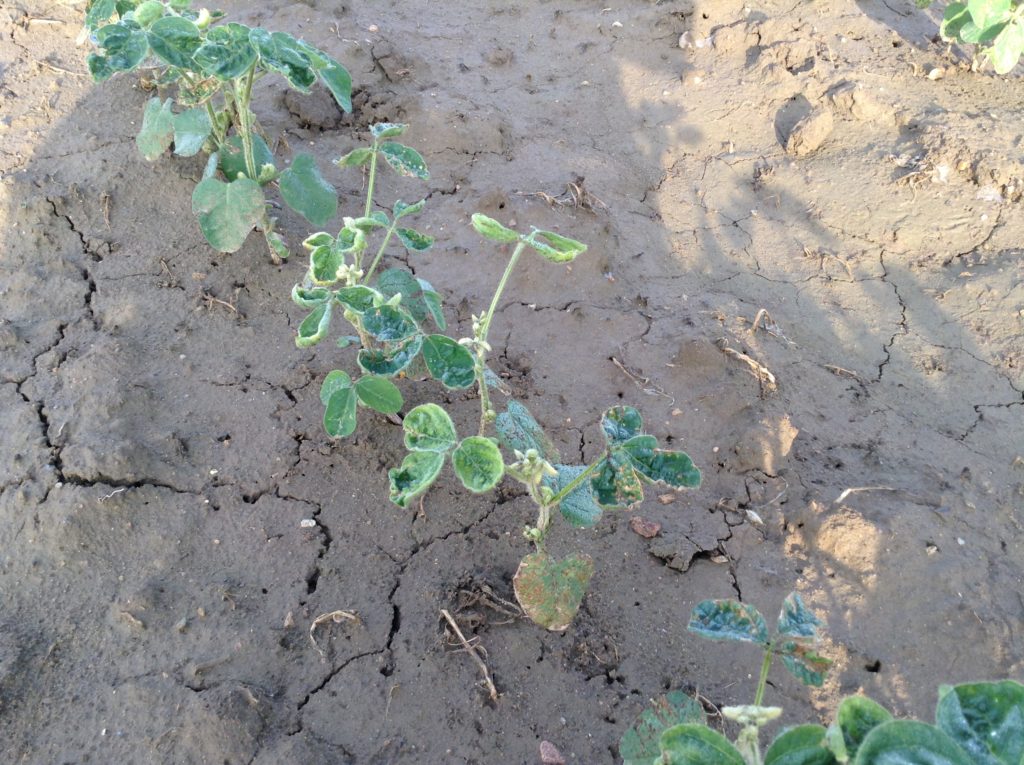 Another shot of plants affected by dicamba drift

Scenario # 7: Pretty simple. If I spray Enlist Duo (which contains glyphosate and 2,4-D choline) then I would expect that the only variety that should survive of the four planted is the Enlist one. the Liberty Link variety not showing the twisting and bending of the stem simply because it was killed by glyphosate first. 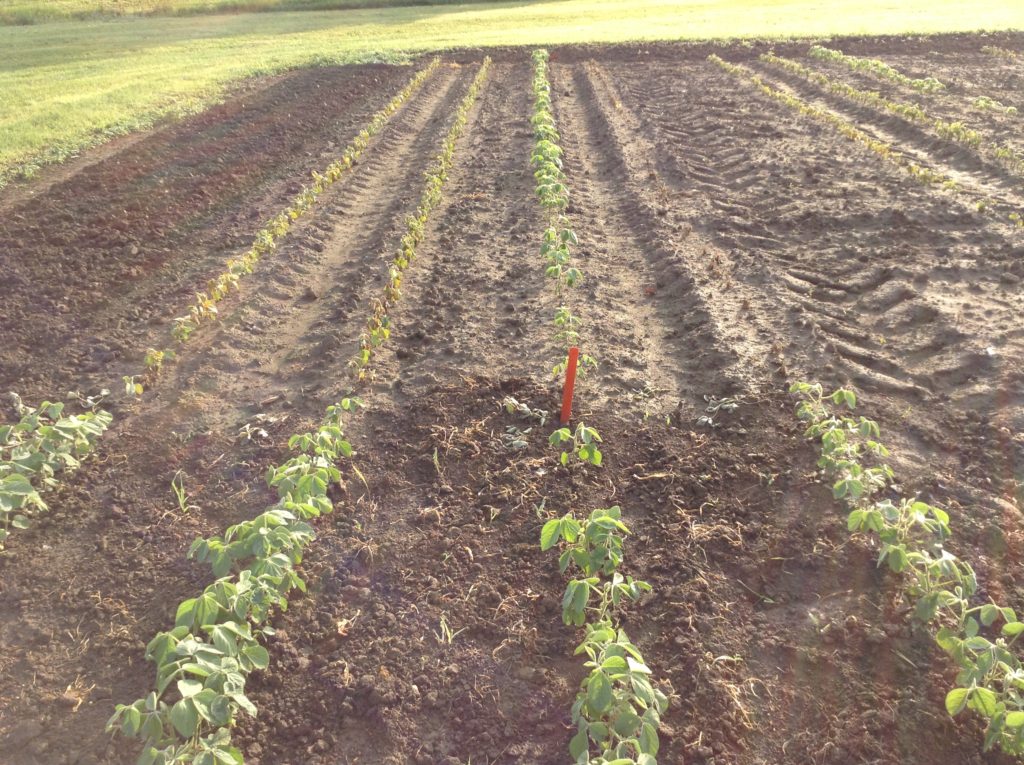 From left to right: Roundup Ready, Xtend, Enlist and Liberty Link 7 days after an application of Enlist Duo. 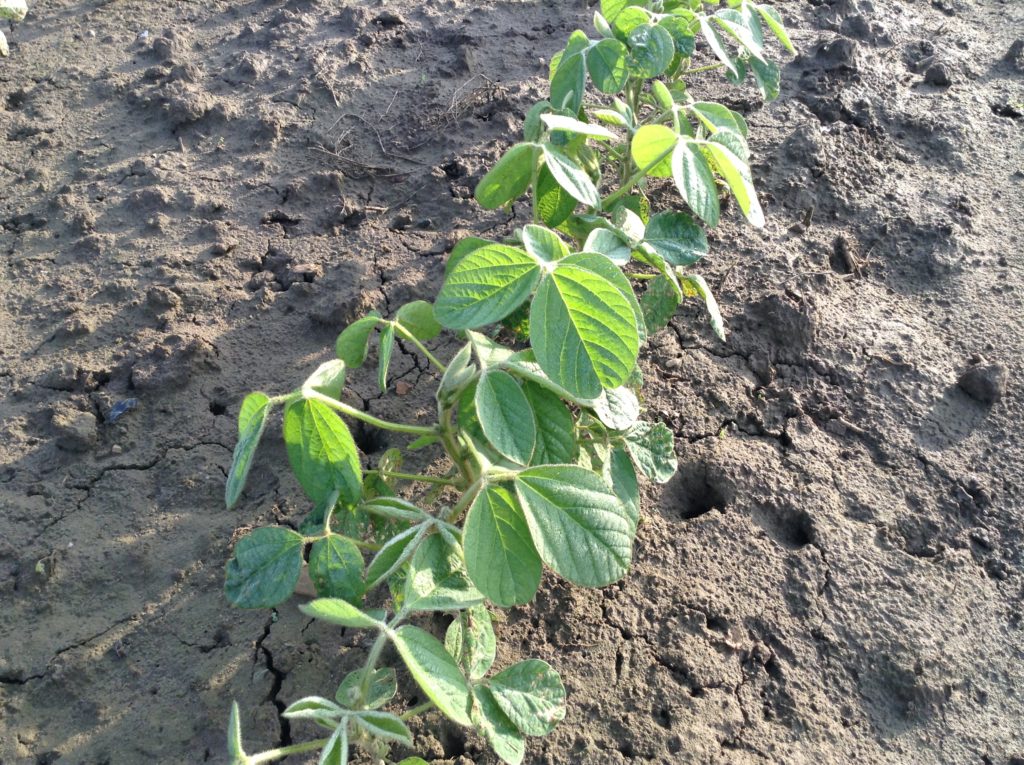 The Enlist variety is the only one tolerant. 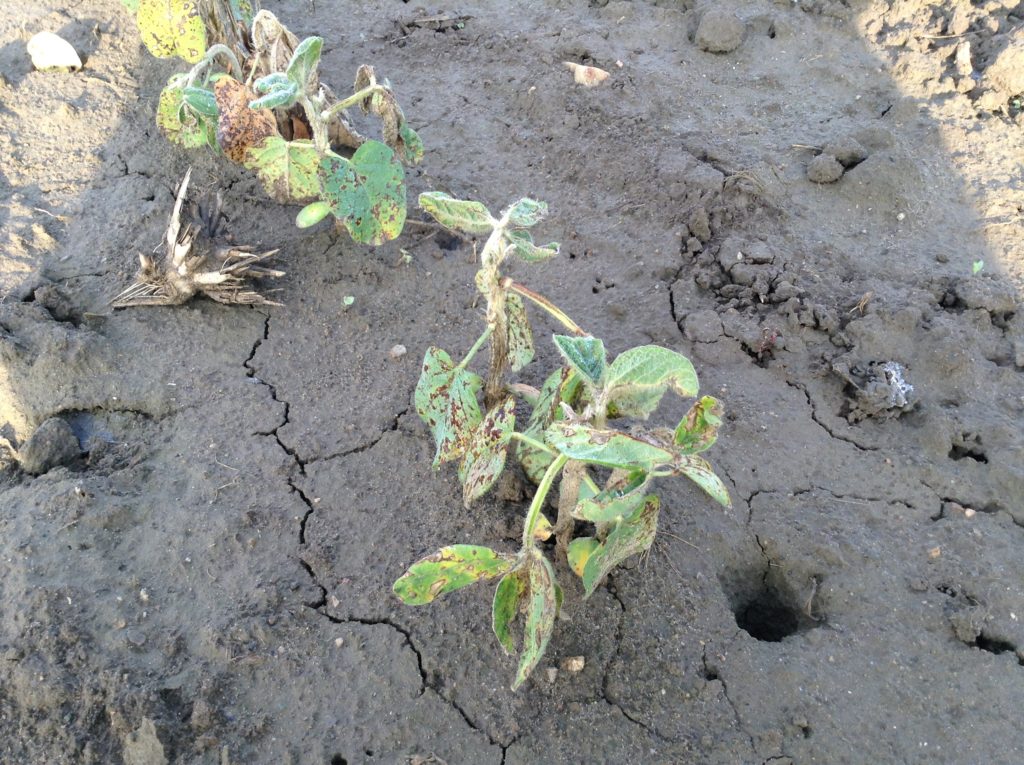 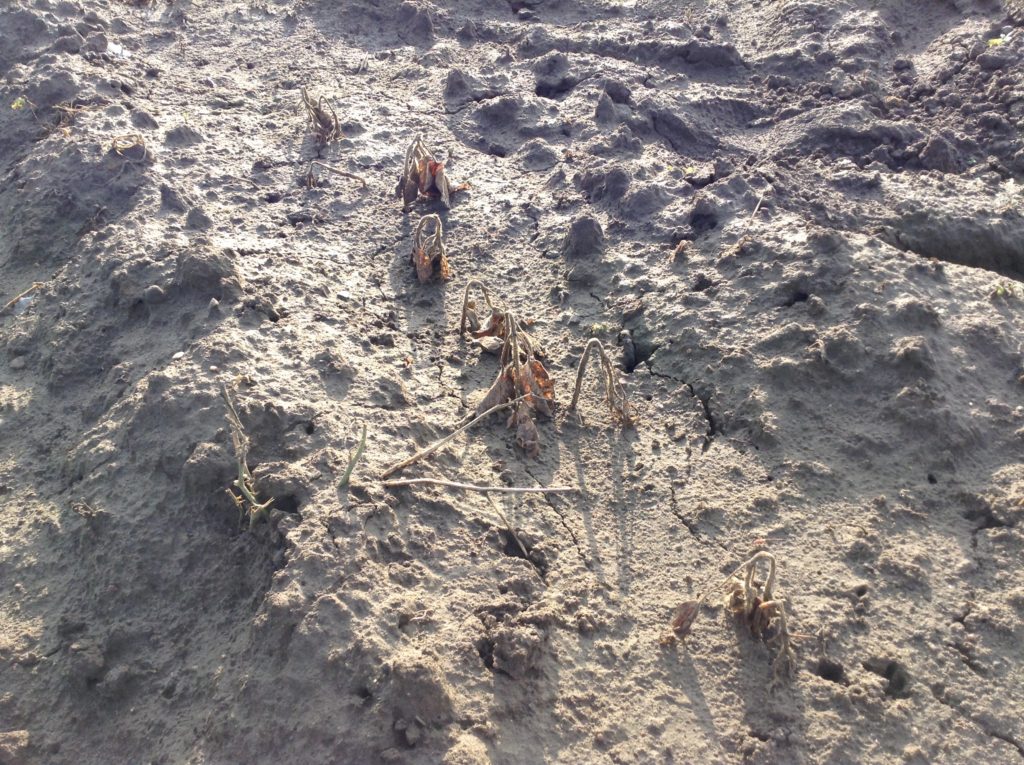 The Liberty Link variety succumbs to glyphosate 7 days after application.

Scenario # 8 and #9: Admittedly new herbicide tolerant technology makes me curious to know how tolerant or sensitive a soybean variety is to other herbicides within a certain class, like synthetic auxins. Since Enlist soybeans are tolerant to 2,4-D, a phonoxy, does this mean its tolerant to other herbicides in that family? What about MCPA? 2,4-DB? When glyphosate + MCPA Ester 600 at 1 L/ac was applied to all 4 soybean varieties, surprisingly the Enlist soybean variety survived and looked pretty decent. This is consistent with a couple of growth room demonstrations that I’ve done in the last two years. However, MCPA will NOT be registered for use on Enlist soybeans. A lot of effort has gone into the development of Enlist Duo for this soybean system and I can’t think of many weed species that would be better controlled by MCPA anyway, plus we’ve looked at it 3 times on 1 particular Enlist variety, so let’s park this in the “that’s interesting” category as there is not a good enough body of evidence to show that what we have observed is consistently repeatable rather than a fluke. 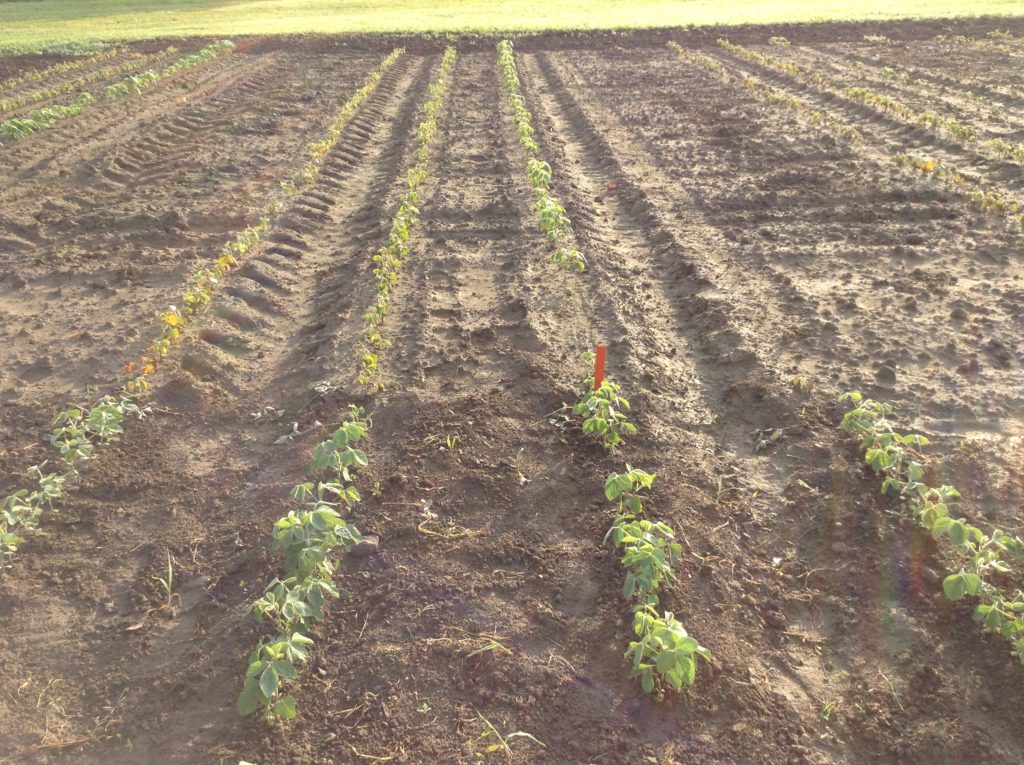 From left to right: Roundup Ready, Xtend, Enlist and Liberty Link 7 days after an application of glyphosate + MCPA Ester 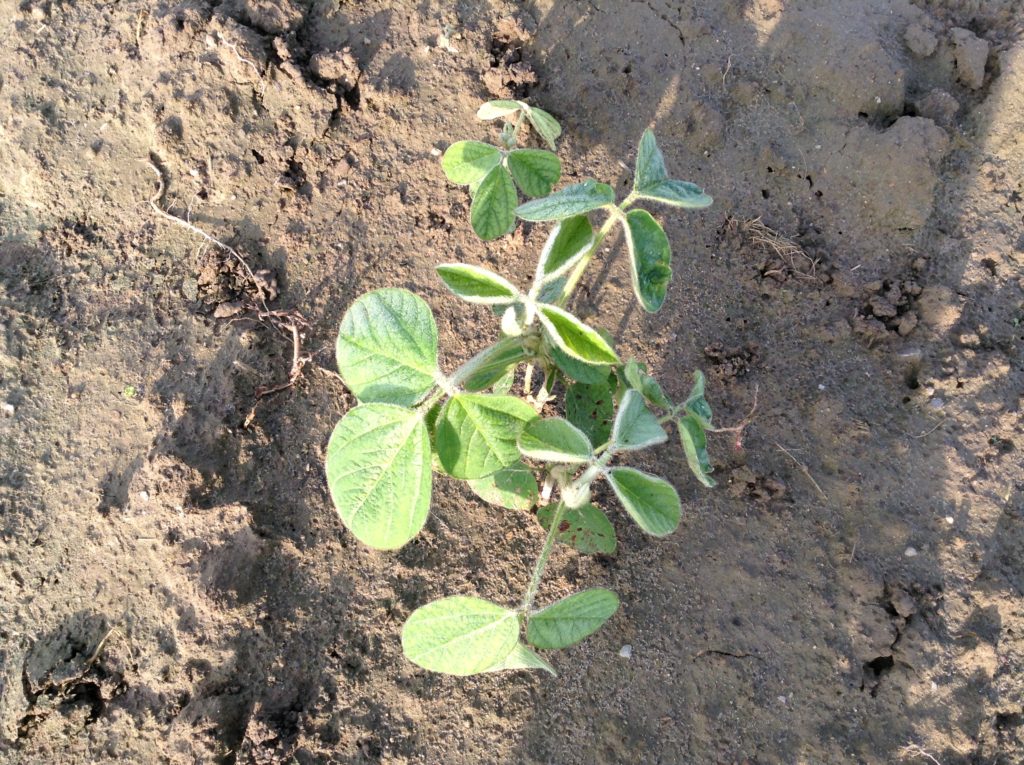 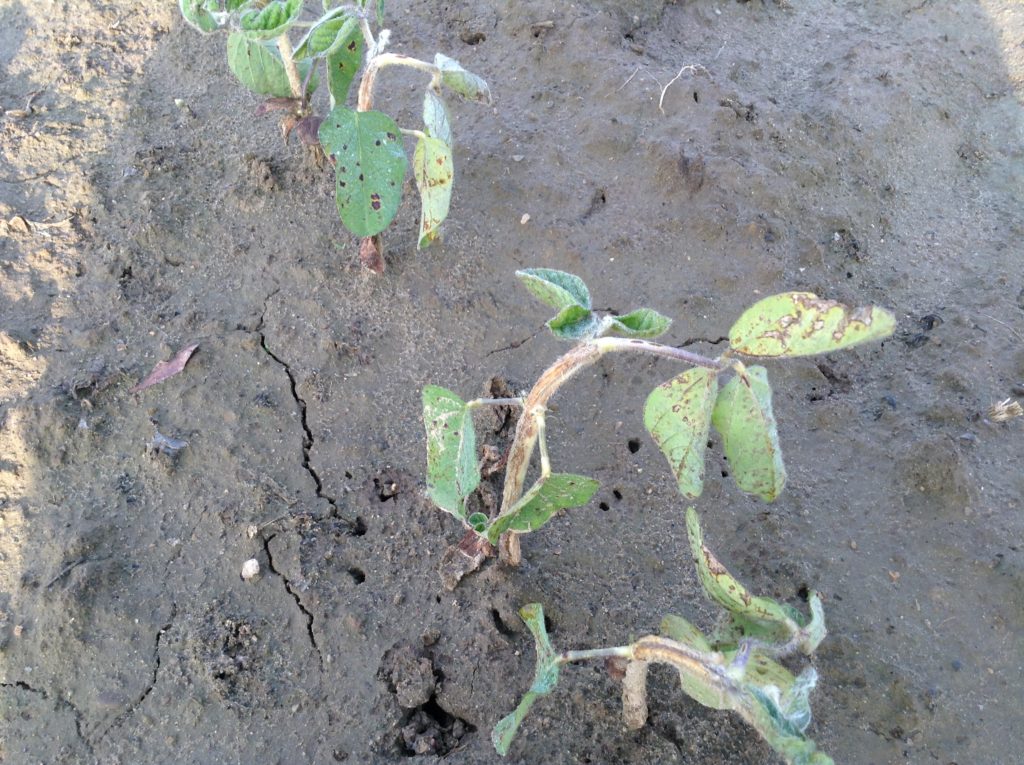 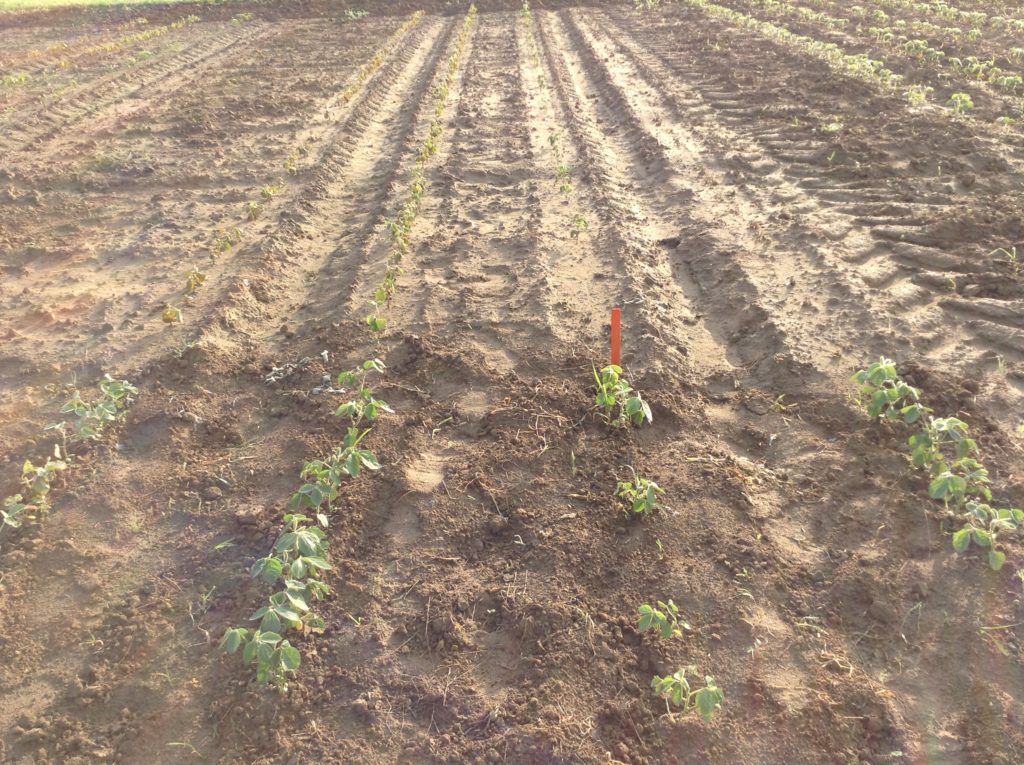 Although I could list all 4 varieties here…isn’t it obvious that they are all dead?

Scenario # 10 This has occurred in the past both as a drift scenario and a tank contamination scenario, but the injury you are seeing below is quite visual. The new plant tissue has a yellow to white colour, some say “it looks bleached” hence the nickname of plant pigment inhibitors or group 27 herbicides known as “the bleachers”. The affected plants are also stunted and have some reddening of leaf veins characteristic of the second active ingredient in a herbicide called VIOS G3. The photos below show tank contamination with a very low rate (approximately 10% of the labelled rate) of the post-emergent corn herbicide called VIOS G3 (tembotrione/thiencarbazone-methyl). 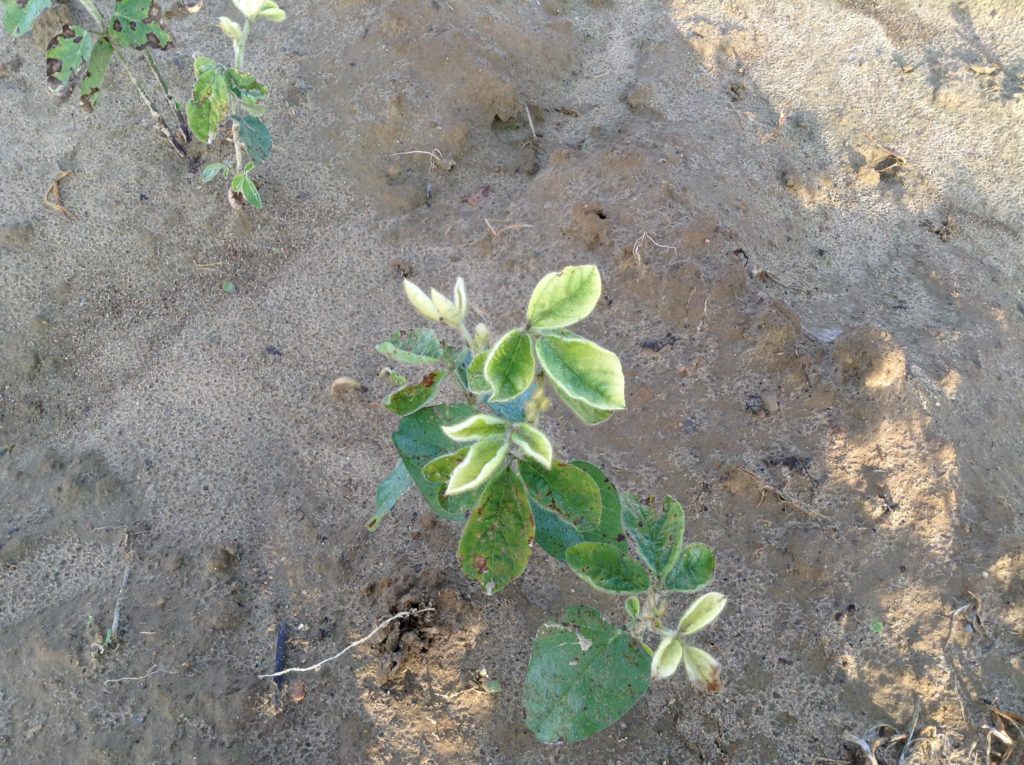 Bleaching and stunting caused by a tank contamination of VIOS G3 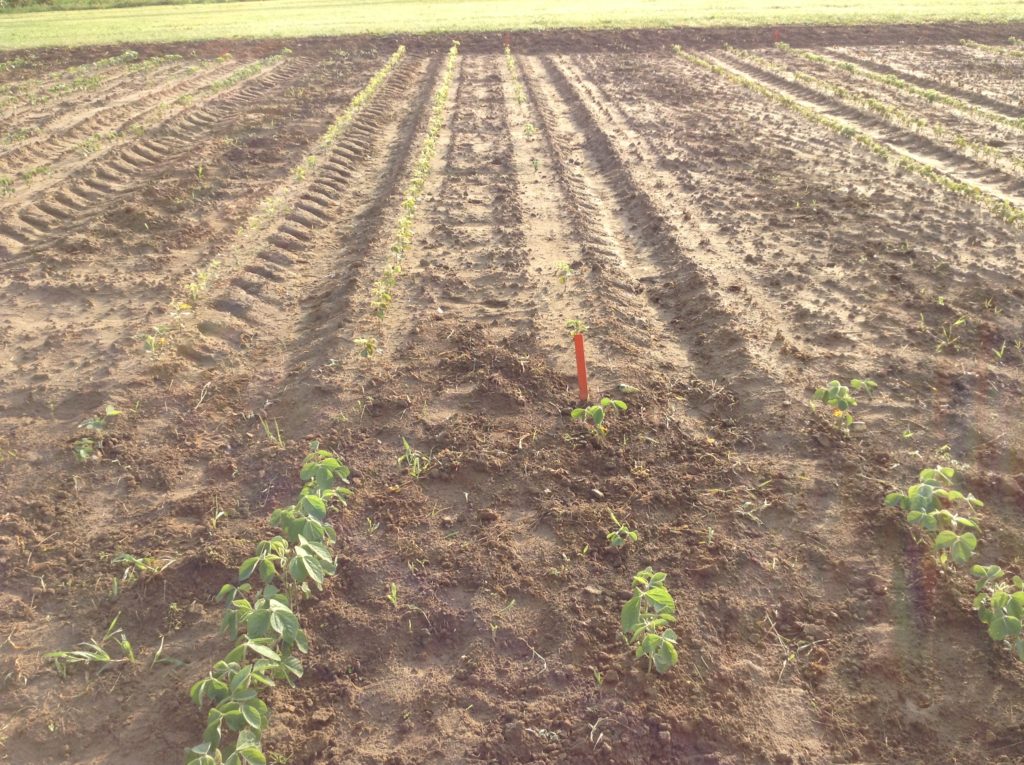 You can see a difference in susceptibility to VIOS G3 tank contamination between the Roundup Ready, Enlist and Xtend beans. The Liberty Link beans (far right) are not tolerant to glyphosate which was also tank-mixed with VIOS G3.