Lots of people have been sending in pics of eggs, nymphs or adult stink bugs and asking which stink bug it is. So I thought I’d try to help sort them out for you.

There are predatory stink bugs and then there are plant feeding stink bugs. It is important to make sure you can ID the good ones from the bad ones. Most are brown with the exception of the green stink bug. 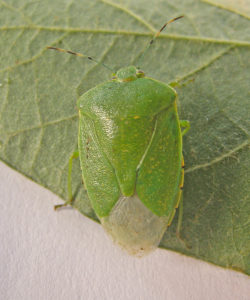 Green stink bugs are the easiest to ID. The adults are quite large and green. The nymphs are very colourful with black, orange and green-yellow markings and are easy to distinguish from others. 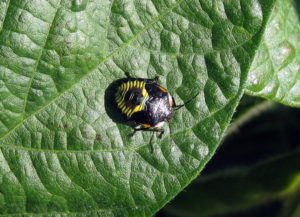 There are a few brown coloured stink bugs which are a little more difficult to sort out. I put together a Brown Look-A-Like Stink Bug Guide to help with identifying the adults and eggs. Nymphs look similar to the adults but lack wings.

Rarely do we need to spray for stink bugs, though control may be warranted in IP food grade and seed soybeans if an average of one brown stink bug or green stink bug per 30 cm (1 ft) of row or 0.2 bugs per sweep is found during the R5 to early R6 stages.

Brown marmorated stink bug is very different in terms of impact but has not been found in crops in Ontario yet.  Thresholds for this invasive pest are different from above. If you find brown marmorated stink bug in the fields, please contact the OMAFRA Ag. Contact Centre at 1-877-424-1300.  We will respond quickly to alert growers and implement appropriate management strategies.