Winter Wheat: The winter wheat crop looks excellent.  There is lots of growth with excellent yield potential.  There is a fear that putting on too much nitrogen at once will cause stem elongation and lodging. Some farmers have opted to split apply nitrogen to reduce the risk of lodging. A foliar leaf fungicide application (T1 timing) will help the wheat to stand better. There have been reports of wheat leaves that have turned purple recently (see Figure 1). This leaf purpling could by genetic but more likely a stress response to large fluctuations in air temperature or other stressors like saturated soils. These stressors will “back up” the cereal plants enzymatic processes associated with photosynthesis and often leads to a deficit of phosphate, throwing photosynthesis off balance and unable to deal with all of the light energy. Anthocyanins are there to protect the chlorophyll and light harvesting complexes from photo-oxidation. One could view this as a cereal plant covering itself in sunscreen to protect it from getting a bad sun-burn. This condition of anthocyanin buildup is not considered to negatively affect yield and has corrected itself with the warmer air temperatures. 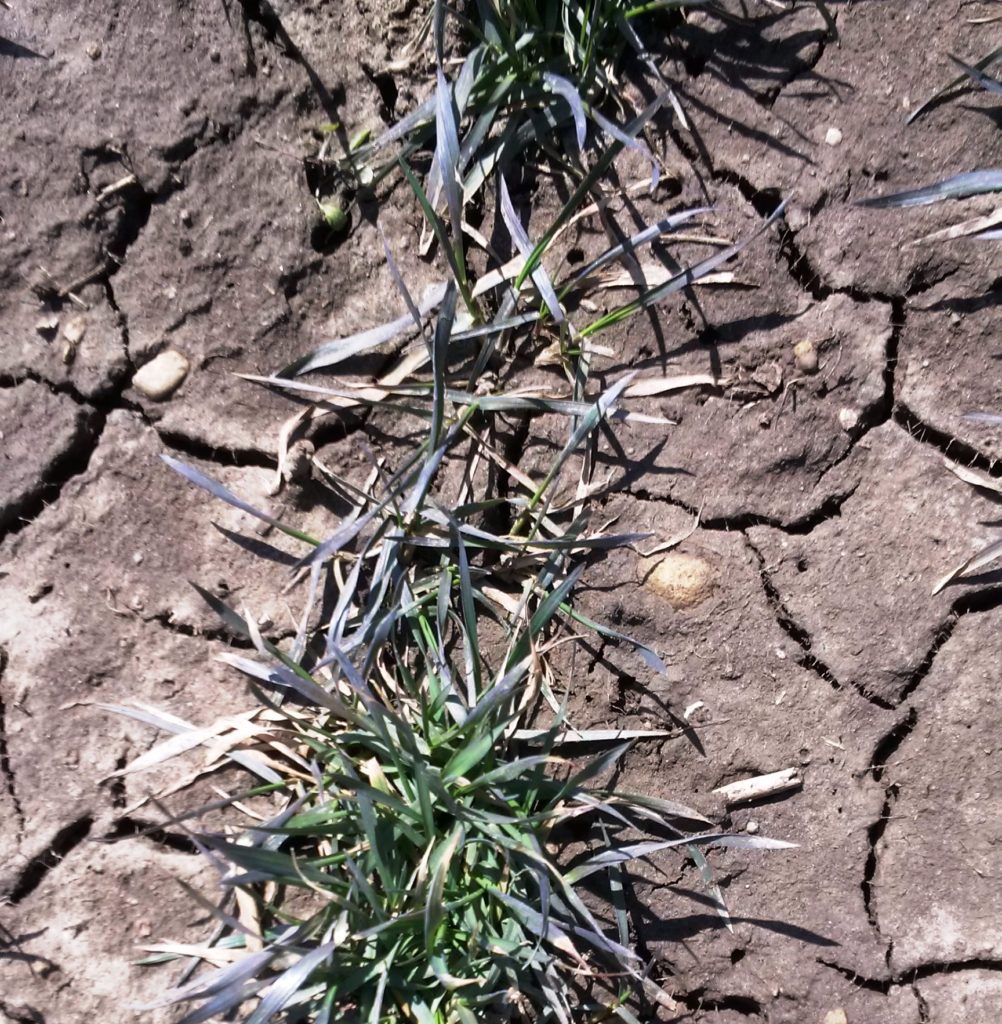 Purple leaves on wheat is a response to temperature fluctuations and is not thought to negatively impact yield. Source: Joanna Follings

Corn: Some farmers have dabbled in planting a small acreage of corn but provincially there would be less than 1% of total acreage planted. Most of the planting that occurred during the week of April 18th was to test out planting equipment or for test plots. Should the long range forecast of little rain and warmer conditions hold, a lot of corn will get planted near the end of April and into the first week of May. Planting depth should be around 5 cm (2”) as shallow planting (less than 3 cm or 1.25 in. deep), even into moisture, may lead to less favourable positioning of the growing point and first nodal roots. This may lead to rootless corn syndrome. Coarse-textured soils that dry rapidly at the surface will also be more prone to poor root establishment with shallow plantings. To minimize yield losses from weed competition the corn crop should be kept weed-free from emergence until the 6 leaf over stage. If the goal is to minimize weed seed return, a farmer would extend that weed-free period until the 8 leaf over stage.

Soybean: Planting date is an important management tool to maximize yield potential. The highest yields of soybeans are obtained from early plantings, generally the first 10 days of May. Soybeans are more sensitive to soil temperature than corn. However, if soil temperature and moisture conditions are suitable for planting corn, they are generally also suitable for soybeans. A hard spring frost can kill early-planted soybeans, since the growing point of the emerged seedling is above the soil surface. However, soybean plants can withstand temperatures as low as -2.8°C for a short period of time, while corn experiences tissue damage at -2°C. Many winter annual and perennial weeds are growing fast (Figure 2) applying a pre-plant burndown to control such weeds as soon as possible will improve the chances of planting in to a clean seedbed in no-till and minimum till production systems. To minimize yield losses from weed competition the soybean crop should be kept weed-free from emergence until the third trifoliate stage. 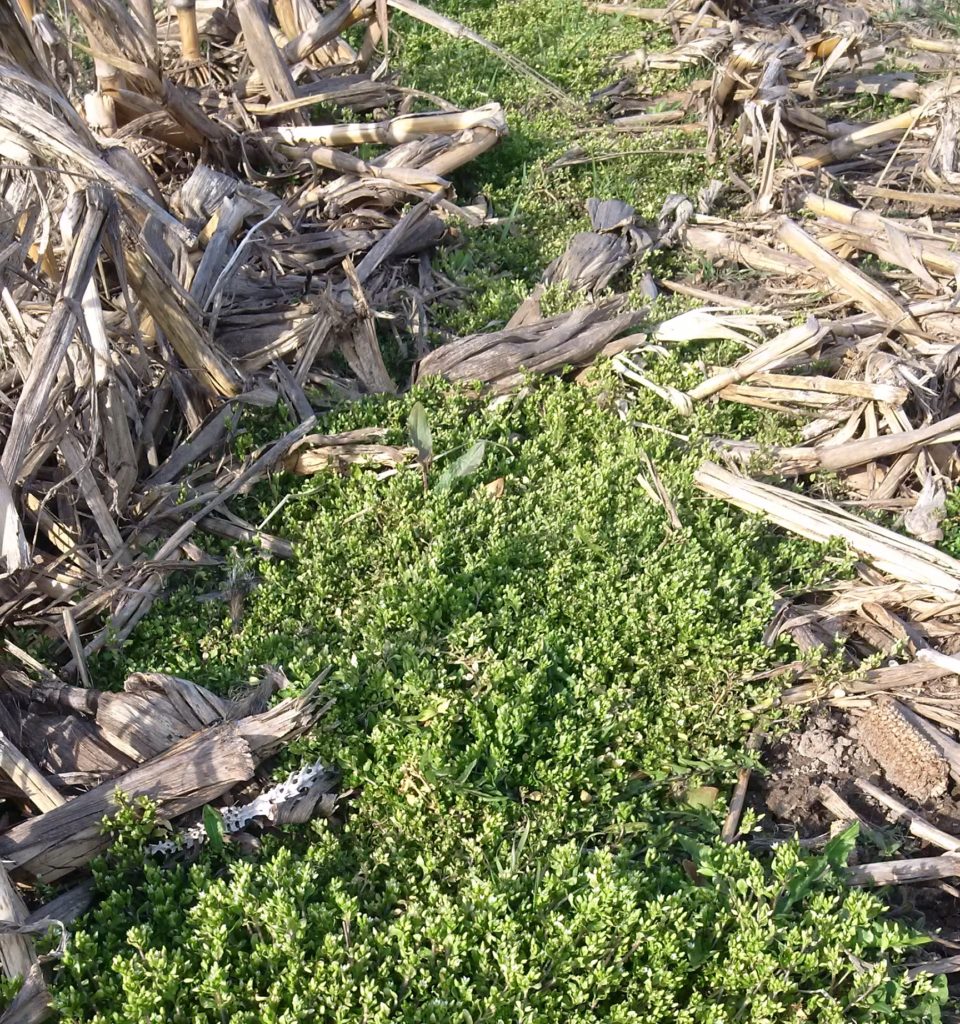 Common chickweed growth in corn stalks slated for soybeans, a pre-plant burndown should be done to remove this carpet of weeds prior to planting. 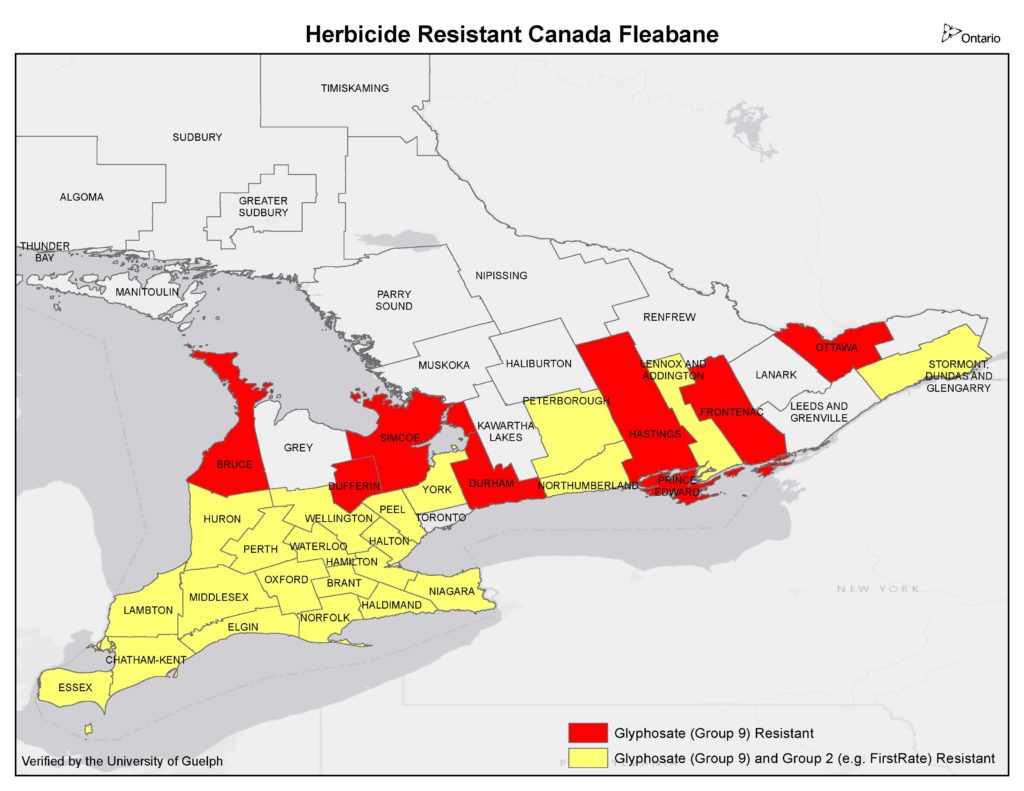 Counties with Canada fleabane resistant to glyphosate and group 2 (e.g. FirstRate) from 2010-2015

Control will be a challenge as the plants get so large. At least two modes of action are required and using 20 gallons per acre of water is also recommended. Trials conducted by Dr. Sikkema at the University of Guelph (Ridgetown Campus) have shown that Infinity herbicide is the best choice available for the control of Canada fleabane in winter wheat.  Control in soybeans is the real challenge and results have been variable from field to field.  Glyphosate plus Eragon plus metribuzin (e.g. Sencor) plus Merge has given more consistent control compared to just Glyphosate plus Eragon plus Merge.  There are no in-season herbicide control options that work in soybeans for resistant fleabane.