There was a general discussion of what condition hays fields are in given the milder winter.  A general observation of hay fields in the area is that most fields had quite a bit of stubble (estimated at 2 feet for some fields).  Some discussion of what should be done with the stubble (harvest or leave it on fields) concluded that the heavy machinery would do more damage to the alfalfa crowns and leaving it on the fields is probably the best option.  It was commented that a research study suggested removing hay stubble would only moderately increase protein in the feed and decrease NDF.

Fields have been too wet for proper inspection of potential root damage and winter survival.  Once fields dry up, producers will be able to get a better idea of the alfalfa root conditions and stands.  Some livestock producers have manure storages that are running fairly high so getting the manure onto fields is becoming a priority.

There was some discussion around Roundup Ready alfalfa and that seed supply is limited for the year.

There was concern as to whether the variable spring weather conditions had negative effects on winter wheat survival. Most of the winter wheat in the area went into the winter in excellent condition. At this point not a lot of fields are showing growth; however, winter wheat is just beginning to green up in some fields.  Winter wheat growth varies considerably across fields and typically dead patches are found in the low spots.  It was discussed that the variability in the winter wheat growth is primarily due to where the snow melted and then iced up smothering the winter wheat plants in those areas.  It was estimated that there will probably be a 10-20% loss in winter wheat stands this year; however, overall it is still considered to be a good crop.  Agricorp mentioned that to-date they have only received a handful of crop damage claims for winter wheat but they expect to get more as producers assess the survival of their crop in the coming weeks.

There was some discussion as to whether geese damage last fall played a role in reducing winter wheat stands.  It was suggested that this probably wasn’t an issue since geese will feed on corn when temperatures are cold and feed on wheat when it’s warmer.  Gilles Quesnel had done a simulated Spring Geese Feeding trial at the Winchester Research Station in 2010. The table below shows the impact on yield from mowing at 3 stage of early development of the winter wheat in the spring: 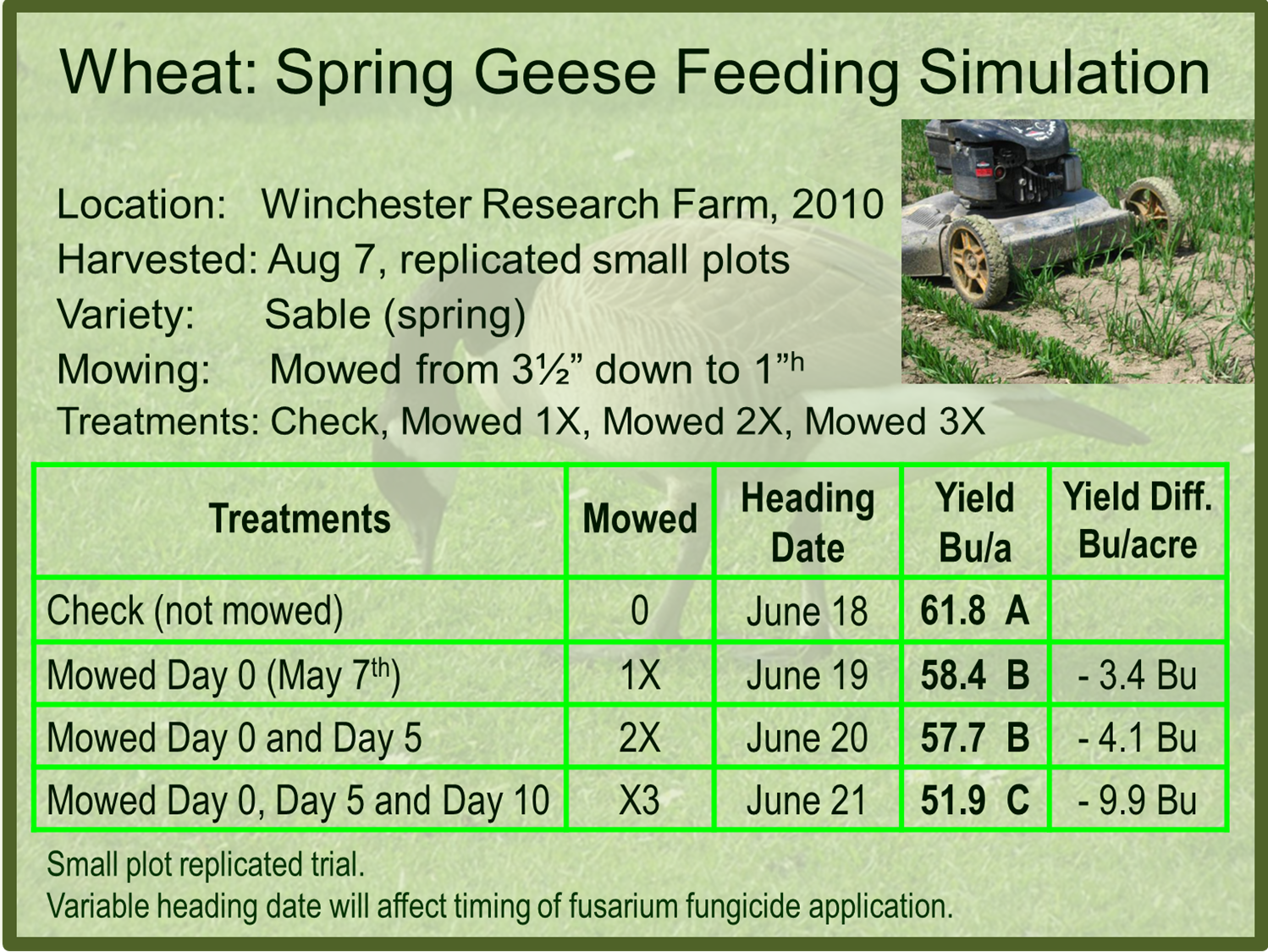 There was some discussion that some producers will interested in inter-seeding spring wheat in the patches of killed out winter wheat.  Approximately only 10% of the winter wheat fields were seeded with red clover as producers don’t want the clover growing up in the straw.

Spring Wheat: There is still some interest among producers to grow spring wheat given last year’s yields of 70-80+ bushels/ac; however, there seems to be no increased acreage due to price and past concerns of Fusarium Head Blight in the spring wheat crop.

Under the new MOECC neonicotinoid regulations (effective July 1, 2015) a new class of pesticides has been created, known as Class 12 pesticides.  This class applies to corn and soybean seeds treated with imidacloprid, thiamethoxam and clothianidin (neonicotinoid insecticides).  Only the neonicotinoid-treated seeds that vendors have put on the “Class 12 Pesticides List” can be purchased.  Corn and soybeans seeds treated with only fungicide are not classified as Class 12 pesticides.   These new regulations has created a lot of extra paperwork for producers and seed industry personnel.  In some cases the extra paperwork process is causing delays with delivery of seed.  This is the first year MOECC will be conducting field visits to monitor pest population densities.

There was discussion surrounding the treatment of white mold in soybeans.  The consensus was crop rotations and no tillage are probably the best practices to reduce white mold pressure.  Fungicides like Acapela can also be useful in suppress white mold; however, it typically takes 2 applications at the high rate, first at the R1 to R2 stage and the second application 10 to 14 days later. It is estimated that 5-6 bushels/acre of crop yield are required to cover product and application costs. A comment was made that over the years increased white mold pressure has been observed to be greater in tilled fields as compared to reduced or no-till fields.

Agricorp suggests that producers should make sure crops are properly insured as this may be a challenging year for corn and soybeans.  It is now an option to insure barley and oats separately from grains.

Under Agricorp’s Production Insurance – Bee Mortality program, which covers bee mortality during overwintering, only one claim so far this season.

Tuesday, April 26, 2016. The Winchester Agri-Business Crop Update breakfast meetings are held every two weeks on Tuesdays at the Country Kitchen (Winchester, ON) from 7:30 to 9:30 a.m.  .