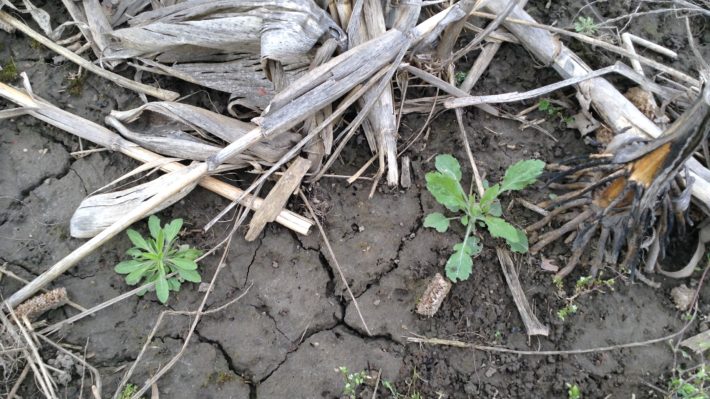 Corn: Across the province the planted corn acreage sits at about 85%.  Livestock producers with manure to apply, as well as fields located on heavy clay soils -especially in Essex, Haldimand and Niagara- have about 50% of the intended acres planted.  Soil conditions look dry at the surface, but remain “tacky” at planting depth.  Cool soil temperatures have delayed emergence.  Planted corn is taking about 3 weeks to emerge, and growers are scouting for impacts from insects and/or disease to un-emerged seed. (See  “Stand Loss Assessments for Ontario’s Neonic Regulations” for more information). Recent rains, ranging from 10 mm to 50 mm, have not resulted in concerns for emergence due to crusting.

Cereals: Winter wheat crops continue to impress.  The growth stage of wheat ranges from Zodak 32 to 37 (2nd node to flag leaf).  Disease levels remain low and limited mainly to the lower canopy.  Reports of septoria, stripe and leaf rust have been limited; however scouting will occur to monitor disease progression when seasonal temperatures return.  Cool conditions will result in a shorter crop with less risk of lodging than originally expected.

Sulphur deficiency is apparent in many wheat and rye fields. There are several reasons we could be seeing more deficiency this spring, including lower industrial sulphur emissions and cooler temperatures that have slowed the response from applied ammonium Thio-Sul and potassium Thio-Sul.

Fusarium Head Blight risk may be higher this year as a result of the weather conditions.  The cool conditions may result in delayed spore dispersal this year which may correspond to the critical wheat heading stage.  Growers are advised to scout their fields, note variety susceptibility, weather forecast and DONcast to best coordinate need for FHB fungicide application at flowering.

Winter Rye is beginning to head and spring cereals have emerged uniformly and are off to a good start.

Soybeans: Planting in underway with about 15 to 20% of soybeans planted.  Forecast frost and snow halted weekend planting to reduce potential of cold water impact on seedling emergence and vigour.   Burndown treatments are being applied, especially where Canada fleabane pressure is high.  The best method for controlling glyphosate resistant Canada fleabane is to control it before the soybeans are planted to within 3 days of emergence.  Where Canada fleabane is 20 to 30 cm tall (8-12”) a high water volume of 20 gallons is encouraged to get adequate coverage.  Growers who plant soybeans without a burndown will have limited options for control.

Forages: Cereal rye planted as forage as well as some old alfalfa stands have been cut and harvested and will be planted to corn or soybeans.   Alfalfa hay harvest for dairy producers on a 4-cut rotation will begin next week.  Crop growth has been slower than average due to cool conditions, but stands look uniform and thick with very little winter damage.

Canola: Nearly all canola is in the ground, except for some in the New Liskeard area. Most has already emerged and is looking good, with the hopes that Tuesday and Wednesday morning’s frosts were not an issue. Acres of canola in Ontario are about 20% higher than last year. Producers increased acreage with the good planting conditions and strong price. Most of the additional acres are in the canola growing regions in the southern half of Ontario, where the risk of swede midge has historically been lower.

Fleabane, both Canada and annual types, are present in high numbers. Not all is confirmed as glyphosate resistant, but producers are treating it as if it is. Glyphosate and Group 2 resistant Canada fleabane has now been confirmed in Bruce and Grey counties. Canada fleabane (left) beside an annual fleabane plant (right). These are two different species with only Canada fleabane have populations confirmed that are resistant to glyphosate in Ontario. Waterhemp looks similar to other common pigweed species in Ontario but the key feature that separates it from the others is its complete lack of hairs on the stem and leaves. 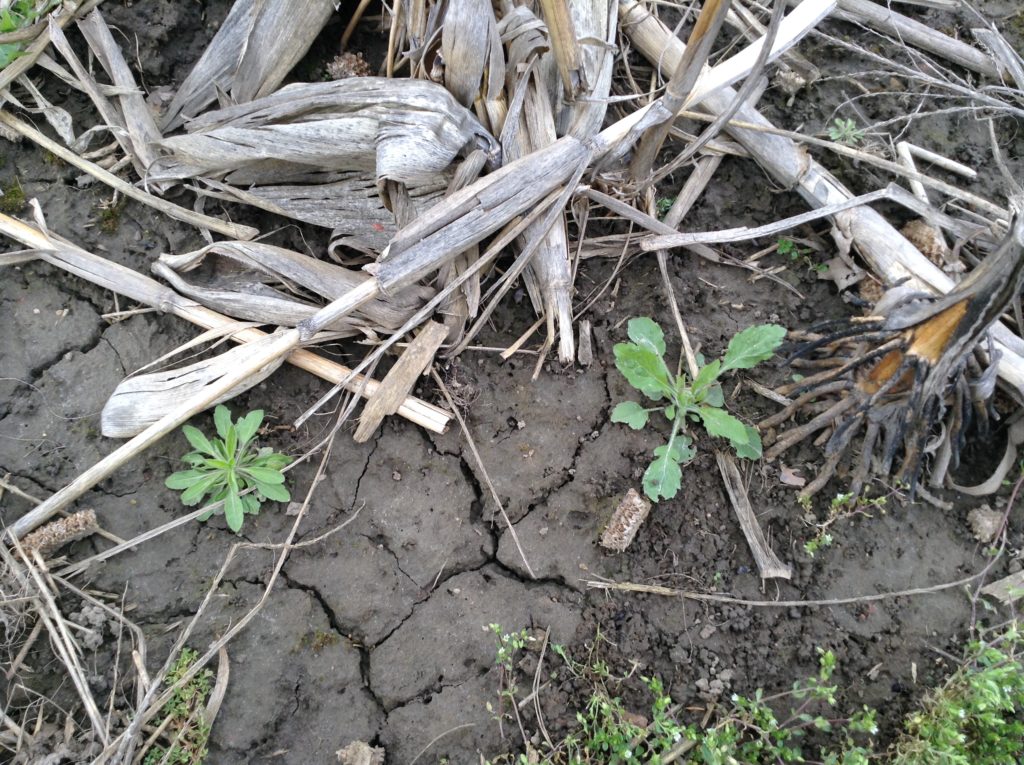