Synopsis: Over the past week 12 to 25 mm of rain combined with cool conditions and frequent frosty mornings have slowed field work in the area.  Current weather forecast of more seasonal and drier conditions could see a big push in field activity later in the week.

Wheat growth continues to look excellent with growth stage ranging between 1st node and elongation (Zodak 31 to 37).  Disease levels are very low with some Septoria in the bottom of the canopy.  Cool conditions have helped keep the disease levels in check.  In a few fields with thick lush growth, there is increasing septoria and some powdery mildew moving higher in the crop canopy.

Most fields have had some nitrogen applied, although there are some fields on the heavy clays still waiting for their first application.  Some fields with split N are still in need of their 2nd application.

Corn planting progress ranges from 0 to 15% completed.  Almost no corn has been planted, to date, in on the heavier soils of Haldimand and Niagara.  Experience from past years would suggest that planting into cold and saturated clay soils is not conducive to good emergence and that seed is better left in the bag until better conditions.   Seedbed preparation has been occurring as soils are fit.  Forecast warmer temperatures and extended rainfree days will see the potential for a lot of acres to be planted in a short timeframe.

Corn that was planted 1 wk ago – wire worm easy to find – and not much radical development yet.

Very few soybeans have been planted to date.  Burndown herbicide application is occurring

New seeding alfalfa – most of the crop went in 1.5 wks ago – coteledons just coming up from first planted fields.   Winter survival of established alfalfa is excellent except in areas where water was ponded for an extended period of time.

Weeds are present in some fields with ragweed and lambsquarters and other annual broadleaf weeds just starting to emerge.  Winter annuals are beginning to bolt.  Lots of chickweed and fleaband – some fleabane is already at 6 inch diameter.  Control options have been more challenging with cool weather.  2,4-D option is running out of time for soybean fields.

Cover crop survival has been better with the mild winter.  Most annual rye grass has survived and some oilseed radish (daikon radish), crimson clover and hairy vetch have also survived.  Control of oilseed radish is easier if done before it bolts.

One weed that is especially predominant in the area this year is Scentless camomile.  It was a problem about 15 yrs ago in Haldimand, resulting in some research to look at best controls.  The data from that trial is included below, but the best control came from tank mixes that included glyphosate. 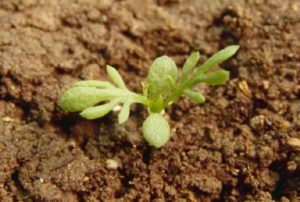 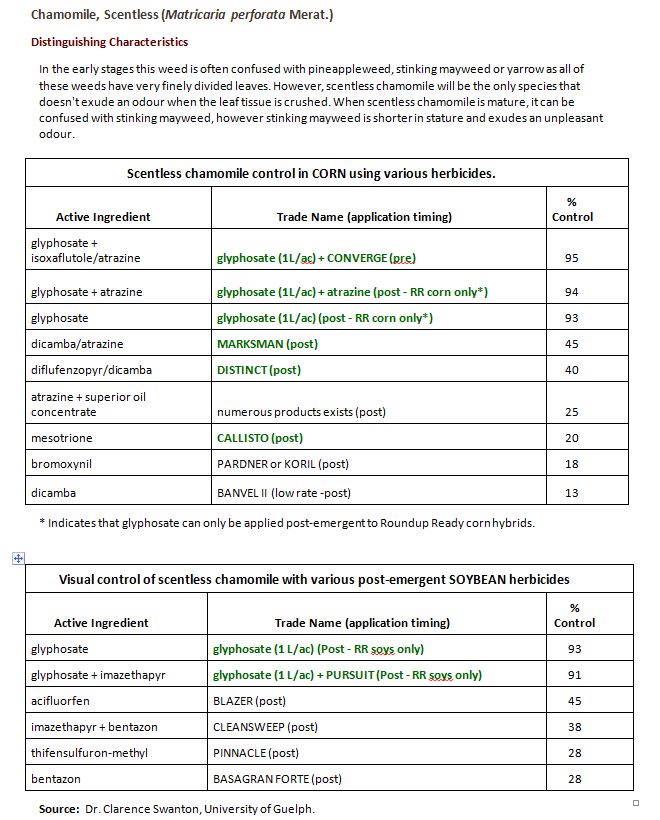 Special thank you and Happy Birthday to Brian W. who treated everyone to breakfast.