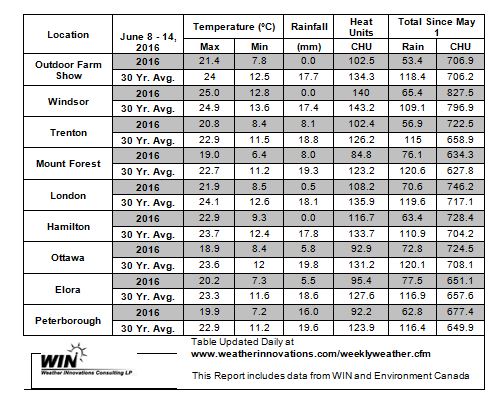 There is still a lot of field activity happening, but the real busy rush is starting to slow down. Accumulated heat units are shown in the table below.

Thanks Bill Brown and FS Partners for sponsoring breakfast. The June 14 meeting was the last of the year at Mt Forest, and we thank everyone for participating.

Most corn is at the 6 or 7 leaf stage and progressing nicely. Most corn fields are beyond the critical weed free period. They have been kept fairly clean with just a few re-sprays reported. Agricorp have had a few calls about populations of earlier planted corn to check if stands are adequate. Some cold periods experienced in the past few weeks may have knocked back the populations by a few thousand per acre in some areas. No one was aware of any replanted acres in the area. Later planted fields are looking good.

In recent years we have seen a lot of Northern Corn Leaf Blight (NCLB) in the area, and spraying fungicides in corn is fairly common. There are a few products registered for control of NCLB; consult the Field Crop Protection Guide (OMAFRA Pub 812), which is available online and in print (http://bit.ly/Pub812for16-17). Fungicides should be applied at tassling or as near to that as you can manage. Symptoms are sometimes seen when corn is shoulder height but typically appear right at or after tassling. The appearance of the disease all depends on storms bringing the pathogen in from the south.

The group mentioned that some corn plants are putting out tillers and feel this indicates “happy” plants with good fertility. As long as the tillers do not get too tall the plant can forfeit those tillers and draw nutrients back to the main stem and developing cob as needed.

Soil nitrate tests are showing variable, and in some cases low, nitrate levels. Cool weather and some lack of soil moisture may be the reason. OMAFRA Field Crop Team survey of soil N levels can be viewed at FieldCropNews.com and more details on the GFO sponsored Soil Nitrogen Sentinel Project findings can be found at http://bit.ly/GFO-N_Sentinel. Where sulphur was applied the soil test levels are okay, but fields that did not receive sulphur have very slow release.

Soybeans are currently at the unifoliate to first trifoliate stage. Damage reports have been coming in over the past week with more expected. In some areas of Collingwood, Meaford, Woodfield and through to Peel there are whole fields being replanted. There were also reports in Wellington county around Puslinch. The majority of concerns are reduced populations caused by seed corn maggot in both insecticide treated and untreated fields. Populations in many of these fields were around 50,000-70,000/ac compared to target populations of 150,000.

There are still a lot of weedy fields that are moving beyond the first trifoliate. Grassy weeds in particular are getting large. Where pre-emergence herbicides were put down and received some rain, the weed control looks much better. Most weedy fields are those that did not have good control through last year’s crop, or did not receive a spray in the fall. Recent windy days have made spraying  difficult.

Nearly all acres have received fungicide to prevent Fusarium head blight. While there has not been much rain, the foggy mornings are sufficient to keep moisture in the wheat canopy and provide conditions ideal for Fusarium. The wheat headed out a week to ten days earlier than typical so harvest should be about 5 weeks away. Observations of low head counts and small wheat heads are leading some to believe yields may not be quite as high as hoped. Dry weather has likely contributed to the smaller wheat heads.

First cut  hay is mostly done and producers are reporting higher yields than expected. According to the forage rainfall records from Agricorp, rainfall levels were  low in the first half of June. Second cut hay will need rain for success.

It is expected that there will be more summer seedings of alfalfa with the opportunity to use HarvXtra and have good control of weeds and volunteer wheat.

Planting is not yet finished but is getting close, as most producers finished last week. Some are still waiting on moisture before finishing planting. Earlier planted fields are at the first trifoliate but cool weather is not ideal for getting plants growing. There are also some replants happening because of poor emergence caused by crusting and plants emerging with bald heads (no cotyledons attached).

There has been some damage to edible beans caused by Group 15 herbicides. The first leaves were knocked off but new trifoliolates are coming and the plants should be fine in a week.

Early planted canola fields in the Mt Forest area are in flower, and others planted later have not yet bolted. Swede midge levels are at or nearing thresholds across Ontario; each field will be different so monitor them closely. There are also threshold levels of cabbage seedpod weevil in the Mt Forest area. Early planted fields should be scouted with a sweep net for this pest. Consult www.ontariocanolagrowers.ca for their notification on cabbage seedpod weevil that includes tips on scouting.

June 30th is the deadline for final acreage reports and at this time only 30% of acres have been reported. Call in or report your acres online by the due date. You do not want to be caught missing the deadline and miss access to the program for the year or lose any discounts you currently have access to.