We have all heard, or seen firsthand, the devastating effects of high populations of swede midge. Research continues on the pest, but at this time there are not many advancements to report that will provide big steps forward in swede midge control. Managing this pest requires investment in pheromone traps and possibly multiple insecticide treatments, as well as diligence in monitoring the traps and managing crop rotations.

In Western Canada, Dr. Julie Soroka is conducting swede midge research with colleagues in the Prairie Provinces. Soroka is technically retired from her position as Entomology Research Scientist at Agriculture and AgriFood Canada in Saskatoon, but continues to run field trials on swede midge and flea beetle as well as other topics in canola.

From 2013 to 2015 swede midge pheromone traps were set in the 4 western provinces, and scouting was conducted to look for larvae and crop damage. Some results are as follows: 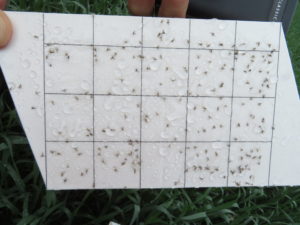 In the west, research to date shows there are only two generations of swede midge, compared to the four to five generations in Ontario. Fewer generations likely means there is a lower potential for populations to build to the high numbers seen in the New Liskeard area. There are, however, two emergence peaks similar to Ontario, with the first flush typically occurring in early July and the second later in the month. Soroka indicates that continued research is required to understand the later emergence seen in the west, and on what cues the midge to emerge.

Research continues on beneficial insects that will parasitize swede midge eggs. Two parasitic insects were reared from collections of swede midge eggs from Saskatchewan in 2014 and 2015. One such insect was an undescribed specie of wasp in the genus Gastrancistrus, and the other an undescribed specie in the genus Inostemma. These two groups of insects have members known to parasitize various midges. While this discovery is very encouraging, more research is needed before producers can take advantage of this natural control mechanism. Resources, including funding and personnel, will be needed to completely identify the insects and determine their host range, and what control they can truly provide. In addition, a beneficial insect could only be exploited in a system where insecticides are not required for other pests, such as flea beetle. Newer seed treatments used this spring in Ontario have shown good control of flea beetle and they would likely not impact a beneficial insect, so it is certainly heartening to imagine this scenario in the future.

Thanks to Julie Soroka for providing this information, and to her research colleagues Owen Olfert, Jennifer Otani and Lars Andreassen.