By: The OMAFRA Field Crop Team

Winter wheat harvest is winding down and yields have been above average in the majority of areas with good quality and very little Fusarium/DON reported.  The dry conditions did however, impact winter wheat yields in very sandy or sand gravel bottom fields. Stripe rust, especially in Essex/Chatham-Kent areas, did have an impact on yields in those fields planted with a susceptible variety and no foliar fungicides applied.  Spring wheat harvest is still a few weeks away. Once the wheat is off, growers should use this opportunity to manage weeds especially glyphosate resistant weeds such as Canada fleabane to avoid them going to seed.  One Canada fleabane plant can deposit 30 million or more seeds per acre.  Review your fertility program and replace nutrients which have been removed over the past three years as well as consider planting a cover crop such as oats.

The majority of the crop ranges from tasseling to silk browning and rainfall during this time is critical. In areas which have been severely dry, corn growth has been impacted significantly and growers are contemplating using the corn for feed or removing the crop.  Recent rains have helped but again growers are encouraged to continue to assess their fields in these regions.  If the crop is to be used for feed, monitor quality and nitrate levels.  For those fields which may be removed, is wheat an option? Yes, but remember Fusarium head blight risk always exists when planting wheat after corn.  Management practices are available to help reduce the risk.  Start by selecting a good FHB and disease tolerant variety which has a fungicide seed treatment.  Manage the corn residue by either chopping or incorporating into the soil as soon as possible.  Plan to use a FHB foliar fungicide next year.  There is an opportunity to plant wheat earlier in these affected areas but remember wheat planting date in Ontario begins second week of September.

Northern corn leaf blight symptoms can be observed in some fields although at lower levels.  Gray leaf spot, common rust and eyespot are present but again at very low levels.  Thrip injury on lower leaves is apparent in some areas which have had prolonged dry conditions.  Peak moth flight for western bean cutworm is occurring in southwestern Ontario and visit http://goo.gl/yDz9wn to view the interactive trapping map.  Download the pestmanager app (www.pestmanager.ca) to have access to management options for this and other insects, diseases and weeds.

Most of the soybeans are in the early pod stage (R3/R4) and as with corn, moisture is the critical factor between a thriving crop versus one which is struggling.  Growers are encouraged to scout fields with stand problems and determine plant populations. The minimum target as of August 1 is 90,000 soybean plants per acre.   Spider mites are being found in some areas such as Niagara so scout margins of the field for injury.  Soybean aphid populations are very low with some in the south-central Georgian Bay and Lake Simcoe area.  Levels are still primarily below threshold but regular scouting should be done from now until the R6 (full seed) stage of soybean to minimize any yield loss with this pest.  The action threshold is 250 aphids per plant, and with actively increasing populations on 80% of those plants.

The dry conditions have been favourable for soybean cyst nematode (SCN) infection.  Dig plants with a shovel and gently remove soil and examine roots for the presence of the small white to yellow cysts (Figure 1). Cysts are considerably smaller (1mm) compare to Rhizobium nodules (Figure 2). Sudden death syndrome (SDS) is becoming more noticeable as well over the past two weeks.  Symptoms are yellowing and browning with green veins (Figure 3).  Leaves will drop but the petioles will remain.  To confirm SDS, cut stems and look for brown discoloured areas along the stem (pith will remain white) (Figure 4). The hot dry conditions should reduce white mould risk. 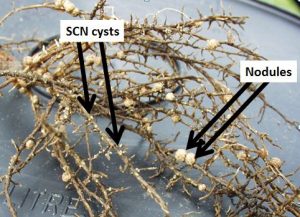 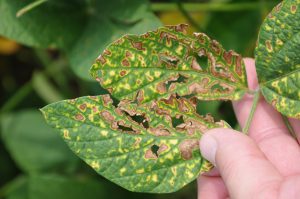 Figure 4:  Browning of the stem due to SDS infection.  Note the pith remains white.

Edible beans and Canola:  Most of the edible bean crop is in the pin stage and overall the crop looks good with some moisture stressed areas.  Disease and insect pest levels are low with limited root rot.  Canola crop has completed flowering although the heat did result in some flower and pod abortion.