The OMAFRA Field Crops team conducted its annual vomitoxin survey to assess the presence of corn ear mould and grain vomitoxin in the 2016 corn crop. Vomitoxins can be produced by Gibberella and Fusarium ear moulds and can be disruptive when fed to livestock, particularly hogs.

A total of 121 samples were collected from Southern to Eastern Ontario from September 23rd to 30th. In most cases, five consecutive ears were pulled from four random locations throughout a field. After recording pictures and rating ears for the presence of moulds and insect or bird feeding, samples were placed into driers as soon as possible after collection. Dry ears were shelled and mixed through a sample splitter, and delivered to SGS Agrifood Laboratories in Guelph for vomitoxin (DON) analysis.

Of the 121 samples collected:

Visual mould symptoms were much more prevalent in the 2016 survey than what has been observed in recent years. Similarly, vomitoxin analysis revealed DON concentrations that were higher than surveys from the past couple of harvest seasons, with the most recent year of comparable results being 2011 (Table 1). These results suggest extra vigilance in monitoring and managing DON concentrations in corn may be required in 2016. While some samples with elevated levels of DON were present across most regions sampled, in general there appeared to be a greater incidence of elevated DON levels for samples collected from Southwestern Ontario (Figure 1).

Table 1. Vomitoxin (DON) results from the past 6 OMAFRA vomitoxin surveys. 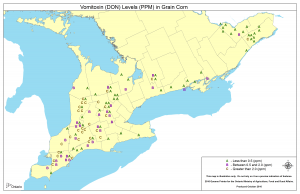 Feeding on ears by pests, particularly Western Bean Cutworm (WBC), incomplete pollination, and open ears  present an opportunity for greater mould infestation. While visual mould symptoms were generally more severe where ear feeding from WBC was present, mould symptoms and elevated vomitoxin levels were also observed on some ears and samples with little or no feeding injury. While WBC feeding may predispose risk, monitoring will be important in a higher risk year such as 2016 whether or not WBC feeding was present.

This survey does not fully capture all regions of the province, and results can vary locally from field to field depending on hybrid, planting date, insect feeding or fungicide practices. These results may not fully capture what is occurring in your fields, and therefore monitoring is recommended. If you suspect grain vomitoxins may be present, it is recommended to sample ears in a similar fashion as described above, hand shell, mix, and submit a grain sample as soon as possible after collection to one of the several labs in the province that test for vomitoxin.

When ear rot is present, the following harvest, storage and feeding precautions are advisable (Adapted from OMAFRA Pub 811, Agronomy Guide for Field Crops):

Appreciation is extended to the Grain Farmers of Ontario and SGS Agrifood Laboratories in Guelph for their support of this survey, and to the OMAFRA field crops team, industry participants and growers that assisted in the co-ordination and collection of samples.