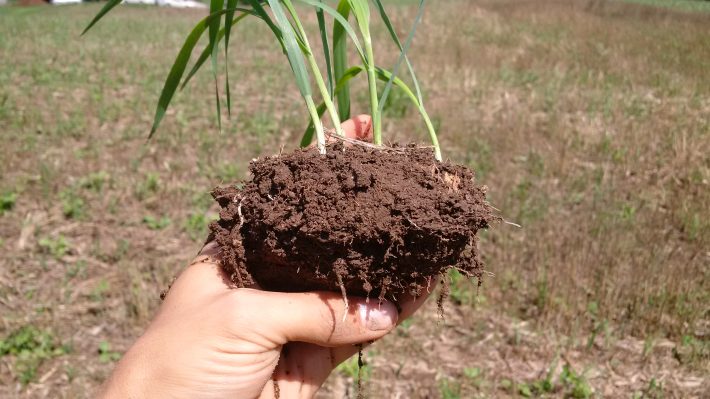 Soil organic matter (OM) is the single most important soil health property that you have influence over through your management. Soil OM is all living, dead or long dead (and decomposed) material. Higher soil organic matter translates into better water holding capacity, which was critical in a season like 2016. It helps to improve soil structure and nutrient cycling. A higher percent organic matter can also mean more consistent yields year-to-year. Simply put, it is the foundation of a healthy soil. Often, it is stated that nitrogen (N) fertilizer application helps to build soil organic matter by increasing total crop production. The logic follows that a higher yielding crop returns a greater amount of residue, which can then break down and contribute to soil OM. There have been a variety of scientific studies that have shown this to be true. However, nitrogen fertilization can also stimulate organic matter mineralization, which can lead to losses of OM and soil nitrogen. There is also research that shows no effect of N fertilization on soil organic matter over time.

Overall, it is safe to say that research findings on the effects of N fertilization on OM have been inconsistent in annual crop production systems. Because OM changes can only be detected over the long-term, it is difficult to determine the effect of N fertilization in different production systems with climates similar to Ontario’s. For example, what is the impact of crop rotation? What role does tillage play? And how are deeper soil layers affected by nitrogen fertilization? A recent study conducted at the Ridgetown Campus of University of Guelph by Drs. Katelyn Congreves, Laura Van Eerd and Dave Hooker used the long-term crop rotation and tillage system trial to answer these questions.

The research compared N rates across continuous corn, corn-soybean, and corn-soybean-winter wheat crop rotations under no-till and conventional tillage. Conventional tillage consisted of moldboard plowing in the fall followed by two to three passes with a field cultivator in the spring for corn and soybeans. Prior to wheat planting, two passes were made with either a tandem disc or cultivator. In the no-till treatment, there was zero tillage and only minimal soil disturbance at planting. As for N rates, starter-only rates were compared to starter plus moderate N fertilization to corn (89 lbs/ac N) and wheat (71 lbs/ac N) amongst crop rotation and tillage treatments. Samples were collected in 2006, 11 years after the establishment of treatments. What did they find?

So, after 11 years did nitrogen fertilization help increase soil organic matter at the Ridgetown site?

Well, it depended. The greatest increase in OM due to N fertilization occurred in the corn-soybean-winter wheat rotation in both tillage systems. Soil OM was increased by 18 to 28% in the top 8 inches in the plots that received nitrogen fertilizer. Under continuous corn, however, N fertilization did not change soil organic matter levels in either tillage system. In the corn-soybean rotation, N fertilization increased OM by 22% in the no-till system only; no change was observed with plowing.  Even down to a depth of 3 feet, the corn-soybean-winter wheat rotation showed the greatest increases in OM in response to N fertilization. Belowground biomass from a deep, fibrous-rooted wheat crop and growth during a typical fallow period may have contributed organic matter that is retained in the soil more easily compared to other crops.

Even more interestingly, corn yields from years 5-11 of the study revealed the benefit of an increase in OM. Year-to-year yield variability decreased as soil organic matter level increased. This meant more consistent corn yields regardless of the weather. Likely, this was due to soil OM benefits in terms of increased water infiltration and improved water holding capacity.

Nitrogen fertilization does not necessarily increase soil organic matter across all agricultural systems. Its effect depends on crop rotation and tillage system. For the clay loam soils of this study, there is clear evidence that inclusion of winter wheat in a corn-soybean rotation makes an increase in soil OM due to N fertilization more likely, regardless of tillage system.

We know that winter wheat in rotation benefits corn and soybean yields by 5 to 8%, reduces year-to-year yield variability in corn, improves soil health, and provides an excellent cover crop opportunity. Its value goes far beyond its net revenue at harvest. Now, this research suggests that wheat may also help make better use of N fertilizer from a soil organic matter perspective. Just another reason to add to the list.

In 2008, Dr. Hooker made improvements to the trial to better reflect current production systems. The no-till treatment was modified to strip tillage for corn and nitrogen rates were increased in both corn and wheat. Winter wheat plots were split to include both with and without red clover treatments. These changes provide an excellent opportunity to study the effects of these production systems on soil health into the future. 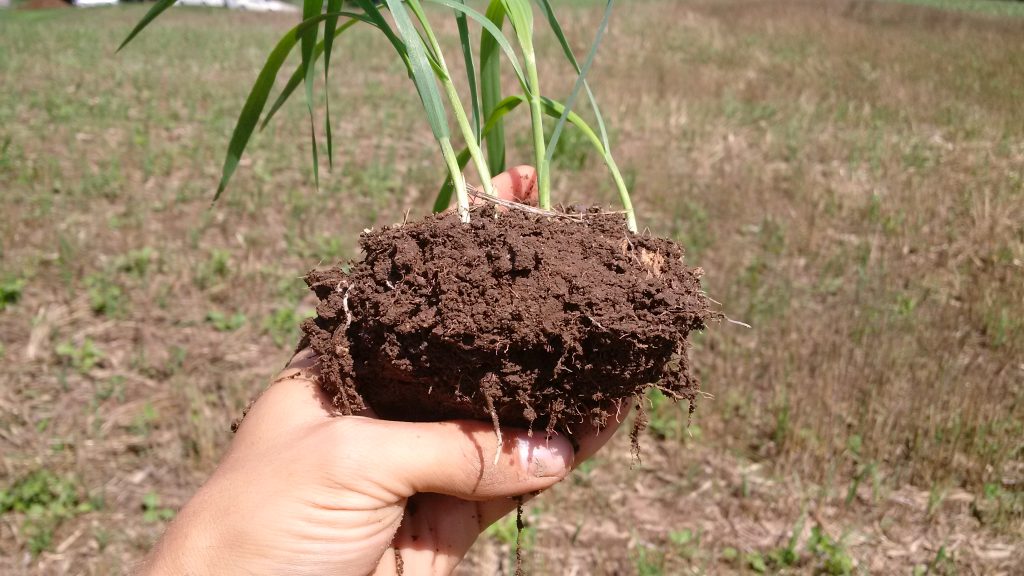