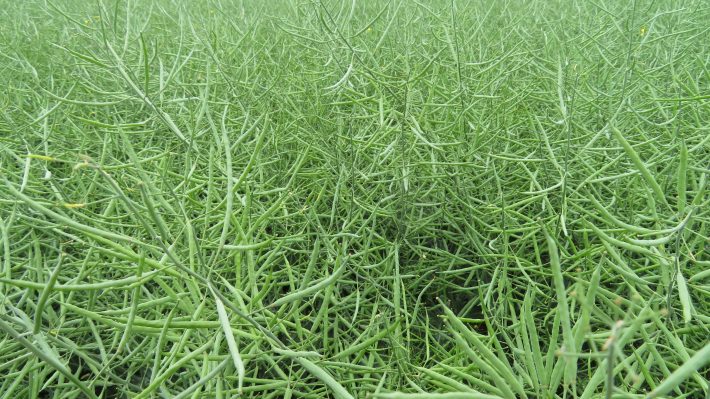 With a drier than normal spring throughout much of the province, canola growers were able to plant early. In the southern half of Ontario a majority of the acres were planted in the last week of April and first half of May. Rain in mid-May meant that some canola was planted towards the end of the month.  Spring conditions in northeastern Ontario were not much different than that further south, so planting was relatively early in Temiskaming and Nipissing as well. Further north, towards Cochrane, wet weather pushed planting back into June.

Early planted fields got off to a great start; they emerged within a week and moved quickly through early growth stages. There were pockets of frost in early May but it did not cause significant issues. Most herbicide was applied by the first week of June, and the majority of the crop was beyond 3 leaf stage by early June. Early planted fields began blooming in the second week of June. Dry weather and high day and night time temperatures during July and August caused some stress on canola plants, however, reports from farmers indicate the stress was not a significant issue in many areas. Central and eastern Ontario canola yields did suffer from dry, hot conditions.

There was a limited amount of spraying for flea beetle in 2016. Seed treatments were effective in protecting plants from feeding during early growth stages. The good planting conditions and warm spring allowed the crop to advance quickly through early growth stages, minimizing economic damage normally caused by flea beetles.

Fast, early growth is one of the best ways to avoid significant swede midge damage so the good spring conditions contributed to reduced swede midge damage. By the 1st of June, swede midge had been detected in Wellington, Renfrew and Grey counties and had reached threshold numbers in the New Liskeard area. Overall, fewer pheromone traps were set this year and data was not collected across the province, making it difficult to judge the actual state of swede midge populations. The need to spray across all counties was varied. Some had pressure that warranted spraying during vulnerable crop growth stages prior to bolting, and there were relatively high rates of success in controlling the pest. Much of the early planted crop was able to quickly grow past susceptible stages. Figure 1. A canola plant with swede midge damage that prevented growth of side branches.

Spraying for swede midge did occur in north eastern Ontario but not to the extent of years past. A number of fields were planted in areas where there was no recent history of canola, reducing the risk of swede midge damage. In the majority of fields where there was significant swede midge pressure the crop did bolt but side branching was impacted (Figure 1). Swede midge continues to be monitored on fields in north eastern Ontario where there were high populations in years past, in an attempt to determine when canola can be planted again (example in Figures 2 and 3). In early June, one field where canola had not been planted since 2013, approximately 500 male swede midges were captured in the first 24 hours after the trap was set. Growers recognize they have not entirely beaten the pest but have been able to manage it and keep damage levels low this season. Figure 3. Swede midge trap in Temiskaming on June 6. This field last had canola 3 years ago.

In the southern half of Ontario much of the crop bolted before there was significant swede midge pressure, so major economic damage was avoided. There were reports of swede midge at threshold in the Renfrew area during early growth stages, and those fields were sprayed. Many growers saw increasing trap counts during and after bolting and had to make a decision as to the value of spraying. Many acres through Bruce County, particularly those planted later, were sprayed once for swede midge and the fields had very limited damage in the end.

Cabbage seedpod weevil (CSW) (Figure 4) was identified at threshold levels in Bruce and Grey counties and some fields were sprayed. However, it is unclear as to whether the timing of the spray was at the appropriate crop growth stage. CSW will feed on flower buds to some extent, but the critical control period is when adults are present to lay eggs in newly forming pods (larvae feed inside the pods later on).  Spraying primarily occurred prior to 10-20% bloom, but likely could have been delayed until early pod formation and combined with foliar fungicides.  Fortunately, a new population of CSW did not move in during later flowering stages and notable CSW damage was not found. Because of the dry field conditions and lack of rain in the forecast, risk of white mould was very low during mid-bloom. Many farmers opted to skip the fungicide application, and white mould was not reported.

Somewhat surprisingly, there were no reports of brown or heated seed in this dry, warm season. Quality was good overall, and green seed was not reported. Crushers have indicated that oil content was higher than last year, but is not as high as the western crop. The harvested seed did not need to be dried; in fact some was as low as 6 to 7% moisture.

Canola yields across Ontario were good for the most part. Many have stated the crop was better than expected and that yields were consistent and strong. However, average yields reported by Agricorp indicate that in general, yields in southern and eastern Ontario were lower than last year, and yields in northern and north eastern Ontario were higher than last year. The average yield for the province, based on acres under production insurance, is 2,095 lb/ac compared to 2,341 lb/ac in 2015.

In Cochrane, Rainy River and Thunder Bay regions combined (2,411 ac), the average canola yield was 2,256 lb/ac. In Manitoulin, Sudbury and Temiskaming regions combined (3,594 ac), yields averaged 2,006 lb/ac which is higher than last year (approximately 1900 lb/ac). Yields in Nipissing were strong at an average of 2,719 lb/ac. Harvest generally wrapped up in these areas during the last week of September.

Average yields in Bruce (1,820 lb/ac), Grey (2,058 lb/ac) and Wellington (2,322 lb/ac) counties are lower than last year and canola acreage across these three counties was 8,572 ac compared to 7,775 ac in 2015. All other canola growing regions between Huron and York averaged around 2,200 lb/ac. The average yield across Kawartha Lakes, Northumberland, Peterborough and Prince Edward counties was just 1,289 lb/ac. From Lennox and Addington and Renfrew through to the easternmost counties, canola yields averaged 1,967 lb/ac. The majority of canola in the southern half of Ontario was harvested by the first week of September. 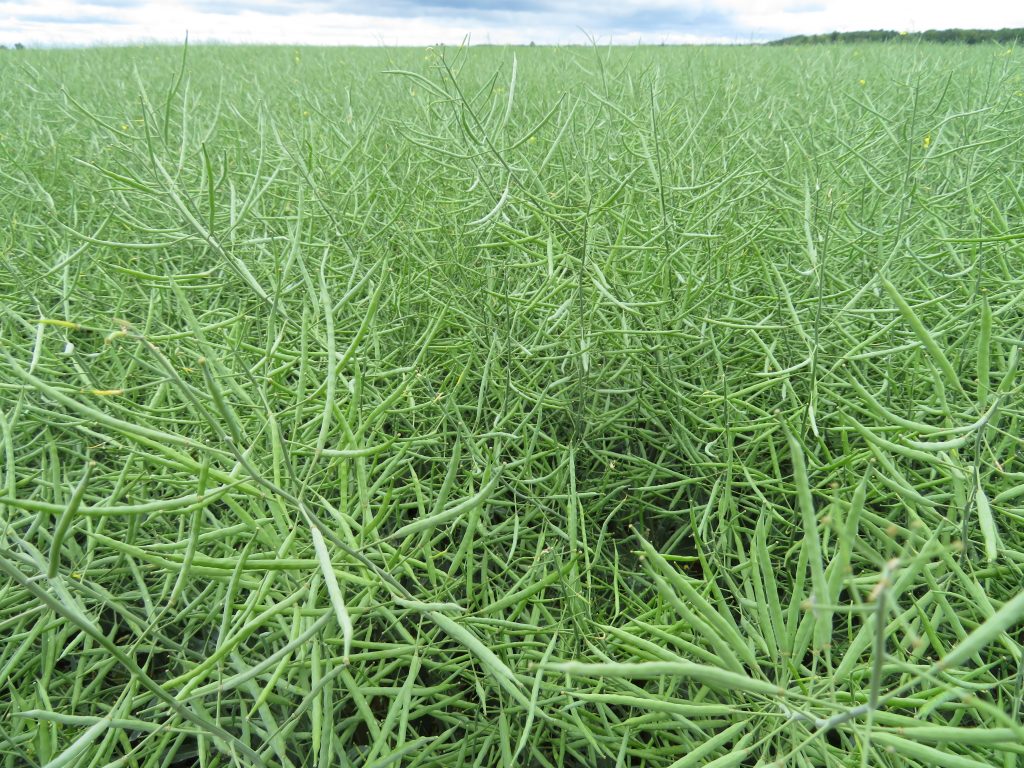