In 2016 clubroot (Plasmodiophora brassicae) was detected in fields across Ontario. The results of a preliminary survey for clubroot of canola in Ontario was posted previously on Field Crop News; to review it Click Here. This article provides  more information on the disease and how to manage it. You can learn a great deal more about clubroot and the experiences of Western Canada with the disease at www.clubroot.ca, developed by Canola Council of Canada (CCC). 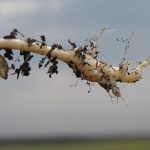 Clubroot is a disease that should be taken seriously and managed carefully, but should not prevent Ontario farmers from successfully growing canola. Now that we know the disease is here, the #1 task for all Ontario canola growers is this: look at canola roots in symptomatic areas of each field. Above ground symptoms are similar to other diseases or nutrient deficiencies and include yellowing, wilting, stunting, premature ripening and plant death. It will appear in patches, and often near the field entrance or in wet areas. Each year, in each canola field, pull up plants to check for galled roots in areas with these symptoms through the summer or as the crop begins to ripen. Some areas of your fields may always look poor because of soil conditions or other factors; check them for clubroot anyway. Clubs can also be found after harvest.

Life Cycle and Conditions for Infection

Clubroot is a very persistent and unusual soil-borne organism that requires Brassica plants for reproduction. Resting spores exist in upper soil layers for up to 20 years. They are stimulated to germinate and become zoospores when canola (or other Brassica species) roots release nutrients. The zoospores have flagella (whip-like tails) that allow them to swim towards roots. They move into root hairs, and a few days later secondary zoospores are released to the soil. These secondary zoospores can then infect the entire root surface, not just root hairs, and cause the symptoms that lead to yield loss.

As disease spreads through the root tissue a hormonal response causes excessive root growth, producing the clubbed or galled root symptoms that clearly identify the disease.  Clubbed roots cannot take up nutrients or water properly, which leads to aboveground symptoms and potentially plant death. As the roots decay, new resting spores are released to the soil.

The initial zoospore is able to easily swim towards roots when conditions are wet. If soils are dry the short-lived zoospore may not reach the roots, so in dry years there generally less clubroot infection. Soil pH below 6.5 can also slow spore germination and infection, but does not prevent disease development. If infection occurs early in the season, greater numbers of secondary zoospores are produced leading to greater yield losses. Light levels of infection may not cause yield loss but billions of resting spores can still be released from a single infected root.

The root hairs of both resistant and susceptible canola varieties are infected by the initial zoospore released from resting spores in the soil. However, secondary zoospores are not able to infect the roots of resistant varieties so the symptoms and yield loss do not occur.

There are different pathotypes of clubroot in Canadian soils, which are essentially different strains of the disease. A clubroot resistant canola variety will only protect against a specific pathotype. Clubroot-positive fields in Brassica vegetable production (cauliflower, broccoli, cabbage etc.) in Ontario were confirmed as having pathotype 6 in surveys from the 1970’s. In Alberta it has historically been pathotype 3 that caused economic damage in canola. Unfortunately at this time we do not know what pathotype has infected the canola in Ontario, but the lengthy analysis process is currently underway. (UPDATE May 12 – The first positive field in Verner has been identified as having Pathotype 2. Pathotyping work is ongoing for the other positive sites. )

Resistant varieties can lose their utility over time, and this has been the recent experience of canola growers in Alberta. Growing a variety that is resistant to one pathotype creates a selection pressure that allows proliferation of other pathotypes. For example, where varieties resistant to pathotype 3 have been used in clubroot-positive fields in Alberta, the canola is now being infected by pathotype 5x. If a field has moderate to high levels of clubroot spores, it is highly possible more than one pathotype is present.

Unfortunately, there are no pesticides available to control clubroot and it cannot be eradicated from a field. The key is to keep spore counts low, and long rotations (4 years or more) are the best way to achieve that. The half-life for clubroot resting spores is just under 4 years, so keeping Brassicas out of the rotation for 4 to 5 years prevents build-up.  In Alberta, depending which county you farm in a mandatory 4 year rotation may be imposed on fields where clubroot is detected. Renn Breitkreuz farms in Onoway, northwest of Edmonton, and was a guest at the Annual General Meeting of the Ontario Canola Growers Association in January. Based on his experiences and discussion with other farmers, Renn believes clubroot resistant varieties might be able to help once or twice but farmers cannot expect to use them as a silver bullet, and the only way to keep resistant varieties effective is through a 4 year rotation, at minimum.

Clubroot was detected in Renn’s fields 4 years ago, and he grew canola again for the first time in 2016. At the end of the season the county officials did not detect clubroot in those fields. Speaking to the pathotype-specific nature of resistant varieties and the breakdown of their utility, Renn states “It seems to me that it’s becoming harder and harder to find new forms of clubroot resistance. The hope that we will be able to develop resistance in the plant that lasts forever is not realistic, so crop rotation is definitely going to play a large part in clubroot management.” In Ontario we have the opportunity to grow many crops in rotation, and canola growers should ensure rotations are long to manage clubroot as well as other pests like swede midge. 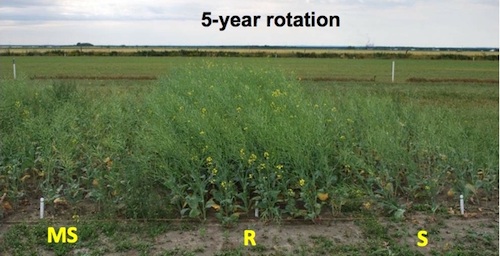 Photos from Gary Peng, AAFC. Clubroot resistant (R), moderately susceptible (MS) and susceptible (S) canola varieties were grown on clubroot infested soil in Quebec on rotations that ranged from continuous canola to canola every 5 years. Click the image to see more at www.canolawatch.org

Clubroot can be transferred in any way that soil moves from field to field, including through water movement, wind erosion and on farm equipment. The prospect of sanitizing field equipment is not one farmers or custom applicators happily welcome. It is a lot of work. But it is a key step in preventing or reducing the spread of the disease. Putting effort into sanitation will allow us to retain canola as a viable crop into the future.

Rough cleaning or scraping all loose soil off of equipment and tires between fields can take as little as 20 minutes and can remove 90% or more of clubroot spores present on the equipment.  Recall that a few spores can turn into billions of spores over the course of one season, so this level of sanitation is reasonably easy and effective. This is recommended for all growers in areas where clubroot has been detected, where equipment or custom operators are shared with those working clubroot-positive fields, or for farmers who feel they are at risk. Work infested fields last and try not to run equipment in fields with wet soils that will cake equipment and tires. Follow up with pressure washing and sanitizing with a 1% bleach solution when equipment is put away. Click Here for a guide on sanitation and knowing your risk of clubroot.

Thank you to the Canola Council of Canada, www.CanolaWatch.org and www.clubroot.ca  for resources on clubroot identification and management. Thank you to Renn Breitkreuz of Alberta, and Ontario Canola Growers Association for their assistance with this article.