A small group was in attendance, and much of the discussion was focused on wheat and dicamba-tolerant soybeans. Conditions have been wet in recent days with more rain to come, so the hope is that not too much nitrogen has been applied to wheat before the rain because it may have been lost. Producers are encouraged to be careful not to cause compaction and include this as a key point in deciding when to get out on fields.

Although early planted wheat had looked tough in past weeks, it is all starting to green up. Some are surprised at how good the wheat looks considering there have been many ups and downs in terms of temperature over the winter months. The small group did not report any signs of heaving in winter wheat fields.

Many have spread clover seed, and some nitrogen has also been applied in the region. That nitrogen may have been lost, particularly on sandy soils, because of recent rain. On the up side, what has been applied was done on dry soils so there seems to be minimal tracking in fields.

Producers and agronomists are encouraged to be out scouting winter wheat early for diseases. Powdery mildew has been found in some fields and should be monitored. Watch that it does not progress throughout the canopy, and protect the flag leaf or one leaf before flag leaf from powdery mildew.

Stripe rust is already present in fields in the southern United State and spores have been found in Wisconsin. Movement into Ontario is dependent on the weather. Get out and scout. Once stripe rust is detected, do not delay applying a fungicide. It will progress very quickly; there is only about 10 days between stripe rust infection and reproduction. Stripe rust caused yield losses in 2016, with reports ranging from 20 to 40 bushels lost where it was left untreated.

See below for a decision tree on fungicide applications in winter wheat, and Click Here for a list of fungicides registered for the various diseases. Consider using different modes of action for stripe rust than you would use for fusarium to mitigate risk of resistance. If you do spray for stripe rust this does not provide control of fusarium later in the season. You can also review this article (Click Here) on stripe rust and fusarium head blight. When scouting take note of the crop growth stage as well as the amount of disease, and know what wheat variety you are growing and the resistance traits it carries (some exhibit resistance to stripe rust, some are highly susceptible). 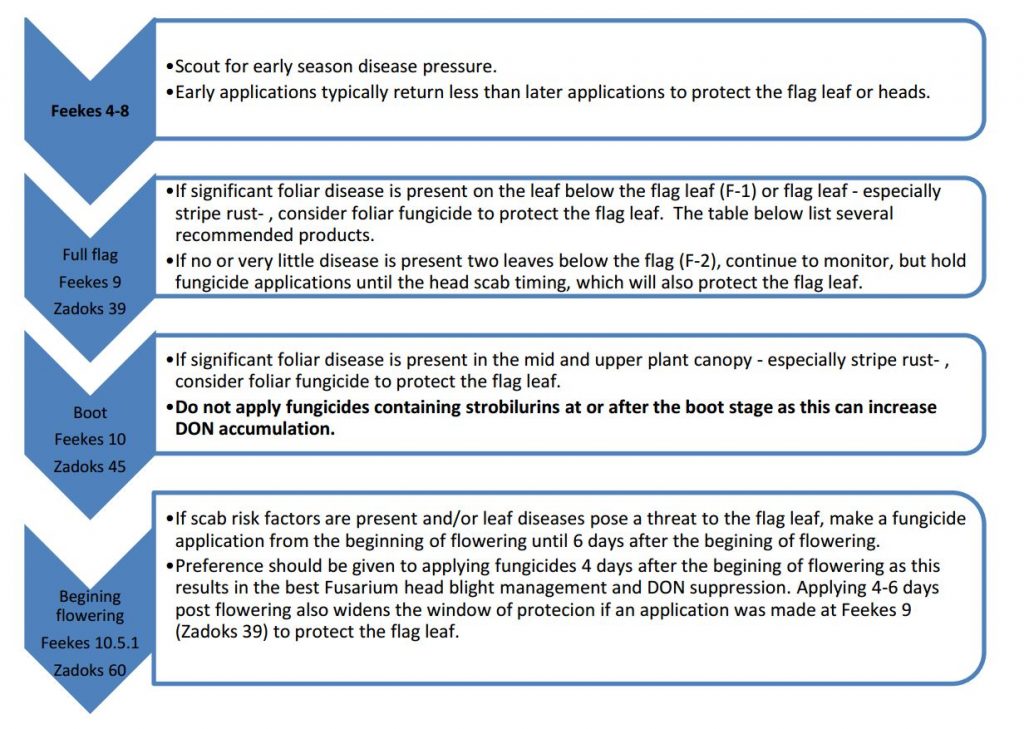 Agricorp have not had any damage reports on winter wheat in the region to date. As a reminder, May 1st is the deadline to enroll or change coverage for grain and oilseed acres, and to apply for unseeded acreage benefits.

Winter has been fairly open, and a great deal of rill and gulley erosion is visible in farm fields. Erosion and loss of soils has a direct impact on farm productivity.

Use of cover crops continues to be encouraged to keep soil in place. Cover cropping is likely tougher on extremely heavy soils. In those soils the cover is best controlled in the fall or else there can be too much moisture in the spring, making it difficult to get on fields in the spring. However, it was noted that creative solutions are required to move forward in managing soils, for example putting grass strips through large fields to slow water movement across the field.

Producers should also be focused on managing compaction and understand the associated economics. Scott Shearer, Ohio State University, gave a presentation in Ontario on compaction and has data that indicates there can be a 10-35 bu/ac difference in corn yields because of tracking, and up to 60% yield loss in very poor conditions. When up to 50% of the field may be tracked (as with some spring manure application operations), the losses are very significant and warrant consideration.

There were some brief conversations on weed control in general. Producers are reminded to get a burn down herbicide application done in a timely fashion. Bluegrass is a problem weed in the region and it was noted that pyroxasulfone (Group 15) is now available and has good activity on bluegrass, as well as waterhemp. Mike Cowbrough has produced a new book, Problem Weed Guide, which contains management strategies for 19 weed species in corn, soybean and cereal crops; it can be found here.

Stewardship of dicamba tolerant soybeans was discussed, and producers using this technology and spraying new formulations of dicamba are strongly encouraged to be informed and understand all details of the label to avoid issues with drift. Producers are encouraged to stick to early applications up to the first trifoliate. Do not spray in dead calm/zero wind or under conditions in which there may be a temperature inversion. Do not add AMS to the spray tank. Using air induction nozzles would be an off-label application of the product. Make sure you have the right nozzles (consider ordering a few extra) and overlap pattern and consider ordering a few extra.

In addition to following label instructions, consult these resources:

www.Engeniatankmix.com (US trade names and units)