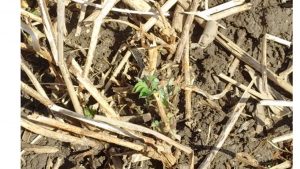 Alfalfa is just breaking dormancy. Roots seem intact, with some new growth just starting. The consensus is that winter survival is good in eastern Ontario, other than some of the poorly drained land where there was some heaving of the crowns 2 to 3 inches out of the ground. Further west, mainly along the lake broke dormancy last week and coming ahead nicely, less advanced further north. Grass stands doing well.

Low-lignin alfalfa; Quality Seeds reports that their variety “Boost” has about 9,000 acres to be planted in 2017. Boost was described as a non-gmo, that is shorter, leafy and branchy plant, with 7-10% less lignin than conventional varieties. Quality Seeds recommends the same harvest schedule as you would with conventional varieties, but the lower lignin gives a wider window for harvesting the 2nd and 3rd cut while keeping feed quality. These high-lignin varieties go into dormancy early.  Seed cost for Boost is $8/lb of seed, with Roundup Ready® varieties (such as HarvXtra®) are $12/lb, conventional varieties are $5-7/lb. Roundup Ready® varieties are better suited for fields that have lots of manure, high weed pressure and/or after a cereal crop that’s been harvested to control the volunteer cereal to reduce competition with the new alfalfa seedlings.

Very little fertilizer has been spread yet.

Priaxor ® fungicide is now registered on alfalfa for feed. Apply when it’s 6 to 8 inches tall. It may be difficult to get it applied before first cut, so will likely aim for 2nd cut. Maximum 2 applications per season. The pre harvest interval is 14 days. Registered for common leaf spot disease control and white mold suppression. Gives  better leaf retention resulting in better alfalfa quality for feed. Cost is same as corn or soybeans, at approximately $17/acre.

Some geese feeding again this spring; more snow geese around and they are worse for digging roots out (especially in alfalfa). Not late for nitrogen application yet. Some may be applied this weekend if it gets cold enough. Fields are starting to green up as fields beginning to dry up. Even in tough areas of the fields can find green tissue beginning to come through. Wheat in western Ontario is more advanced than in eastern Ontario. Agricorp reports only 1 winter wheat damage report so far and it was due to mechanical damage from ATV. Less growers are underseeding red clover in the winter wheat, but are instead waiting to seed a cover crop after harvest. This has resulted in better establishment and less problems if selling the straw.

The trend to reduced acres of oats and barley continues, particularly in areas of Renfrew county which are switching to early soybeans.

Intended acres are about the still the same as last year, although the market showing slight favour of heading in corn to soybeans. Most acres won’t change from what was planned. Seed supply is better on corn than soybeans.

More growers seeing the value to put fertilizer on both corn and bean crops this year. The high fertility fields held out better in last years drought than low testing fields

Identify Preserved soybean acres are down but not big indication on percentages of different type of soybeans due to reduce demand in Asia this year. Limited seed supplied is available of Roundup Ready 2 Xtend® soybeans. Demand in eastern Ontario is low and the acres are planted are not expected to be sprayed with dicamba. Reports of lower percent germination in this year’s soybean seed. Growers should check seed lot germination rate and adjust seeding rate accordingly.

Still lots of interest in cover crops in corn and it seems to work for people. Cedarlodge farms found the only yield drag last year was where they ‘planted green’ into a 3 foot high cereal rye cover crop. Cedarlodge farms uses only cereal rye as a cover crop. Target to broadcast seed in 1st to 2nd week of September into the corn when there is less competition from the corn and they don’t have to worry about herbicide residue. They target to seed about 75-80 pounds per acre. Cereal rye seed was selling for about $400/T but lots on the market now so will be down closer to $200/T.

Most growers have had their biggest success planting cover crops after cereal harvest. Big difference between broadcast and drilling in the cover crop. Most popular post-cereal harvest mixtures are red clover, annual rye, oats and tillage radish. Most growers do not want to spend more than $20/acre for cover crop seed.

Some have broadcast seeded cereal rye with a fall application of potash fertilizer into standing soybeans about a week before harvest. When soybeans come off the rye is off to good start, but hard to convince guys to run over (trampling losses) soybeans before harvest. Some growers have had good success by broadcasting cereal rye after soybeans have been harvested and then ran over with vertical tillage tool. The plan is to no-till (plant green) corn into it and spray off immediately after planting. If the cereal rye is sprayed first it’s like planting into straw rather than the planter cutting through the green cereal rye plant. People who have been using cereal rye for a while are beginning to see better water infiltration, and mellow soil in the spring making it easier to plant into. Soil is dryer under the rye than under corn stalks so need to watch planting timing so it doesn’t get too dry.

Not great on soybean side of thing as there is a great harvest in South America. Our basis not as high because of higher dollar, but we still have stronger commodity prices as compared to the US grower. Corn prices still good. Planting progress will have an influence as we move further into the planting season. Conventional corn acres small but are predicted to steadily grow over the next few years, depending on consumer demand.

Reminder that growers will need to have an inspection each year to buy seed (can’t do an inspection in April 2017 and buy your seed for 2018 in March 2018 on the same inspection).

Mike Cowbrough has produced a new book, Problem Weed Guide, which contains management strategies for 19 weed species in corn, soybean and cereal crops; it can be found here. Limited copies are available at the Kemptville OMAFRA office.

Thank you to Stephanie Nanne, P.T. Sullivan Agro and Jessica Singh for taking notes for this morning’s meeting.