Winter wheat is progressing well across the province. The winter wheat is mainly at early flag leaf (Zadok’s 37) to the swollen boot stage (Zadok’s 45-47), and some heading has been observed in

Essex County. Disease pressure across the province is currently low, and fungicide applications are expected to start in the next week. Cereal leaf beetle is present, but not of great concern at the moment. Most second applications of nitrogen has been made in split-application systems. Winter barley is now heading in the Niagara area.

Sulphur deficiency symptoms are visible in some winter wheat fields. Figure 1 shows sulphur deficiency. This appears as yellowing of younger leaves (in contrast to nitrogen deficiency, where older leaves yellow first). Crops have been responding to foliar sulphur applications, though response has been shown to be fairly variable depending on soil and seasonal conditions. Sulphur is released to the soil from the breakdown of organic matter, so soils with low organic matter levels or coarse texture are more likely to be deficient. Similarly, low microbial activity in cool wet soils can contribute to sulphur deficiency. 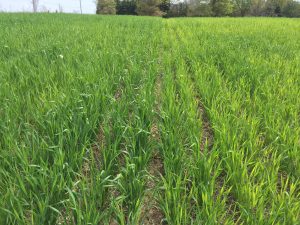 Spring cereals are coming up nicely, particularly where early planting was possible, with the exception of pockets where the water ponded from the earlier rain. Many of these areas are looking patchy, and particularly in fine-textured soils, crusting has been an issue.

With weather conditions this past week conducive to planting, it is estimated that 90-95% of intended corn acres have been planted across the province. The exception is found in the heavy clay soils of Niagara, where soils remain unfit and only 25% of corn has been planted. Less than a week remains for corn planting before yield potential dips below 90% for most of the province (see figures in Crop Report May 3rd, 2017).

Some early-planted corn is now at the 1-2 leaf stage on the sandier soils around Ridgetown. Elsewhere, early plantings have started to emerge.

Soybean planting is well underway, with over 30% of intended acres planted across the province. Soybean acreage might increase this year in areas where conditions continue to impede corn planting. As with spring cereals, some early-planted soybean crops are experiencing emergence issues due to soil crusting. A light pass with a rotary hoe or harrow might be necessary to break up the crust, though mild rains predicted on Thursday in much of the province may be enough to soften less severe crusting.

There is some concern about weed control. It is important for herbicide to be applied before soybean emergence for proper control, particularly of Canada fleabane.

Very few acres of edible beans have been planted due to wet conditions. Most fields won’t be fit for at least another week.

A little less than half of canola acres have been planted. In northeastern Ontario, recent frosts have continued to delay planting. Early planted fields are starting to emerge.

First cut has started here and there, but it is still too early to comment on yield trends.