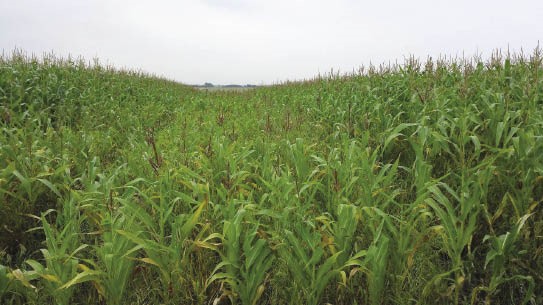 James Dyck May 30, 2017 4919 Comments Off on Soil Compaction: Stay Off the Field Until the Soil is Ready
Soil Health

It’s now the end of May, so the “perceived optimum” planting date for corn and soybeans has passed.  Optimum planting date assumes the soil is “fit” for seeding – if the soil is unfit, the optimum planting date lingers until soil conditions are suitable.  The extremely wet weather this spring has left soils saturated and delayed planting.  So we ask the question: Is it worth it to ram that crop into the ground if you’re doing damage to the field when you plant?  What’s a little compaction if it means the crop gets in the ground sooner?

Well think about it!

What is soil compaction?

Soil is made up of about 45% minerals, 25% air, 25% water and 5% organic matter.  When soil gets compacted, the soil particles get squished together and the air space is reduced.  Less air space means fewer pores in the soil and higher bulk density.

There are three types of compaction:

All of these are caused by what goes on at the soil surface, but some are much harder to get rid of.

The effects of soil compaction

Compaction, and the resulting reduction in soil air space / porosity, creates a whole host of problems in the field: 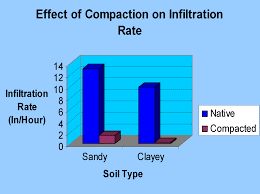 This is not a recipe for a healthy crop, and the results are obvious at harvest time.  In good growing conditions, compaction can reduce corn yield between 10-35 bushels per acre.  In poor conditions, yield loss can be up to 60%!

It may cost a few percent in potential yield if planting is delayed while waiting for soil conditions to improve.  But it takes a lot of yield benefit from an earlier planting date to make up for the potential losses caused by compaction! 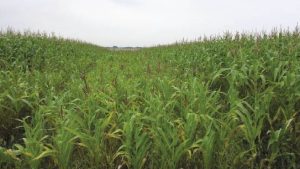 Stunted crop growth due to compaction (Fulton and Shearer, OSU)

The scale of compaction problems

75% to 80% of compaction occurs on the first pass through the field.  Driving on the field even once will create problems.  Driving a second time on the same track will create some additional compaction, but most of the damage has already been done.  So to reduce whole-field compaction, it’s better to drive in an existing track; this is the concept behind Controlled Traffic Farming (CTF).  In CTF systems, as little as 15% of the field is trafficked.

How does soil moisture affect compaction? 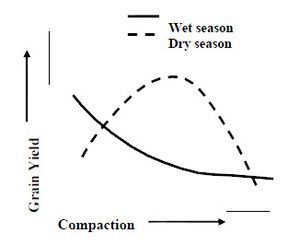 Compaction impact on yield in wet and dry years (Wolkowski and Lowry, 2008)

In good conditions, some compaction can actually be helpful – it promotes good seed-to-soil contact at planting.  When conditions are wet, it’s a different story.  Wet soils compact much faster and more easily than dry soils – any benefit of seed-to-soil contact is offset by the negative impacts of reduced infiltration, lower aeration, increased denitrification and higher potential for root diseases.

Wet soils also compact deeper than dry soils.  As the tractor tires sink into the ground, soil at the outside of the tire gets pushed away, and the ground contact area for the tire gets much larger.  That might sound like a good thing – BUT because soil has been pushed away, the contact pressure at the edge of the tire is much lower, and the contact pressure in the centre is much higher and more concentrated.  This drives compaction deeper in wet soils. 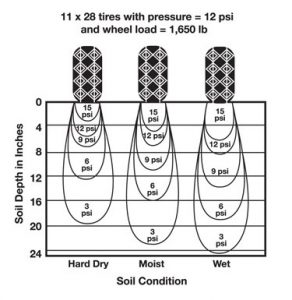 How do you know compaction is present?

Look for it!  Serious compaction is visible in ruts and tire tracks, stunted plant growth, nutrient deficiency, ponding water, etc.  It is visible up close and with overhead imagery.  With overhead imagery, especially NDVI growth images, it’s very obvious where the crop is struggling.  If the poor zones show a repeated and/or linear pattern, the cause is usually man-made.  Nature doesn’t often create straight lines. 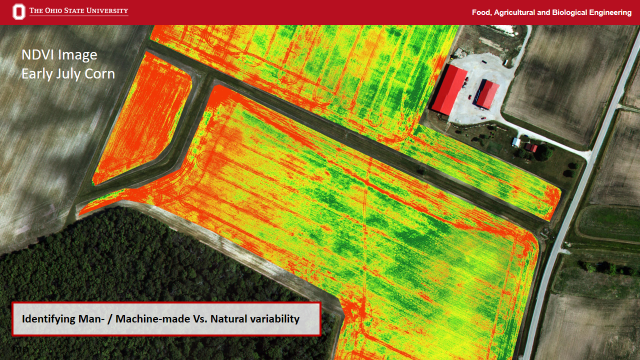 Tire tracks in this field are clearly visible from overhead NDVI imagery (Fulton and Shearer, OSU) 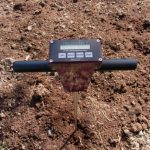 Dig for it! The plant roots will show evidence of compaction.  Normally, roots grow in all directions.  If roots grow in a flat plane, or stay shallow without much downward growth, there is serious compaction in the soil. 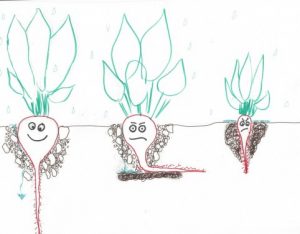 How much compaction is my equipment creating? 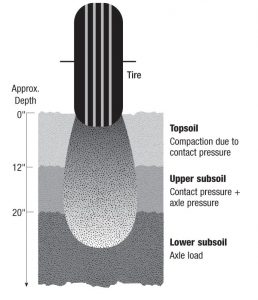 Comparison of tire footprint at high and low pressure (OMAFRA)

Tracks are more fuel-efficient than tires – but you can buy a lot of fuel for the added cost of tracks.  Tracks are typically better than row-crop tires because of the large surface area.  But tracks do not have a constant pressure – the rollers inside the tracks create point loads of higher pressure that are not evenly distributed.  So despite having a large track, compaction can still occur.  When using tracks, wider is better to reduce compaction.

Tire contact pressure is not the whole story.  Regardless of the number of tires, axle load will determine how deep the compaction goes.

What is the magic number?  Axle loads less than 10 tons (9 metric tonnes) will keep most compaction above 20 inches in depth.  Higher loads drive the compaction deeper into the subsoil.

10 tons may sound like a lot, but a lot of equipment exceeds 10 tons per axle when empty (let alone when fully loaded)

What about dual tires?  Will that reduce the axle load?

Dual tires are typically close together – so while the contact area is larger (with less contact pressure and lower surface compaction), deep in the soil the pressures from both tires combine and there isn’t much difference between duals or singles.

How can I get rid of compaction?

In short, you can’t.  Surface compaction may be able to be alleviated with some tillage (which can create its own compaction from the shearing effect!), but tillage will not remove deep compaction.  The winter freeze-thaw will help at the surface, but it won’t have any effect on compaction deeper that the top few inches.  Practices such as applying nutrients in such a way to make them more plant-available can reduce some of the effects of compaction, but won’t alleviate the compaction itself.

Subsoiling is not the answer either.  In some cases, research studies have actually shown yield decrease from subsoiling.  Subsoil machines typically need a lot of pulling power, so you’re creating more compaction when you’re pulling that machine through the field, not to mention the shearing compaction that occurs at the bottom of the teeth.

Is biology the answer?

Think of soil compaction like a slice of bread.  Take that bread and squish it flat.  Now try to fluff it back up again.  What tools can you use to fluff it back up?  A fork? A knife? A spoon?  No matter how much you chop, slice, or work the flattened bread, it will never quite return to its previously fluffy state.  It was biological activity (yeast) that made the bread fluffy in the first place.  Maybe it takes biological activity in the soil to really un-do the effects of compaction.

Biological activity in soils can be increased through practices like no-till or conservation tillage, organics application (manure, compost) and cover cropping.  This may provide an answer to mechanical compaction and will help to regenerate the soils – but it will take time. 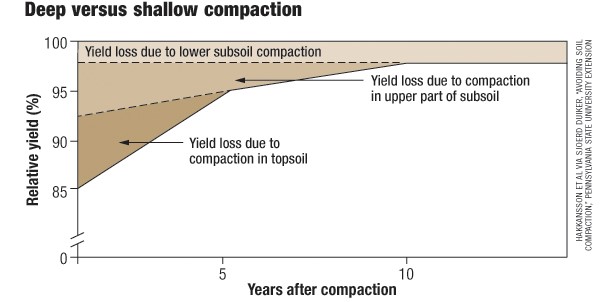