The rain over the weekend dropped 3-10 mm across the region. Some fields are now a bit too wet to work, but most farmers are able to spread fertilizer or spray.

From the 1st of May, we have now accumulated 220 crop heat units (CHU), about 50 below the 30-year average of 270 CHU. The 30-year average for cumulative rainfall to this point in the season is 55 mm, whereas 135 mm have been recorded in the Ottawa area.

No further stand losses were reported since the May 9th meeting. Agricorp has only received 5 damage reports, mostly on new forages seeded last year. Some concerns were noted about the lack of stored forages, with most predicting low first cut yields. This shortage of available forage is leading some to keep fields that would otherwise be replanted. Some new forage seeding stands have had areas that needed to be re-seeded.

Winter wheat is progressing well, with most in stem-elongation stage with flag leaves visible. Survival has been good, and less than 10% of acres will be switched to different crops.

Most second nitrogen applications have been performed, and many fields have already had herbicide applied. Those that haven’t will likely be sprayed this week or the next.

Spring cereals stands are looking good, with the exception of depressions in early-planted fields where water ponding caused heavy crusting and drowned seeds. These areas are mostly being selectively re-seeded, though the crusting has often required some tillage or rotary hoeing to allow seeders to penetrate.

Corn planting was estimated to be 30-80% completed, with less acres planted in the Brockville to Belleville area as there were fewer days with suitable conditions. Around the Ottawa area, most estimates were closer to 80% planted. Crusting has been a problem in early planted fields especially along the headlands and has required additional tillage or rotary hoeing. The recent gentle rains are helping to reduce the crusting and improve emergence.

About 10-15% of corn acreage has been switched to shorter season hybrids, with most 100-day hybrids having been returned. Not much switching to soybeans was reported, though some producers are modifying rotation plans to plant corn again in earlier-drying fields. Seed supply is good.

So far 15-20% of soybean acres have been planted, and some early plantings have already emerged. Large seed continues to be problematic, with at least one case of switching to smaller seed because of damage from planting equipment. Adjusting equipment is important for establishing proper populations. There is still seed available, but variety choices might be limited.

Acreage planned for IP soybeans is down and by as much as 50% in Grenville and Dundas Counties, reflecting lower market premiums, difficulties securing contracts, and residual frustrations from the previous season.

Old crop corn is strong at $200 per tonne, largely thanks to the continued weakness of the Canadian dollar. New crop corn is at $205 per tonne, but many producers are still hesitant to sell at this price.

The premium for non-GMO soybean is low at the moment at about $55 per tonne over Roundup-ready.

Flooding is still affecting some US states, but most are on par with average years. Contacts in Wisconsin have reported that the price of urea increased by $20, largely because high water levels in the Mississippi River have delayed shipping barges.

Pre-emergence herbicides have already been applied to corn acres. Later applications and weather conditions to this point have been conducive to herbicide efficacy, leading to predictions of less re-spraying compared to last year. Herbicide supply is not an issue. 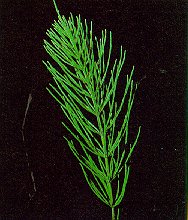 There was some discussion on horsetail, which is quite visible this season, especially in the margins of low-lying fields with fine-textured, acid soils. Horsetail is notoriously difficult to control, in part due to its deep and extensive root system including rhizomes. Though aesthetically problematic for some, horsetail is generally not competitive with healthy field crop stands. A comprehensive overview of the biology and control of field horsetail can be found here which is a chapter excerpt from the Problem Weed Guide for Ontario Crops . Additionally, the following control options are from the Guide to Weed Control, Publication 75:

The most effective herbicide treatment for field horsetail in recent University of Guelph research has been the combination of BROADSTIKE RC at 62.5 g/ha (25 g/ac) + MCPA Amine (500 g/L) at 1 L/ha (0.4 L/acre). However, this treatment MUST be applied before the 4 leaf stage of corn to minimize crop injury and yield loss. When this tank-mix combination has been applied to corn past the 4 leaf stage, significant crop injury occurs and has resulted in yield losses as great as 1.9 MT/ha (30 bu/acre), which was more than any yield loss associated with field horsetail competition.

Field horsetail is fairly tolerant to glyphosate. In glyphosate tolerant (“Roundup Ready”) corn the tank-mix of, glyphosate + BROADSTIKE RC at 62.5 g/ha (25 g/ac) + MCPA Amine (500 g/L) at 1 L/ha (0.4 L/acre). However, this treatment MUST be applied before the 4 leaf stage of corn to minimize crop injury and yield loss. When this tank-mix combination has been applied to corn past the 4 leaf stage, significant crop injury occurs and has resulted in yield losses as great as 1.9 MT/ha (30 bu/acre), which was more than any yield loss associated with field horsetail competition.

Glyphosate (360 g/L) at 2.5 L/ha (1 L/acre) + BROADSTRIKE RC at 87.5 g/ha (35 g/ac) applied preplant to soybeans has provided the best control of field horsetail. However, susceptibility of field horsetail to this treatment varies significantly by population.

Some problems have been noted with the fluency agent for neonicotinoid-treated seed gumming up planters. It is unclear whether this is a result of moister conditions or a change in product formulation.

More producers have signed up for crop insurance this year in both field crops and forages, likely due to the difficult season many had last year.

Thank you to Stephanie Nanne, P.T. Sullivan Agro for taking notes for this morning’s meeting.