Winter wheat growth stages are relatively normal at this point in the season; the crop may have looked a bit ahead in weeks past but conditions have been relatively cool. Wheat is in head throughout Southwestern Ontario and beginning to head in western/central Ontario.

Some winter wheat fields are looking yellow, even where nitrogen and sulphur have been applied. It is expected that in most cases there is still nitrogen available, but that wheat fields are under stress from sitting in wet conditions for an extended period of time. Leaching below the root zone can occur, especially on light soils, with significant precipitation. Transpiration by the wheat crop, however, has helped reduce downward water (and nitrate) movement. Significant nitrogen leaching is not expected to have occurred in most wheat fields.

Cereal leaf beetle is making an appearance in the winter wheat, with reports of insecticide applications in Waterloo, Bruce and Simcoe counties. Consult crop labels for pre-harvest intervals before applying insecticide. Spraying once the crop is heading is only recommended if there is significant feeding on the flag leaf.

Spring cereals emerged well, and continue to look good aside from patches of standing water.

Estimates on the amount of corn planted across the province have not changed a great deal in the past week, nor has growth stage of the emerged corn. On average, about 90-95% of intended corn acres are planted and many fields, particularly in southern regions are between 1 and 3 leaf. Farmers in areas with early planted corn may begin side dressing nitrogen soon if conditions permit. Planting progress is slower in some regions with heavier textured soils and frequent rains. Western parts of Haldimand county have about 50-60% of corn planted, but moving east through Niagara only about 25-30% of intended corn acres are planted. There are a few reports of corn replanting in central Ontario where soils were crusted or stands of early planted corn looked poor.

Black cutworm damage can be found in a number of locations. The larvae are more advanced than the crop and can cut plants off at the soil surface. Do not assume that insecticide seed treatment is providing protection. With the crop slow to emerge, the insecticide may no longer be at a dose effective enough to control the pest if it was planted three or more weeks ago. Once corn is in V5, the risk of injury has passed. Armyworm has also been reported in Ontario and neighbouring states. Corn planted into rye or other grass cover crops are at increased risk. Scouting is adviced in corn, cereals and mixed forages.

Some soybeans are beginning to emerge, and planting progress across the province is at around 40%. Niagara has less than 25% of intended soybean acres planted, and parts of Haldimand are at around 30%.

Early May is the ideal time to plant soybeans, but soybeans can adapt to a shorter season. A one month delay in planting results in only a 9 day delay at maturity. Farmers should continue with plans to plant soybean until the middle of June. Early June planted beans can yield 90% of those planted in May.

New seedings of alfalfa look good for the most part. Some alfalfa is a bit short, but is ready to be cut. Where farmers are able to get on the field between rains, alfalfa is being cut. Alfalfa weevil is present in some areas such as in Niagara and eastern Ontario. The pest requires spraying in some areas, particularly where the crop is not being cut. Most hay is reported as being of good quality.

About 80% on intended canola acres have been planted across canola-growing regions of Ontario. It is unlikely that many more acres will be planted because the late planted crop would flower during the hot summer weather, causing issues with abortion. Canola planted in the recent warmer weather is emerging quickly. Earlier planted fields are at cotyledon to 3rd leaf stages.

Flea beetle has been observed in emerged canola, particularly in eastern Ontario. Insecticide spraying is warranted if 25% or more of foliage is damaged. Swede midge has also been observed in a few areas, including Temiskaming and around Shelburne. Late planted canola is highly susceptible to swede midge damage. Farmers should be sure to put swede midge traps out before or right after canola has emerged, and monitored every 2-3 days. Insecticide can be mixed with herbicide if swede midge thresholds (20 adults trapped) are reached, and an additional pass with insecticide may be warranted if adults continue to be trapped (5 adults) after the initial application.

Research conducted in Ontario by Chris Gillard, University of Guelph Ridgetown, indicates that June 1st is the ideal planting date for dry edible beans if fields are fit. However, in some years yield of later planted beans (June 20) were just as good in the Ridgetown area. Pounding rain or prolonged wet conditions after planting can have a bigger impact on yield than planting date, and may lead to replant situations. Consider herbicide carry over and edible bean sensitivity before planting, particularly if planting on ground that had been intended for corn.

Adzuki beans mature late, so should be planted as soon as possible. Cranberry beans typically have the shortest days to maturity and can be moved to the end of the planting list. Late June planting may move harvest into late September or early October which can be wet, and has a risk of frost. 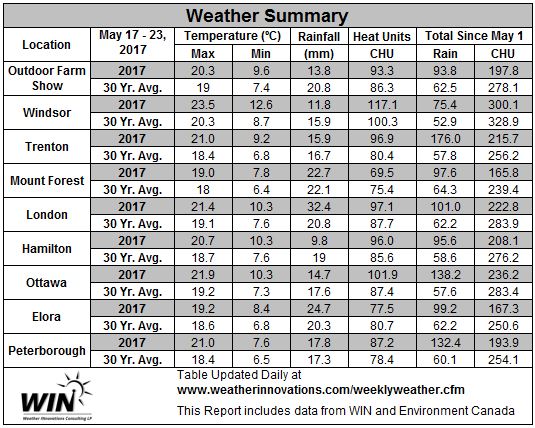