In Ontario, soybean seedling diseases and root rots are the second most important yield limiting diseases (Figure 1.) and this year is no different. Cool soil temperatures along with early rains in parts of Essex and Niagara resulted in a large number of soybean fields needing to be replanted and the significant rainfall recently has had a negative impact on soybeans in many areas.

Figure 1. Seedlings that die in patches or individually within a row are symptoms of seedling blight diseases.

Diagnosing these early season diseases in the field can be difficult since the symptoms of the various seedling blights and root rots are very similar. They can also be easily mistaken for other problems such as pre-emergence herbicide damage (group 14 PPO-inhibitors or group 5- photosynthetic inhibitors). Infected plants are often weak and less vigorous. This week we will discuss four common early soybean seedling diseases and their management.

Phytophthora root rot is caused by the oomycete Phytophthora sojae which has caused major losses in Ontario since the mid-50s. The fungus is prevalent in clay and clay loam soils with numerous pathotypes (formerly races) of the pathogen present in Ontario.  Soybeans are susceptible to Phytophthora at any stage of development and infected plants can occur alone or in patches often with a stem rot char­acterized by chocolate brown/purplish stem lesion which may extend up to the 3rd node on older plants. Phytophthora-infected plant roots and lower stems are soft (mushy) and water-soaked causing the plants to wilt and/or be stunted (Figure 2.). Dead plants are easily pulled since lateral roots are absent with a small (rotted) tap root and it is common for the leaves to become brown and shrivelled but do not fall off.

Phytophthora root rot occurs across many environments, but is most common in warm soils (>15°C /60°F) and wet conditions. 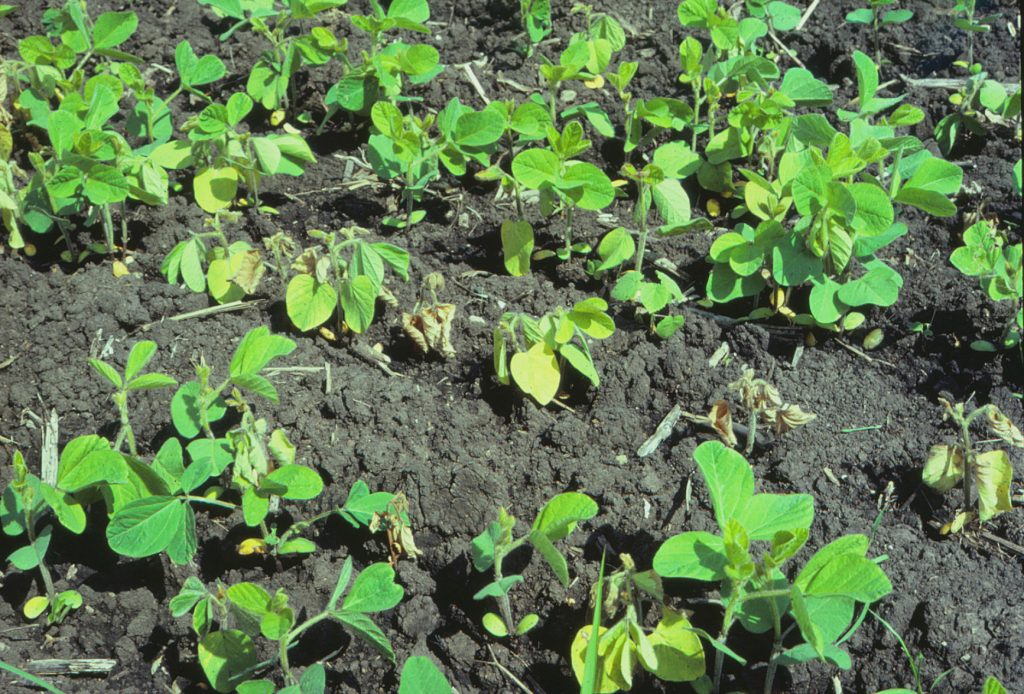 Rhizoctonia root rot is caused by the fungus Rhizoctonia solani. The characteristic symptom of the disease is a reddish-brown lesion which appears at the base of the seedling stem and on roots just below the soil line (Figure 3). They can enlarge into sunken, dry lesions which may girdle the stem resulting in stem breakage. 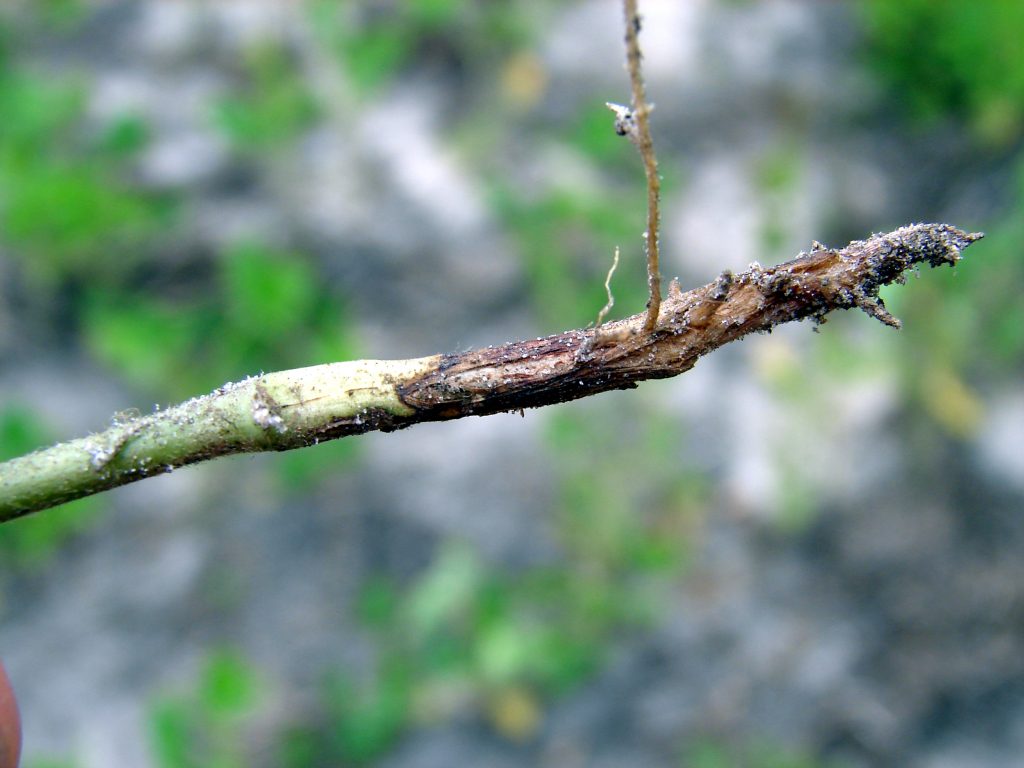 Fusarium root rot can be caused by many Fusarium species which reside in the soil and can infect soybean. Infected plants may be stunted and spindly, and roots may have brown or black discoloration (Figure 4). Affected plants may also have poorly developed root systems. Fusarium species can infect plants under a wide variety of environmental conditions and is often associated with stressed plants. 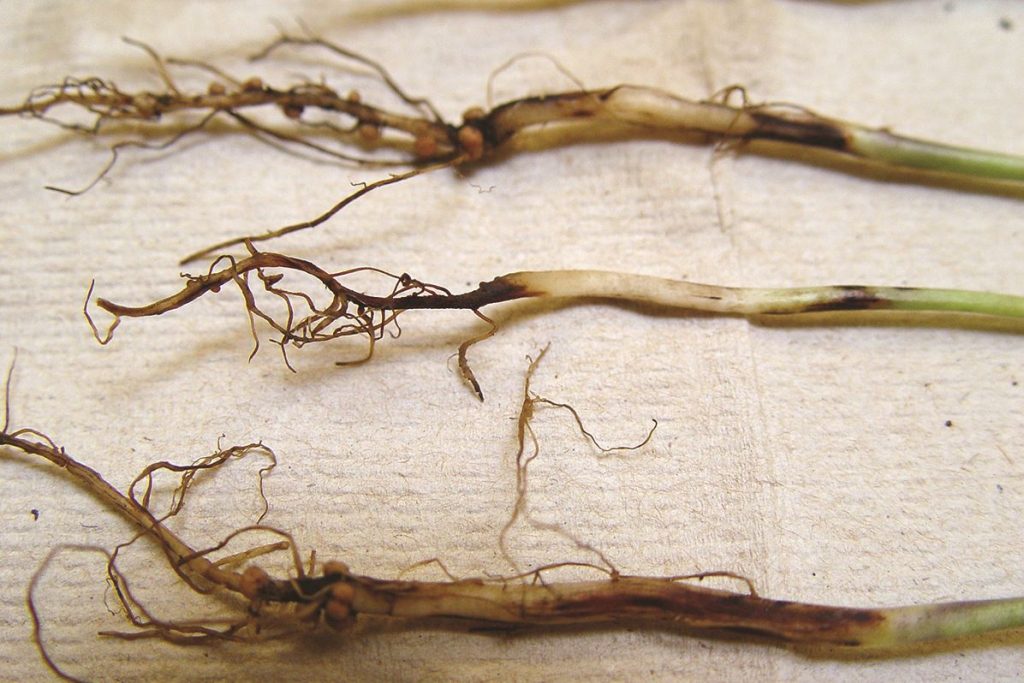 Pythium seedling blight is caused by many Pythium species which cause symptoms similar to Phytophthora sojae, which is also an oomycete. Pythium and Phytophthora sp are referred to as “water moulds” since the infective spores (zoospores) swim in the water film between soil particles until they find and infect the root tip of many crops. These zoospores are not produced until soils become very wet to flooded but standing water is not needed for zoospore production. Three to four hours of very wet “damp” conditions are enough to initiate zoospore production. Pythium seedling blight symptoms include rotten, mushy seeds or seedlings with poorly developed roots (Figure 5). 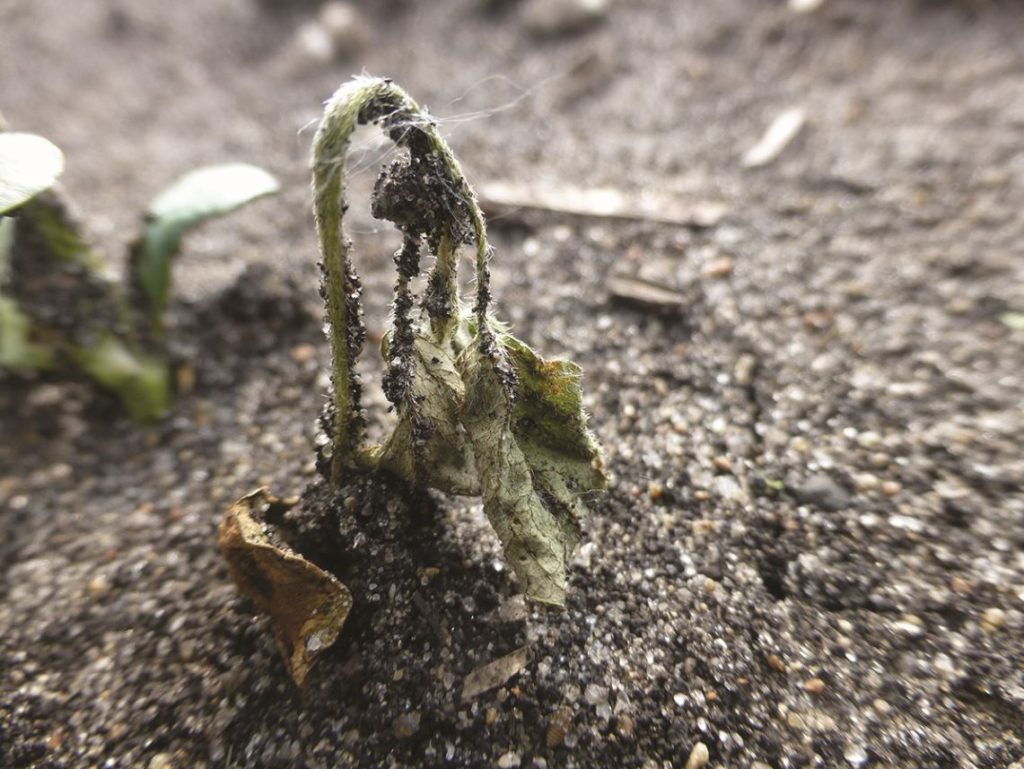 Figure 5. Pythium seedling blight may kill seedlings before or after emergence.

An on-going Graing Farmers of Ontario supported regional project with Midwest US colleagues has shown an increase in some species of Pythium which are more heat tolerant in Ontario and the US which unfortunately means the disease risk from Pythium is lasting longer into the season.

What can be done to manage these diseases?

The organisms that cause seedling diseases can survive in soil for a long time, and many are capable of infecting other agronomic crops such as alfalfa, corn, sugar beet, and wheat. Therefore, crop rotation may not effectively manage these diseases, and short rotations of crops between soybeans may allow seedling disease organisms to build to high levels in the soil. Resistant and tolerant varieties are available for Phytophthora root rot but no commercial varieties are resistant/tolerant to Pythium, Fusarium or Rhizoctonia.

Recent scientific research has shown that some cover crops can be hosts for many pathogens and nematodes. So careful, since cover crops may be a green bridge that can increase seedling pathogens such as Pythium and viruses. For these reasons, wait 10-14 days between cover crop termination and planting crop to decrease these populations and reduce disease risk.

Seedling diseases may be more prevalent in no-till or reduced tillage systems since these soils typically warm up slower in the spring and retain more moisture. In these systems, additional practices, such as improving field drainage or fungicide seed treatment, may be needed to manage seedling diseases.

Additionally, fungicides may be more or less effective depending on the pathogen species. For example, general Fusarium root rot fungicides are not effective against Fusarium virguiliforme which causes sudden death syndrome (SDS). For SDS, use a seed treatment containing fluopyram. Therefore, it is important to accurately diagnose the seedling blights present in a particular field and choose fungicide seed treatments accordingly.

For more information on seed treatments see OMAFRA publication 812, Field Crop Protection Guide (http://www.omafra.gov.on.ca/english/crops/pub812/p812toc.html). To learn more about these diseases and others, The Crop Protection Network (CPN) has developed a series of Soybean and Corn Disease Management publications to help growers in Ontario and the U.S. combat emerging disease problems in their fields. Go to (www.cropprotectionnetwork.org) or the Grain Farmers of Ontario website production resources section (www.gfo.ca) 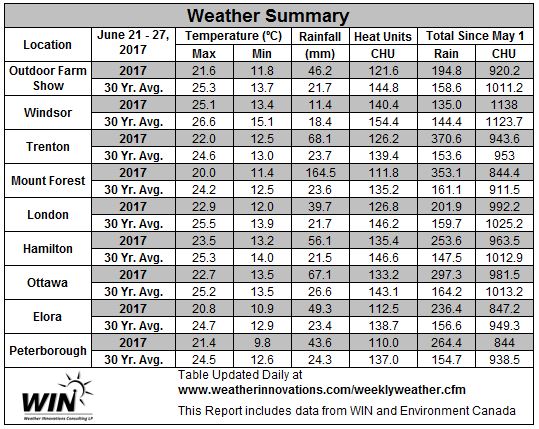