Thanks to Robert Maloney, for chairing the meeting and to Jack Legg (SGS Labs) for sponsoring breakfast.

The next meeting will be Tuesday, June 20th starting at 7:00am for breakfast and 7:30 for the meeting at the Malibu Restaurant.

Synopsis: Corn in most of the area has emerged with few replants reported to date. About 90% of soybeans have been seeded with the remainder expected to be planted later this week. A number of replants are underway particularly in areas that received heavy rainfall events shortly after planting. Soil prone to crusting is particularly hard hit this year. Many winter wheat fields have received a fungicide for Fusarium. A number of these fields also saw increased pressure from stripe rust just prior to the T3 fungicide application. Forage harvest has begun and yields in the area have been excellent to date. About 15% of the edible bean acreage has been planted. Planting is expected to resume later this week once fields are fit.

Corn: Corn planting in the area is now complete. Any fields that were allocated to corn will now be switched to soybeans unless it’s silage corn. If corn herbicides have been applied but corn was not planted, work with your herbicide provider to determine the best cropping management options. Overall the corn is progressing well with most of the crop at the 2-3 leaf growth stage. Minimal corn replants have been reported to date. There have been reports of black cutworm and slug feeding in a number of fields as a result of the delayed crop planting and cool, wet weather conditions. There have also been reports of corn turning purple or white as a result of weather stress. Fields with this symptomology will grow out of this relatively quickly.

Soybeans: Soybean planting is 90% completed in the region and about 80% across the province. The Niagara region is well behind. The crop ranges from VE (emergence) to unifoliate growth stage. There continues to be weed challenges in a number of fields that did not receive a pre-plant burndown. Canada fleabane is being found in heavy pressure in the Brussels and Mount Forest areas where it wasn’t controlled last fall. Cover crops have been found to be a good management strategy for controlling Canada fleabane. Some growers were not able to get down a herbicide early in the Extend soybean system and are considering drift reduction agents. These drift reduction agents will not replace proper nozzle selection. Retailers are encouraged to ensure growers have the right nozzles when purchasing dicamba products. If considering a drift reduction agent check with the company to determine the best management practices for these products. Also be aware of temperature inversions and tank-contamination as non-Extend soybeans are very sensitive to dicamba products. A coffee cup of a dicamba product in the tank is enough to cause herbicide injury symptomology. Temperature inversions start at night and peak in the early morning. Three things to look for in determining a temperature inversion are a clear sky, dew and calm wind.

There have been about 250 damage reports to Agricorp to date and replants are underway particularly in Lambton, Essex, Niagara and Haldimand counties where they received large amounts of rainfall and crusting became an issue. When doing plant population assessments a stand with 100,000 uniform plants per acre should not be considered for replanting. Research has shown that 100,000 plants per acre has a 98% yield potential on most soil types. On heavy clay soils 110,000-120,000 plants per acre are necessary for maximum yield potential.   Rolling fields after the soybeans have fully emerged compared to rolling immediately after seeding helps alleviate stand losses due to crusting. Rolling can be done up to the 1st trifoliate stage. There have been reports of seed corn maggot feeding in a number of regions due to the cool, wet weather. See picture below. Bean leaf beetles are present in Essex, and millipedes are widespread. 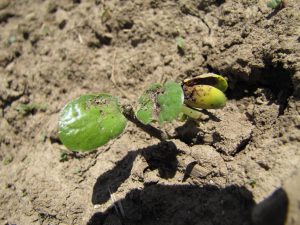 Wheat: Current weather conditions are ideal for fusarium head blight development in winter wheat. Many wheat fields in the area have received a fungicide to reduce FHB risk particularly if it is a FHB susceptible variety. A number of fields saw increased stripe rust pressure over the weekend. Growers with fields that were a few days away from a T3 application opted to wait and spray for both stripe rust and FHB at the T3 timing. Some fields received an early heading fungicide application if they were a week or more away from a T3 fungicide application and were growing a stripe rust susceptible variety to reduce the impact from stripe rust. Those fields will then receive a second fungicide application at pollination for protection against fusarium if needed. The group discussed the best timing for an FHB application and it was suggested that growers go by heading and stop looking at pollen. Once the winter wheat has headed it was suggested that a fungicide should then be applied 5 days after heading (give or take a day or two). There have been reports of leaf tip necrosis starting on the flag leaf and moving down in fields. This leaf tip necrosis is likely associated with a specific or group of disease resistant genes and is the plant’s response to the presence of disease such as stripe rust. The yield impact from this is minimal. Product has been going on in the Seaforth area for cereal leaf beetle control. Fields from Listowel to Walkerton continue to be monitored for cereal leaf beetle as well.

Forages: First-cut alfalfa has begun with excellent yields being reported to date. Growers who applied some early season N to forage stands are reporting significant yield boosts. Alfalfa weevil feeding has been reported in the Niagara and Glencoe regions. Potato leafhoppers have also been present in some areas.

Edible Beans: Due to the excessive moisture in many areas, edible bean planting is approximately 15% complete. Planting will resume later this week once conditions dry up.

Report Damage as soon as it occurs.