While still dealing with some impacts of wet and cooler conditions, almost all the crops are planted. Some areas may not get planted as persistent rains prevent that heavier ground from drying out. Consensus was that things looked way better than the previous meeting two weeks earlier. Beyond this region, there are actually areas that are in need of rain, ie south of 401 in the London area etc.

There is some concern among the group that the continued wet/cool weather is hiding a lot of “ills” from planting time that if the weather turns dry are going to become very visible. Not much that can be done, but it will be interesting to compare fields that were worked too wet, or too much prior to planting verses some of these planted notill into dead or green cover crops. A significant number of acres of these are scattered around the countryside despite the problems associated with this seeding method in last years dry conditions.

Wind, Wind, Wind. This has been a definite factor this spring. The days when the ground is fit seem to be the windiest too. A fair amount of spraying has occurred on days not suitable based on wind speed.

Some areas have continued to be too wet to “turn a wheel” and those producers and their suppliers/advisors are getting frustrated. There will be “unseeded acre” claims this year but still not sure of how much acreage will be impacted.

While hindsight is 20/20 forage excessive rainfall benefit would have paid this year for forages. This is something to keep in mind for the future.

The wheat crop is a bright light this season. Everyone seems pleased. Despite the threat from the weather, all seems to be managing along well. There continues to be some Stripe Rust concerns, especially where a T1 or 2 application was not made. Further information on managing Stripe Rust and Fusarium Head blight (FHB) are available at:

Continued emergence of new stripe rust infected fields is having the recommendation lean to the importance of a second application.

Much of the crop has received a fungicide application for preventing FHB. People had some difficulty getting timely applications made because of both the weather and the presence of two distinct “crops” across the province based on the two significant timelines of planting last fall. Within the planting windows the uniformity of head emergence appeared to be good but just had to watch those two timings for optimizing application. Congratulations as people seem to be finally getting the point that nozzle selection for head coverage are not the same as for foliar treatments. The right decisions are being made, which increases the efficacy of the products greatly and the value for dollars spent.

Some reports of cereal leaf beetle in Perth County. There hasn’t been any  armyworm reported yet, but with the hay harvest happening, they may be on the move so should be watched for.

Most if not all of the crop is in. Stands are good considering the weather. While stand populations tend to be on the lower side of the intended, they seem to be rather uniform and no one is talking about ripping them up and starting again. Stand issues are a function of weather and some compromised seed vigor based on the conditions under which last years seed developed and the large size of seed that may not have planted as expected if growers didn’t calibrate their equipment. Populations are averaging about 120,000. Some fields are spotty, but they are the minority. Agricorp has had some reseeding because of crusting or seed corn maggot. Hot spots are New Dundee, Moorefield, Teviotdale. In some cases there is enough pressure that the seed treatments are struggling to keep up with the infestation. Since bugs have to take a bite of the roots to get a lethal does of insecticide, a very high insect population means the plants can be injured do to this single feeding event by each grub. Some significant insect issues across soybean fields. This has led to some replants, where it has been hard to source seed.

Some fields didn’t get burndown and pre treatments. Where glyphosate resistant fleabane is present this could be problematic, especially in IP beans. At the previous meeting there was the recommendation that fields known to have resistant fleabane and not covered with an appropriate pre emergence weed control program should be reseeded and sprayed correctly. With the season the way it has been people did not want to do that. Talk was that there is considerably more resistant fleabane in the area this year than last. Some has been tested and is showing both glyphosate and group 2 resistance.  This may lead to some significant weed issues over the remainder of the season.  Going to a post emergence program relying on Cleansweep, people are going to have to stay on top of the weed stages. The timing is critical for achieving control and the earlier the better. The usual recommendation is 21-28 days after application and the window should likely be on the earlier end of that.

Later planting may push harvest back which is concerning those that are planning wheat for this fall. Planting date is critical, but like we found this spring, soil conditions at planting are the key to high yield potential.

On the corn front, the three main issues coming along are western bean cutworm, fungicides and N application where planting proceeded intended worked in N fertilizer.  The numbers for PSNT on nitrogen are lower than normal, but not really lower than expected given the cool wet conditions.  Tables 1 and 2 compare 2017 and 2016 numbers from the GFO Soil N Sentinel Project. 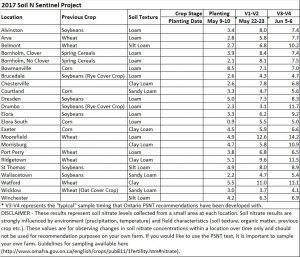 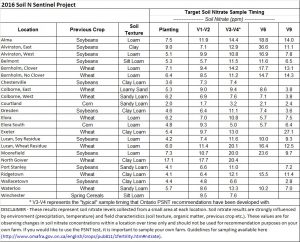 Vomitoxin (VOM)  was a big issue last fall in terms of worry and there were some hotspots so people are concerned again, or at least talking like they are. There is some indication that feeding from western bean cutworm leads to a greater potential for VOM. This may lead to growers electing for a fungicide/insecticide combination coming up shortly. Further management info on this pest at:

Tracking of western bean cutworm can be followed at:

Some incidence of seed corn maggot and grubs have lead to some replants but still rather low. Slugs have been quite obvious with all the seeding into fields with lots of live or dead crop residue, but despite the weather the corn is for the most part keeping ahead of them.

While weed control is generally good, some fields are experiencing some weed break throughs on pre programs. Be watchful of these fields and be prepared to act. Keep in mind that weeds that emerge after the crop are much less likely to cause yield impacts. However, this is a function of the species, density and weather conditions that follow.

Good stands with earlier planting date under good soil conditions were to the 6-8 leaf stage and moving quickly.

A great deal of hay came off quickly. Indication is good quality and okay yields, especially considering what people were expecting. Alfalfa weevil  populations continue to be a problem in some regions. Scouting is important. Infestations might reach threshold before the next cutting date.

A large portion of the crop got planted over the weekend of June 10-11. For the most part the field conditions were in good shape for planting.

A good resource for scouting and management of western bean cutworm in edible beans is available at: