Planting canola early is the best way to beat swede midge. Canola was planted late across much of the province this spring, so the risk for damage by swede midge is very high. This year swede midge are present long before bolting, and in some regions even before planting was complete.

It is important to monitor canola fields using Jackson traps with swede midge pheromone lures. Swede midge begin to emerge in mid-May to early June. That means that this spring, in most cases, traps should have been set up at the time of canola emergence. Canola is susceptible to swede midge from the 1 leaf stage until bloom. Swede midge numbers can escalate quickly so traps should be monitored every 2 to 3 days. Ideally, 3 to 4 traps should be used in each field.

Refer to the infosheet (Click Here) for details on where to purchase traps and how to set them up, as well as information on the swede midge life cycle and management strategies.

Once seedlings have one true leaf, begin counting the number of midges captured in each trap and add them together. 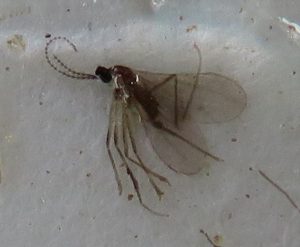 When a total of 20 adults have been captured from the start of trapping, the first insecticide application is required. Subsequent insecticide treatments may be necessary if an average of 5 adults per trap per day are caught and the canola is still in pre-flowering stages. To determine this, count the total number of midges captured per trap and divide by the number of traps and the number of days since you last counted. Make the insecticide application as soon as possible once the threshold has been reached. Do not use damage symptoms to time spray applications.

Note that Coragen cannot be applied to fields within 60 days of planting if Lumiderm or Fortenza seed treatment was used. For optimum efficacy, Matador should be applied in the evening or early morning before temperatures rise. The currently registered products are not likely to provide 100% control.

Swede midge reached threshold on some fields in the northern areas of Thornloe, Earlton, Kerns, Brethour, and New Liskeard prior to June 1st. However, other fields in those regions have had empty traps to date. The decision to apply an insecticide should be based on field-specific trap counts.

Reports of canola fields above threshold have also come from the Palmerston and Ayton areas, and in Renfrew county during the first week of June. Traps counts are escalating in areas of Grey county, and around Shelburne. These reports come from canola fields that are near where canola had been planted last year, as well as areas at a greater distance from any recent canola. All fields should be monitored with traps.