Leaf yellowing and slow growth is evident in many fields. Stressful growing conditions will amplify nutrient deficiency symptoms, insect feeding, and disease symptoms. When plants are already stressed it’s even more important to manage deficiencies wherever possible. Fortunately, weather conditions over the next four to six weeks are more crucial to seed development than the first half of the growing season. Conditions from now on will play a bigger role in final yield than May or June.

K deficient leaves turn yellow along the leaf margins and may cup downward (Figure 1.). Lower leaves are affected first. Factors that limit root growth such as dry conditions and sidewall compaction will reduce K uptake. Under dry conditions roots are less able to take up K from the soil even if soil K levels are sufficient. Water logged soils will also inhibit uptake. A soil test is the only reliable way to know if a field is truly low in K or only showing stress-induced potassium deficiencies. It’s also important to note that K deficiency symptoms may indicate soybean cyst nematode (SCN) feeding on the roots. When taking soil samples ask the lab to also test for SCN. It’s difficult to alleviate K deficiency now since foliar products cannot supply enough potassium through the leaf to rectify the problem. A dry application of potash may still be warranted in severe cases. Yield response will depend on the amount of rainfall after application. Generally, fertilizing low testing fields can result in a yield increase of 3 to 5 bu/ac. 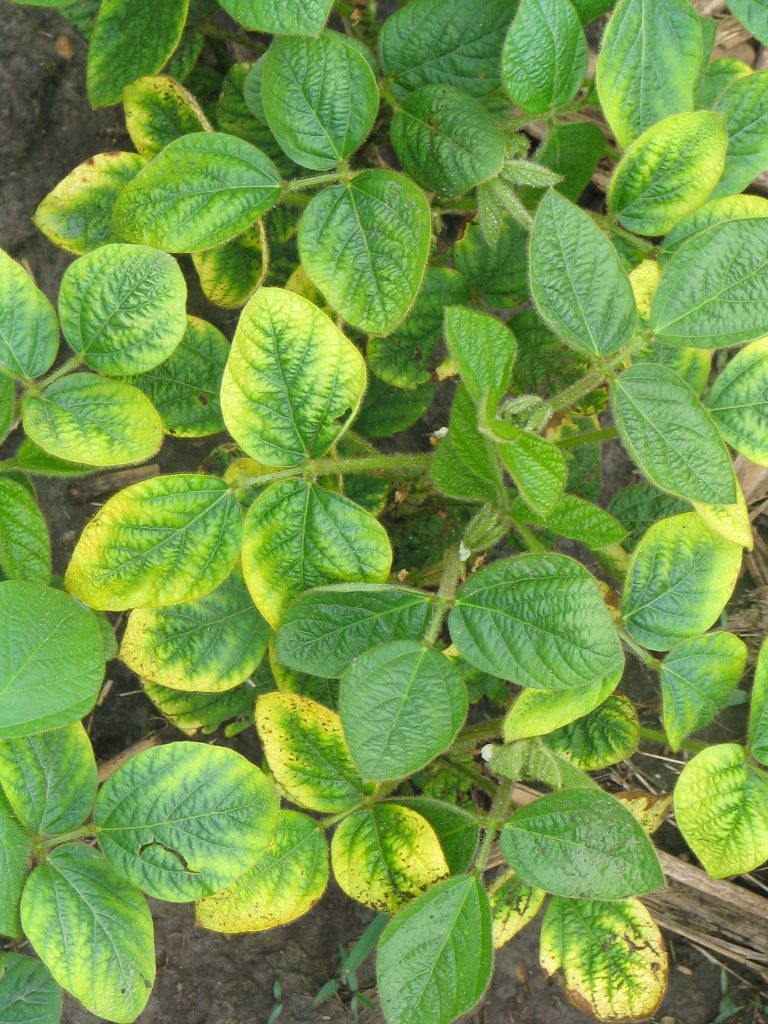 Symptoms of Mn deficiency are interveinal chlorosis (yellowing) (Figure .2). Mn is immobile in the plant so symptoms will generally appear on the younger leaves first. One of the most significant factors affecting the availability of Mn is soil pH. As soil pH increases, Mn availability decreases. Deficiencies can also appear on eroded knolls where the pH is higher than the rest of the field. The deficiency is most common on poorly-drained soils, especially clays and silt loams. High organic matter also ties up Mn. Manganese is less soluble in well-aerated soils. This is why compacted areas (wheel tracks) are dark green while the rest of the field goes yellow. A foliar application of Mn works well to rectify the deficiency and can provide a 5 bu/ac yield response in severe cases. 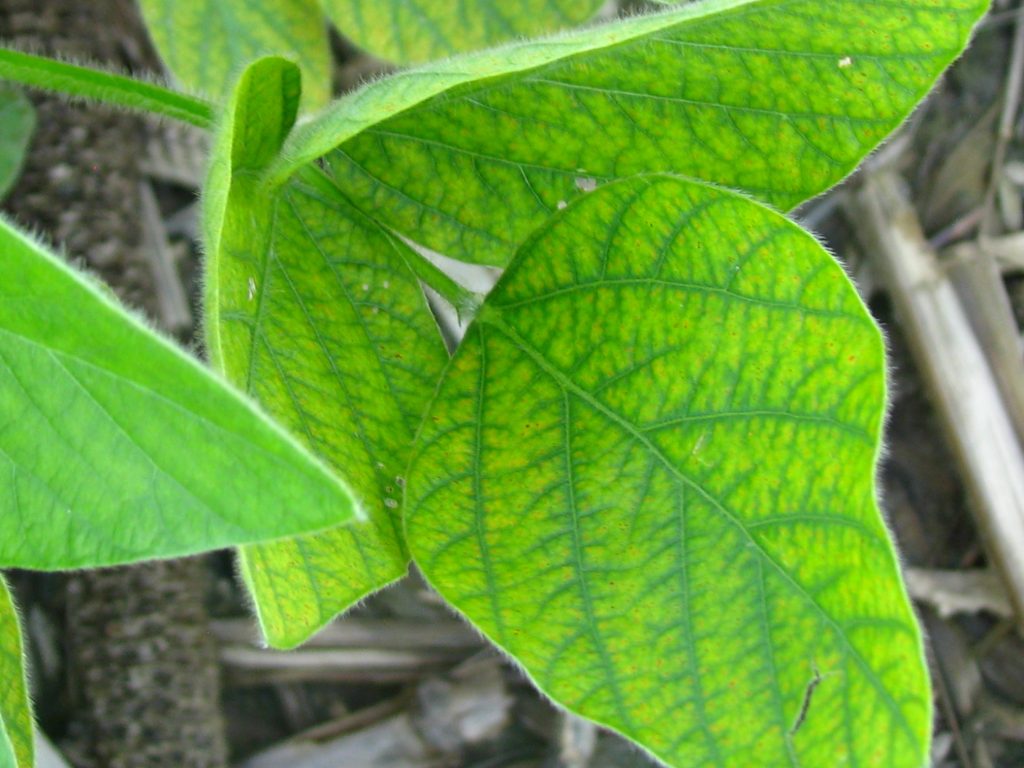 Nitrogen deficiency in soybeans is usually evident early in the season before N fixation can occur. Soybeans naturally go through a period when leaves turn light green or even pale yellow. This is the period just before the nodules start to supply adequate nitrogen. Once the nodules have established and start providing enough nitrogen, the leaves will turn a dark green colour. If no nodules are present because it’s a first time soybean field and there has been a nodulation failure, an application of urea is warranted.

Recent trials have demonstrated surprising yield responses to P in soybeans. Traditional thinking was that soybeans do not show a significant yield response to P fertilizer unless soil test values are very low. Visual P deficiency symptoms are rare and difficult to identify even when present. The plants are slow to grow, spindly, and the leaves remain smaller and lighter in colour. However, these symptoms are subtle and usually overlooked. Soil compaction limiting root growth will cause weather induced deficiency. Ontario trials conducted over the last 5 years have shown that when soil tests are less than 20 ppm for P (Olsen) and less than 120 ppm for K, the application of potash by itself only raised yields by 1 bu/ac. When both P and K were applied yields increased by 4 bu/ac. When P soil test levels were less than 20 ppm but soil test levels for K were greater than 120 ppm, the application of P increased yields by 3 bu/ac across in this study. This is strong evidence that phosphorus is a critical component to high yielding soybeans. If soil tests are adequate for either P or K additional fertilizer does not increase yields. 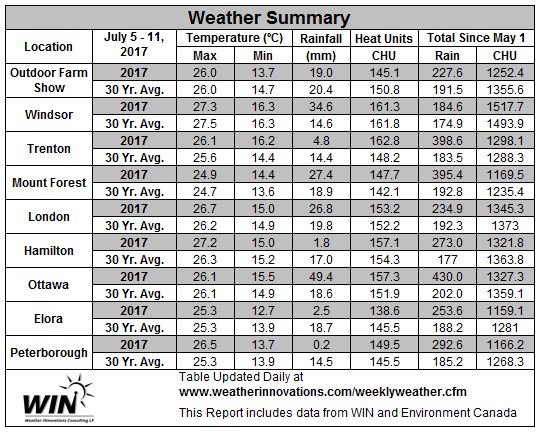