Canola acreage in Ontario remained stable with approximately 29,250 acres planted in 2017, compared to 29,540 acres planted in 2016. Agricorp reports actually show decreased acreage in most regions with two exceptions; canola acres remained steady in Nipissing at approximately 2,150 ac, and the combined regions of Manitoulin, Sudbury and Timiskaming had 8,886 ac this year compared to about 3,600 ac in 2016.

Most of the province experienced rain throughout the last half of April and into early May, which is usually the ideal time to plant canola. Generally speaking, temperatures were below normal in the spring although there were a few very warm days. Snow fell in Thunder Bay and Temiskaming Districts during May, and temperatures were below zero during the May long weekend. Eastern Ontario was very wet through the spring, with May rainfall amounts of 200% or more compared to normal, and growers in the region only had about 3 open days for working fields up to May 31st.

Many growers planted what they could between rains but opted to stop planting canola in late May; approximately 80% of intended acres had been planted by the end of the month. Planting beyond May 20th can lead to issues with heat during flowering, and is also risky in terms of swede midge emergence coinciding with vulnerable canola growth stages. However, some growers continued planting into June, and there were reports of growers with up to a month difference in the planting dates of their various canola fields, primarily in northeastern and eastern Ontario.

Wet conditions turned out to be relatively good for canola emergence. Reports on stand counts from across the province seemed to indicate emergence was much closer to 100% than the typical 60-70% emergence expected. Earlier plantings may have emerged somewhat slowly, but fields planted into warmer June weather emerged quickly. Many fields were moving beyond the 3 leaf stage by the first of June. Later plantings, including much of the northeastern canola, were still in the 2-4 leaf growth stages into mid-June. This was quite different than 2016, where fields were blooming by mid-June. In spite of continued wet conditions and some delayed herbicide applications, weed control was good overall. Canola populations were high, making it difficult for weeds to compete.

Canola that was slow to emerge in cool conditions was vulnerable to insect damage. Reports of flea beetle at threshold came in from many areas, particularly in the southern half of the province. Wet conditions may have reduced the longevity of seed treatments. However, in general, flea beetle levels were similar to past years.

The wet spring meant that much of the canola crop did not have the advantage of fast, early growth to move past growth stages that are most vulnerable to swede midge damage. The insect pest began emerging in late May in most regions, and reached threshold in many field across Temiskaming District before June 1st. By June 7th swede midge trap counts were escalating through many regions, including Grey and Dufferin, and were beyond threshold in parts of North Wellington and Renfrew. In many cases the canola was only at the 2-4 leaf stage by the time threshold was reached, and growers had difficult decisions to make as to whether to apply insecticides at this early timing or hold off until later growth stages in an attempt to use just one insecticide application. It is most important to protect plants when buds are starting to form, prior to bolting. A majority of acres received some insecticide, and many fields were sprayed more than once. In the end, major crop damage and yield loss caused by swede midge was not reported. However, later plantings did see more damage and it is still recommended to plant as early as possible to avoid swede midge damage.

Surveys conducted by Dr. Rebecca Hallett’s research team at the University of Guelph have shown that a beneficial wasp that

parasitizes swede midge, called Synopeas myles(Figure 1), is present in Ontario. To date S. myles has been found near Shelburne, Meaford, Earlton and Cache Bay.  It is likely that S. myles is located at more sites than the survey results show, since sampling was limited in terms of both the number of times a site was sampled and the number of plants collected during the season. S. myles will not be a silver bullet in controlling swede midge and preventing crop damage, but there is potential for the wasp to provide some control of swede midge populations. For effective control of swede midge, multiple tactics which all help to reduce populations and the potential for population growth are needed.

Clubroot has now been detected across many of the canola growing regions in Ontario. In 2016 clubroot symptoms were found on one farm in northeastern Ontario, and as a result a soil survey was initiated.  From approximately 130 soil samples taken across canola growing regions in 2016 and 2017, clubroot was detected in soils from Temiskaming District, West Nipissing District, Bruce County, Dufferin and Grey Counties. In addition, clubroot symptoms and yield loss occurred in 2017 on approximately 8 farms fields within Temiskaming District, Bruce, Dufferin and Simcoe Counties (see Figure 2 and 3). It is likely that the initial clubroot infections in these fields occurred in years past, and have been spreading within and across fields over recent years. Clubroot favours wet conditions, and plant infection can be low in dry conditions, which explains why fewer symptoms were found in 2016 compared to this year. 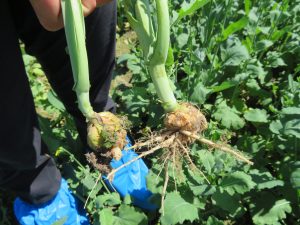 Clubroot poses a significant risk to canola production, and it is now present across much of the province. Canola growers are urged to begin growing resistant varieties if they are located in these regions, or feel they are at risk of clubroot. It is important to prevent movement of soil from infected fields to new areas. Canola growers using custom operators for any field operations, including within other crops in the rotation – because it exists in infected soils, regardless of what crop is present – are at increased risk of having clubroot move onto their fields. Consult www.fieldcropnews.com for local information on clubroot, and www.clubroot.ca for more information about research findings and managing the disease. 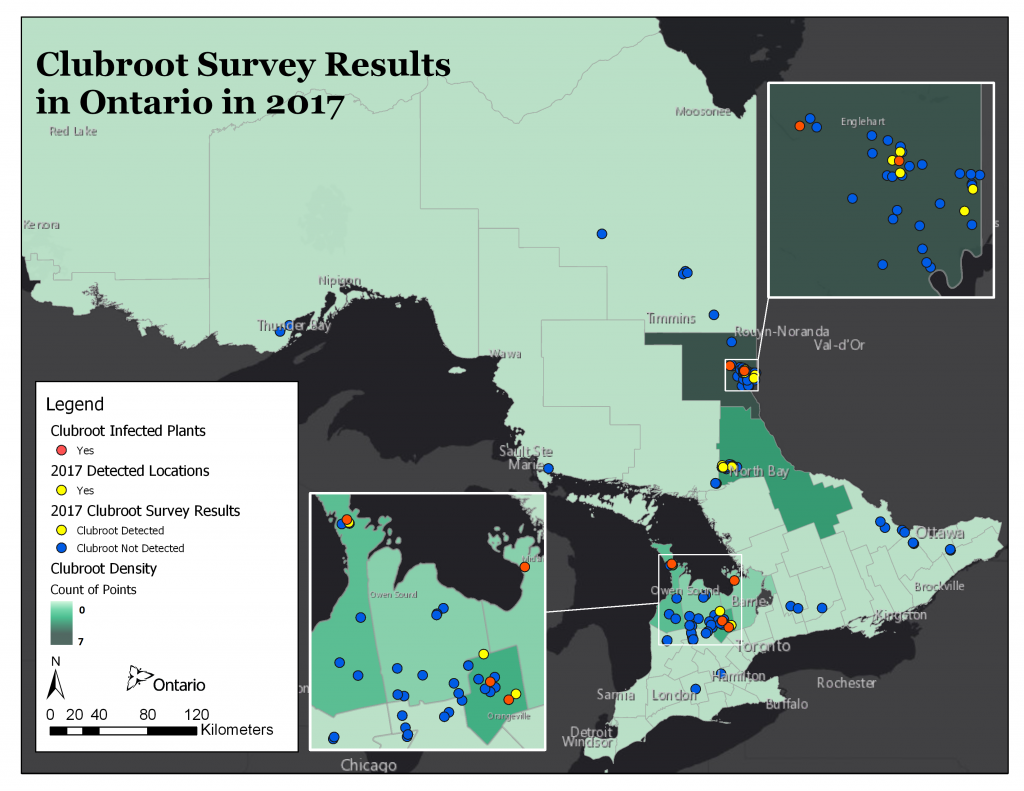 Harvest did not begin until well into September, and was slow to proceed because of wet weather. This meant that canola growers did not capture the advantages of early winter wheat planting that they typically enjoy. Overall harvest was 2 to 3 weeks behind normal. Canola delivered during the early part of harvest came off wet and needed to be dried, but moisture content improved as harvest proceeded. Aside from a few heated loads of grain, quality was good and oil content was high.