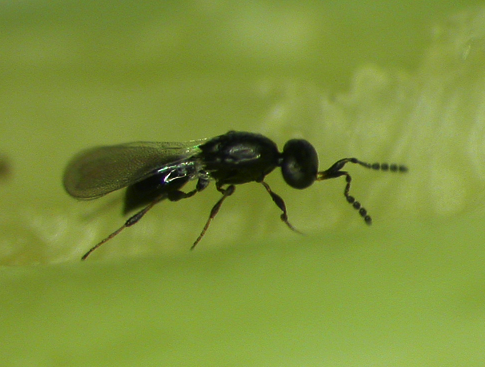 Meghan Moran November 17, 2017 4405 Comments Off on Surveying for Parasites of Swede Midge in Ontario
Canola

Swede midge continues to pose a significant threat to canola production in Ontario. Based on farmers’ experience with the pest and the difficulty of controlling swede midge through insecticide applications alone, it is clear that multiple tactics are required for successful swede midge management. Beneficial insects that parasitize swede midge could be valuable in controlling the pest. Knowledge of the presence and activity of parasitoids will lead to refined integrated pest management strategies.

A survey of oilseed rape in Europe in 2008-2011 identified some possible beneficial insects including the parasitic wasp Synopeas myles (Figure 1). Surveys in Ontario, conducted by Dr. Rebecca Hallett’s research team at University of Guelph, have shown that this insect is present in Ontario as well. In 2016, sampling for beneficial insects that parasitize swede midge was initiated. The search was originally focused near Shelburne/Orangeville, because this is one of the first areas where swede midge was found. It has been a perennial problem in canola in this area ever since, making it a likely place to find beneficial insects. Sampling was conducted at four sites near Shelburne/Orangeville in 2016, and sites near Meaford and Elora were added for the 2017 season. Starting in early June and continuing for 8 weeks, plants showing symptoms of swede midge damage were sampled weekly at each site and brought back to Guelph to monitor emergence of midges and potential natural enemies. The goal of this ongoing study is to identify the presence of S. myles in Ontario canola, and to determine to what degree S. myles is able to parasitize and control swede midge.

A survey of provincial canola growing regions to determine the range of S. myles was also conducted using similar sampling procedures in 2017. Plants at 24 additional sites were collected once or twice during June to July, in the areas of Nipissing District, Temiskaming District, Timmins, Ottawa Region, and the counties of Renfrew, Peterborough, Bruce, and Wellington. Female wasps of S. myles lay their egg right inside the swede midge larva, which continues to develop with the wasp growing inside. Eventually the parastized swede midge larva drops to the ground to form a cocoon in the soil as they normally would. However, an S. myles wasp will emerge rather than an adult swede midge. Growing points of canola plants (the site targeted by swede midge for egg laying) collected in the survey were set in soil in closed containers (Figure 2), and the number of adult swede midge and S. myles that emerged were counted. In this way the percent parasitism by the wasp was determined.

In 2016, S. myles was found at all four sites near Shelburne/Orangeville, and was present for 4 – 6 weeks of the 8 week sampling period. The wasp was typically first detected 1 – 2 weeks after swede midge first emerged. Relatively high levels of parasitism were observed in 2016; across all sites during the week of July 7th there was an average of 27.9% parasitism. There was an average of 9% parasitism per field, with one site reaching 20% parasitism of swede midge. These levels are relatively high compared to observations of S. myles in Europe, and other types of non-specific parasitoids. However, in 2017 abundance of S. myles was much lower, with the highest parasitism rate reaching only 4.1%.  Environmental and individual field differences between 2016 and 2017 likely affected both the midge and beneficial insect populations.

The provincial survey of canola-growing areas led to the detection of the wasp around New Liskeard and West Nipissing. Where S. myles was present, percent parasitism ranged from 0.4 – 7.5%. The results are promising in that the non-native beneficial is being found in more northern regions under fairly limited sampling procedures. It is likely that S. myles is located at more sites than shown in the results, since sampling was limited in terms of both the number of times a site was sampled and the number of plants collected during the season.

Although S. myles is the only parasitoid of swede midge officially identified in Ontario to date, each of the wasps collected so far still need to be examined individually to confirm its identity.  Since there are other parasitic wasps that look like S. myles, it is possible that additional species are present in Ontario and serving as biological control agents against the swede midge.  To date, the observed levels of parasitism are much lower than those required to control swede midge sufficiently to prevent yield loss on their own. Multiple approaches will always be required to control this difficult pest in canola. However, continued research on the environmental factors affecting parasitoid presence and abundance, and the impact of crop management practices on the beneficial, could lead to improved stewardship of these helpful insects and higher rates of parasitism. Maybe in time the distribution and population of this non-native wasp will increase. We will take all the help we can get in controlling swede midge.