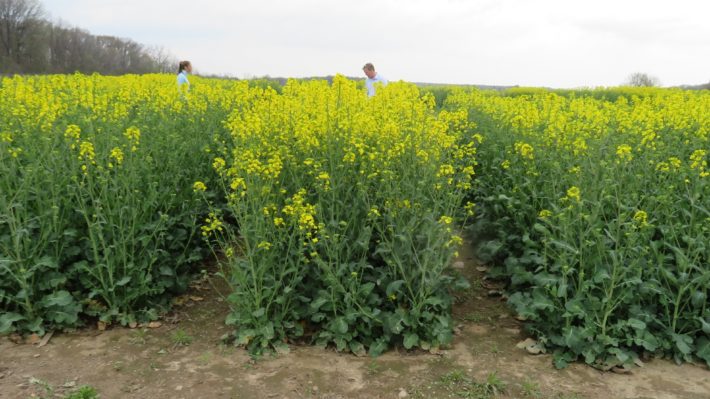 Meghan Moran March 1, 2018 2861 Comments Off on Can double cropping winter canola and soybean kill two birds with one stone?
Canola

Soybean production in southwestern Ontario is increasingly challenging because of the presence of multiple glyphosate resistant weed species. Essex, Kent and Lambton counties have the unfortunate distinction of being home to 4 glyphosate resistant weeds: Canada fleabane, common ragweed, giant ragweed and waterhemp, all of which are very difficult to control in soybean when glyphosate is no longer an option.  Canola production in Ontario also faces significant challenges, primarily in the form of swede midge and clubroot.  Although there appears to be little overlap in the issues facing these crops, a winter canola – soybean double crop could in theory kill two birds with one stone, allowing canola production to escape swede midge pressure while helping to stem soybean yield losses in longer season regions of the province. 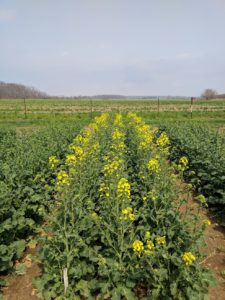 Flowering winter canola hybrids on April 20th 2017 in Harrow (from left: Inspiration, CC17070, Mercedes). Hybrids in the photo were planted on September 13th 2016.

In a similar manner to fall seeded cover crops, winter canola is ideally suited to compete with winter annual and early emerging weeds, such as Canada fleabane and the ragweed species.  The early resumption of growth in the spring means that winter canola has the potential to suppress the germination, growth and reproduction of these hard to control weeds.  Weeds that do emerge and grow in-crop are also likely to be killed when winter canola is harvested in late June or early July, well before these species are normally capable of dispersing mature seed.  In a planned double crop sequence, weed control practices would occur mid-summer between the fall and summer seeded crops which would allow for a wider range of herbicides to be used in a burndown style application.  At this time of year, the majority of weed emergence flushes have passed and, thus the weed pressure facing the summer soybean crop can be managed through a narrowing of row spacing, an increase in the plant population density and, if needed, in crop herbicide application.

From a canola perspective, fall seeded, winter hardy biotypes offer the easiest escape from swede midge pressure.  In southwestern Ontario, winter canola reached 50% flowering between April 24 and May 19 2017 (depending on plant date and hybrid) meaning that the vulnerable stages of canola development occurred well before overwintering swede midge could emerge from the soil in late May or early June.  Similarly, the advancement of the reproductive phase of development in winter vs spring canola meant that all but our last plant date (i.e., Oct 17 2016) avoided feeding damage from other insect pests including lygus and seedpod weevil.

Although we have yet to work out all of the agronomic issues involved with implementing a winter canola-soybean double crop, the early results are promising.  In our 2016/17 planting date trial, winter canola hybrids reached physiological maturity from June 21 to July 12 and yielded between 3400 and 5800 lbs/ac with an average of 4700.  A separate but similarly structured planting date trial conducted over the past two years indicated that a summer soybean crop planted during the first 3 weeks of July could yield between 2800 and 3400 lbs/ac for a 00.2 maturity group soybean and between 3500 and 5000 lbs/ac for a 3.3 maturity group soybean.  Bearing in mind that these results reflect small plot research trials conducted in the most southerly county in the province, the economics of a winter canola – soybean double crop are likely to be favourable throughout the rest of southwestern Ontario.  In fact, on-farm experience in Oxford County in 2015/16 indicated that double crop soybean following canola was economically viable even without reducing the relative maturity of the seeded variety.

In the coming years our research will build on these initial planting date/variety trials to address more complex questions such as how to best fit a winter canola-soybean double crop into existing corn-soy-wheat rotations, how to deal with other known pests of winter canola including slugs and how to manage the preceding crops’ residue to ensure stand uniformity when seeding winter canola.  If any of our current or future research topics are of interest to you, please don’t hesitate to contact us (eric.page@agr.gc.ca); we are always looking for farmer feedback and engagement.