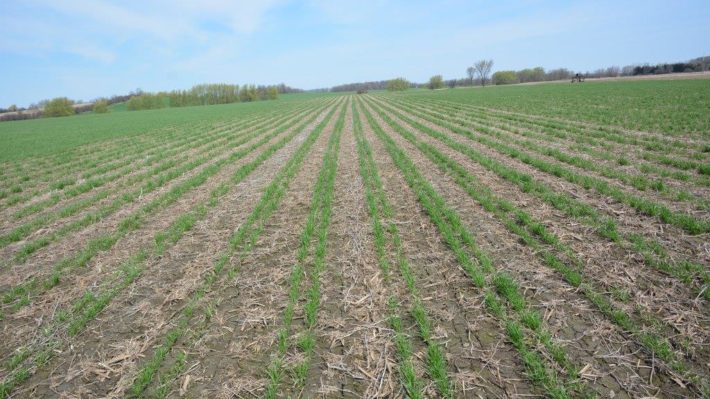 Equipment has really started to move in the fields since Monday. Prior to that, only sandy soils had seen planters. Some manure is going out, although those with enough storage are waiting to apply in the summer instead. This decision needs to balance timeliness of planting, compaction avoidance, and best use of the manure nitrogen for the current season’s crops.

There is a contrast in some big operators having lots of crop in the ground while others haven’t turned a wheel as of Wednesday. This is mostly a function of location as it influences soil type and rainfall.

The first day of equipment moving widely across the area was Sunday the 6th.

General consensus from the meeting was that the order of priority to the coming weeks is:

Late planted wheat (October 15-20) has been slow to green up and grow. Variability in these stands started to show up this week. Fields planted without seed-placed phosphorus are also higher risk. The decision of whether to keep these stands or switch into corn depends on a variety of factors: cost of the reseed, demand for straw, and whether the cereal is to be fed on farm or sent to an elevator.  Stands that uniformly have a minimum of 5 plants/foot of row are considered a threshold that will deliver at least 80% of yield potential. This still makes decisions difficult as it depends on the uniformity of the stand and the areas of poor vs very good wheat within a field.

Agricorp reported very few fields that had been released for reseeding, and mostly being seen because of poor stands in low areas of fields that are just too big.

Seed placed P is really showing its benefit in late planted fields where it was used. Pictures on twitter by Peter Johnson show the amount of contrast from the long term P trials.

Attempting to patch poor areas of wheat is an option if you can feed the grain on the farm. If the crop is destined for the elevator, people are encouraged not to patch and should replace as quickly as possible. Mixed wheats delivered to the elevator are very problematic.

While too late for this season, using a drone to get a different view of a wheat field in spring brings are different and clearer picture of how the crop is really looking and should be considered in years to come.

Most wheat will have nitrogen by the end of the week. Next step with the lush growth will be scouting for and deciding if a T1 fungicide application is warranted. While no stripe rust has been reported in Ontario to date but has been detected in Kentucky and southern Illinois. It arrives in Ontario as spores riding on weather fronts so it may be coming soon. Other things that are more likely to be at issue currently is the possibility of Septoria and other early season foliar diseases.

Most of this is planted and acreage is thought to be about normal to slightly lower despite the later than normal planting date.

Approximately 5% of corn acres have been planted in the region, on light soils. A few new corn planters are heading to the fields this spring. There was some confusion among new users about tank vs vacuum pressure. Let the monitor be the guide to ensure accurate and uniforms populations. Another planter question was about going back to the use of talc in the seed hopper. As long as the seed treatment is not a neonic, talc, graphite and other products can be used. Planters with variable rate capability are starting to show up in the region and individuals in the group were interested in seeing test plots done to confirm their value. It seems that the economics of retrofitting current planters with variable rate capability is just too high. It will come with new planters and for the most part all new planters will be equipped that way.

There have been some questions about 2,4-D ahead of corn planting, but the recommendation is plant and wait for the corn to emerge before applying.

Planting really hasn’t started. Even with tight planting windows, it is important not to skip pre-plant herbicide applications. This is very problematic if resistant fleabane is around unless growers have Xtend soybeans, which from previous meeting the group thought would only account for 40% of the crop in central Ontario. If you have fleabane, treat it as if it’s resistant. This is the year when we will really see how extensive the resistance is in the region.

Be aware of the added cautions around use of dicamba in terms of potential movement off target because of drift and weather inversions. Despite the cool weather to date, there have been a couple of days when weather inversions did occur.

Weed control needs to be a system, and we need to realize that in most cases, weed control has become a standard two pass program to ensure we stay on top of fleabane especially. There is significant grower resistance to the two pass systems especially the ones over $20/ac but it is becoming of reality of soybean production.

A survey was done around Peterborough four years ago looking for soybean cyst nematode, but none was found. However, this pest travels with soil on field equipment and is known to be in Northumberland, and the range could be broader. When soybean fields look tough once they get into June and beyond, suspect SCN and have some testing done.

Pasture and hay fields have had a slow start, with very little grass growth until the last day or two. Management is critical to minimize damaging wet pastures: daily moves can reduce pugging damage, and research suggests that cattle can consume their daily forage needs in two 3-hour grazing periods/day. Known as on-off grazing, this is another strategy to reduce pasture damage when hay inventories are tight, but field conditions aren’t good.

There are some concerns about alfalfa winter injury, particularly on fields that were cut late in the fall or had late manure application. Last year’s wet conditions and potato leafhopper damage were hard on new seedings so these fields should be monitored closely. Supplies of high quality hay/haylage are tight. Fields planted 2015-2017 may be in tough shape though many growers are resisting rotating out because of low inventory, choosing instead to add Italian ryegrass and other grasses to maintain yields. Fields that need the closest monitoring are those that had late cutting, manure application or have poor drainage.

Many new seedings have gone in within the last few days. Group consensus is that there is a lot more room for improvement in forage management to get yield, quality and longevity higher. Fertility is often a concern on forage fields. Generally potash is the most limiting nutrient. Use a soil test to ensure the crop has adequate P and K before worrying about secondary nutrients like sulphur and boron. The window for producers applying Priaxor fungicide to alfalfa is now, as preliminary research suggests the biggest yield boost when applied 21 days before harvest (PHI is 14 days), and when the crop is 4-8” high.

Corn silage inventory seems to be alright. Some growers are considering switching to a shorter day variety for an earlier harvest to combat the overall tight forage supply.

Canola is being planted in the region, though no one had a percentage of acres estimate. Acres are expected to be up this year, but more so in the north.

Fleabane is very common in central Ontario; most farms have it, whether you know it or not! What is unknown is how much of the fleabane is glyphosate resistant. Fleabane questions are coming from all over so awareness is getting better. The simplest approach is to treat all fleabane as if it is resistant: by the time you figure out the glyphosate didn’t work, it’s usually too late to try anything else. Some plants are already bolting, so the window to spray is closing fast. To prevent weed pressure from reducing yield, a minimum two-pass system is needed. Even though we are in a compressed planting window, pre herbicide programs in corn and soybeans need to be maintained to keep on top of this weed.

Don’t let this weed go to seed, and encourage your neighbours to do the same. Agricorp indicated that train wrecks with this weed are already happening and they are going to impact people’s rates and ceilings. Fleabane control is important in all crops to keep the population manageable.

Soil maps are being updated for Peterborough County. The mapping team will be asking landowners for permission to dig small soil pits on their land throughout summer and fall as part of data collection.

Agricorp is hiring an Adjuster for Stormont, Dundas & Glengarry, and Ottawa.

The Soil and Crop Improvement Association is administering both the above programs. For more information in Quinte and East Central regions, contact Paul Reeds (705-341-4915). 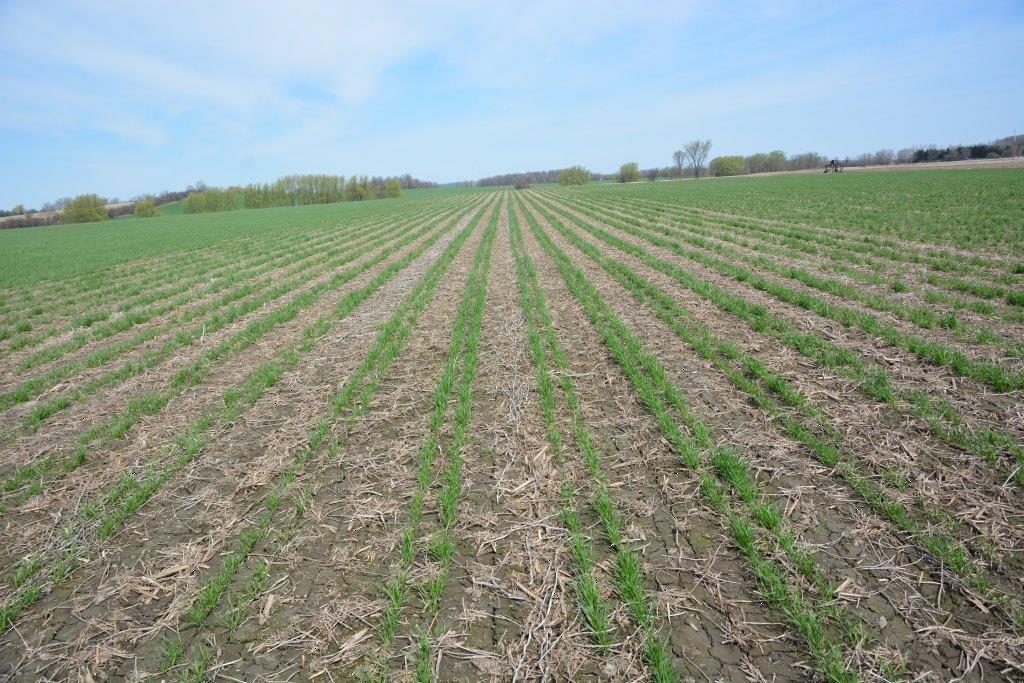