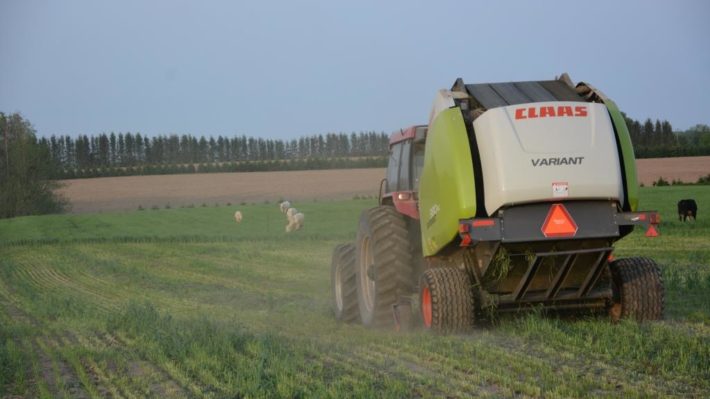 Thanks to Dave Townsend of BASF for sponsoring breakfast.

Not overly wet but enough small, scattered frequent rains to make it just a bit sticky. They were hoping, for the most part, to have equipment back in the fields Wednesday but it rained quite heavily across the area Tuesday morning. The crowd doesn’t consider the conditions and soils to be overly wet, just enough to disrupt field operations briefly. But all agree we need a stretch of more than 3-4 days between rain events! There were some comments that the challenging spring is meaning that “every little thing” is showing up in terms of compaction, seeding conditions, fertilizer problems or misses etc.  However, the group all agree that in general we are off to a much better start than last year and that farmers are overall quite optimistic.

With the big region covered by the meeting and inconsistency of rainfall amounts, the range since mid last week was 0.25 to 3”.

One important point is that spray equipment is really being challenged with the compact window of the application season impacting optimal timing etc. But most important is that sprayer “tank cleanout” should not be ignored or skimped on as the consequences can be severe.

While mostly in across the region, there are a few pockets of areas that still have a fair amount to put in. Eastern area of the region in the Halton and Peel area are struggling to get the crop in. While some areas are nearing finishing, others are as low as 50-70%, some of this impacted by delayed manure getting to the field. Early planted corn emerged and some as much as 3 leaf although majority just emerged to 1 leaf.

There is a general concern among the crowd that the first plantings went in under tougher conditions. Even farmers have been saying they are concerned the first couple of days of planting might have been hurt. This is something that will have to be watched over the season, especially if we get a long period of dry conditions. While having patience to plant when the ground is fit almost always pays off, the sheer volume of acres that need to be planted impacts the farmers decision on when to start into a field.

A fair amount of the acres have pre herbicides applied. Concern on whether, with the way the rains have come,we have enough to activate those herbicides. Really need a good ½-1“ of precipitation over the 7-10days following application to get them effectively working. Monitor the amount of rain over that period and then if not sufficient, keep on top of those fields in case resprays are required.

The area planted varies widely across the region. As high as 50% on lighter ground and on the western side of the region and as low as 15% south, north and east. Soys have been going in under better conditions than corn. Its been taking about 10 days for soybeans to emerge. As the temperatures heat up the soybeans will emerge faster so everyone has to keep on top of pre emerge herbicide programs and these are very important for fleabane control especially and absolutely on IP beans.

There are reports of some seed lots having lower germination due to many factors, most associated with last year’s growing season. Watch for splits and cracks in the seeds as they enter the planter and adjust where evident.  Its still relatively isolated, but be aware of it.

Some fields have been planted without burndown or planting date slightly delayed as they tried to get the burndown on. Missing burndown can lead to lots of problems, especially with IP beans. Large dandelions in IP really are going to get away without the burndown. The only option is Classic and its effectiveness can be problematic. Once roots are bigger than your thumb, you might get burndown of the leaves but they will come back.

There have been a couple of calls on “crusted” soybeans struggling to emerge. With this type of spring often leading to excessive tillage, its sets things up for crusting when the soil is made so fine. Less tillage is better ahead of soys. There have been lots of very muddy planters in the fields which suggests they are in there too wet. This can cause problems later so should be monitored and try to make connection back to the planting conditions in terms of discussion with affected farmers for planning next springs approach.

There was a significant discussion on soybean populations. Trend is to lower populations that farmers are making themselves. Some as low as 130-150K but the group says minimum of 160K on the best ground and in general should still be in that 175-220K range. Anything less than final population of 120K is not sufficient and we had a lot of this last year. Also talk of better seeding with planters vs drills and seeing more move to use of planters mostly in 15” rows. Planting is critical for seeding depth and placement of the seed into optimal conditions. Target is uniform emergence of the whole field, the actual date of emergence is less of an issue. Seeding depth and condition of soil at that depth is critical to supporting even emergence. This sets things up well for the rest of the season.

The later planted wheat is still lagging behind. Even with N application, it just hasn’t bounced forward and in fact some fields are retreating. Agricorp received a number of damage reports on a portion of these late fields in the last two weeks. While it is quite a few calls, it still represents a very low percentage of the total wheat acreage. A number of these fields have been released for replanting.

Wheat growth stage varies, ranging from flag leaf in the Ripley area to 1st node in the Alliston area, but elsewhere it’s mostly in the 2-3 node stage. The majority of crop will be at flag leaf in the next week. Growers should continue to scout their fields for disease as this is the critical time for protecting yield with a T2 fungicide if necessary.

The crop that was planted early is progressing well. While a number of acres have received a herbicide application, at this point for most fields it is too late as we approach flag leaf. Better to drop the herbicide and concentrate on timing the T2 and T3 fungicide applications optimally if needed. Weeds not controlled at this stage have already done their damage to yield and the investment in time and product at this point is not economical and can result in injury. Where weeds are a real problem that haven’t been addressed yet, plan for a pre-harvest herbicide treatment to aid harvest and prepare for the next crop.

In general it was thought that spring herbicide applications were down so wondering if it was because of fall programs or farmers just avoiding because of the season and state of the wheat crop.

There was a great deal of discussion around weed control programs in winter wheat. The group strongly believes that we should be trying to move producers to fall herbicide programs. The results this spring have really shown the value of that timing. Timing is often hampered in the spring and those overwintering weeds get big and beyond effective control maturity quickly reducing the investment in spring herbicide programs. Spring weed control timing is impacted by cool overwintering temperatures which offer concern over crop injury, wet field conditions can impact optimal herbicide timing, and weed growth of those overwintering species becomes very rapid. Best to control them in the fall and scout in the spring with the hope of a good crop canopy greatly reducing the need to spray spring herbicide. Prime examples of the success of fall herbicides have been dandelion and fleabane as well as other winter annuals. Some though were concerned about avoiding spring applications. Wrecks can happen and these can impact harvest and next crops. It comes down to knowing the fields and scouting in spring to ensure fall treatments are doing the job. This is especially true for late planted fields that don’t have the growth coming out of winter or the vigor when spring weather kicks in.

Early spring diseases have been low with minimal fungicide applications occurring to date. Where applications have been made is on more susceptible varieties and where there is really lush growth. If disease pressure is low pass on the T2 and concentrate on optimal timing for the T3 FHB application.

Still 2-3 weeks away from FHB sprays but it is field to field dependent so keep scouting those acres.

Cereal leaf beetle adults have been found in the Alliston area. Best to scout fields where this pest has a history of showing up first, particularly mostly on sandy soils ground though infestations are widespread this year so don’t assume only fields with a history are at risk. Scouting is advised for the next two weeks or so.

Alliston has about 50% of the crop in with hilling and spraying operations started. No signs of plant emergence yet.

Only about 10% left to go in the region, while the north is well behind.

Really starting to see some growth happening after the slow season start. Only a couple of fields were reported to have been cut so far. Expecting that to change rapidly by the end of the week into early next week as the dairy guys get ramped up. For the most part the forages withstood the winter okay. The issue is that the last couple of years have beat up some of those fields, and the quality of last years crop meant that farmers were going through feed faster than anticipated. Some really need feed.  Best insurance against forage short falls is a few more acres of crop.

Too late for any fungicide treatment now based on “days to harvest” and efficacy! If protection is needed ahead of second cut, applications should be made 7-10 days after first cut.

A good amount of discussion on this topic. Group in general supports cover crops, but this and last spring have shown some of the problems. We still have a lot to learn in cover crops management. Farmers finding fields with cover crops needing more tillage this spring and the soils are cooler, clamy and wetter. Even soybeans seeded into green rye last spring was causing wheat planting issues last fall.

While there are lots of concerns, the group wanted to see work continue and better address management for the various conditions of soil types, planting methods, seeding rates etc so as not to disadvantage the following revenue crop. Cover crops and strip till was discussed with fall strips being much better because again, they just can’t get to the fields timely with spring strips into the overwintering cover crops. In general soybeans are more resilient in green planting than corn.

There was some comments that glyphosate applied to cover crops may still be available to wash off onto emerging crop plants through the green mat and lead to injury. Glyphosate is tied up quickly in the soil but not as much so on the plant tissues contacted by the spray.

Canadian Agricultural Partnership – The first intake window closed May 8. The next intake will be August 7-28. Funding is available for eligible projects involving continuous rinse systems for sprayers, cover crops, and plant health initiatives.

OSCIA Forage Masters Competition closes July 15 and they want to increase registration, so looking for help to promote the program. 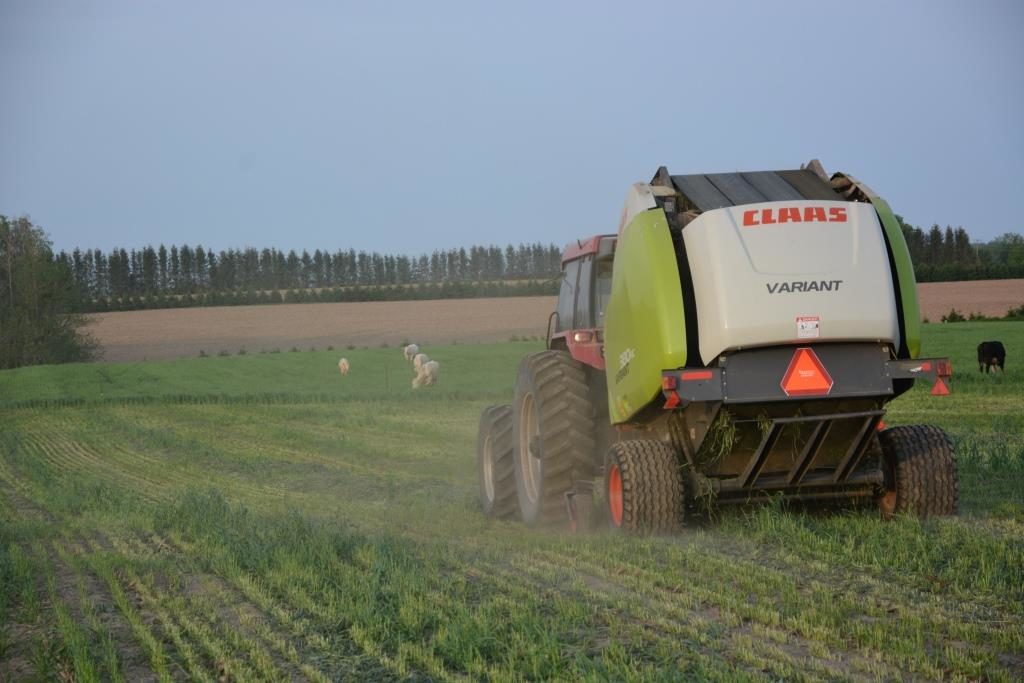