Planting of all crops is much further along than last week, although the general comments about slow progress on fine textured soils are still applicable. Regions with clay soils are dry on top but gummy below, so delays continue. There is rain in the forecast this week for much of southern Ontario so further delays are a possibility.

While planting is mostly complete in many parts of the province, operations continued over the past week on finer textured soils and localized areas which had been receiving frequent rainfalls. Georgian Central region is reported to be close to 75% complete while growers in parts of Kent, Essex and Lambton are continuing planting as well. This has been the first window of significant corn planting on finer textured soils in Essex, Lambton, Elgin and Haldimand/Niagara areas which are pushing hard to catch up before the next rainfall.

Staging is variable depending on planting date. While some corn is still being planted, a large portion of the crop is in the V2-V3 stage, with more advanced fields approaching V4 to V5. Warm weather and the good soil conditions for the majority, have resulted in reports of excellent, uniform stands across most of the province.

In regions where corn planting is complete, growers are pushing through completion of soybean acres as well. Soybean planting is estimated to be around 80% complete. Planting progress on heavier soils continues to move slowly, including in Essex, Lambton, and parts of Haldimand and Niagara.

The heat over the past week is encouraging soybeans to emerge within a week of planting. Most soybeans are currently at the cotyledon to unifoliate stage, and earlier planted fields are in the first trifoliate stage. Populations are uniform and looking good, except on heavier textured soils where crusting has become a problem.  Leaving a thin stand that is uniform is often more profitable than replanting.  On most soil types, do not replant a stand of more than 222,000 plants/ha (90,000 plants/acre), in 19 cm (7.5 in.) row spacing.  Heavy clay soils need a minimum of less than 250,000 plants/ha (110,000 plants/acre) before a replant is worthwhile.

The warm weather has led to fast growth of weeds, and in some cases soybeans emerging before burndown herbicide treatments were applied. Where soybeans have emerged, there is a risk of crop injury with many of the herbicides commonly tank-mixed with glyphosate.  Some weeds like lamb’s-quarter have been observed moving from cotyledon to 4 leaf stage within two days. Note weed growth stages in your field and plan to time herbicide applications early enough to get good control.

Many winter wheat fields are variable in colour (Fig. 1). It is suspected that non-uniform spreading of urea and ammonium sulphate, and resulting sulphur deficiency are the cause.  Although the fertilizers may be blended, they have different densities and may not spread evenly when mixed. The majority of acres are between flag leaf and early boot with some reaching heading growth stages. Other than a few fields with mildew, there are essentially no reports of diseases in the crop, so fungicide applications at the T2 timing may not be highly beneficial this year. The crop is moving quickly toward heading, and so far models are predicting low risk of Fusarium head blight.

Spring cereals are generally at the 3 to 4 leaf growth stage with herbicide applications going on.

Cereal leaf beetles (CLB) are reaching threshold levels at some locations, despite being quite small and still difficult to spot (Fig. 2). Control is warranted if an average of three larvae per tiller is found before boot stage. One CLB adult or larvae per stem warrants control after boot but prior to heading. If significant feeding is taking place on the flag leaf in the early heading stages, control may be warranted.

Forage producers in the southern half of the province have been busy harvesting the first cut of hay, but there are delays in the north and northwest. Rainy River is on track to harvest at the beginning of June. Cooler conditions in Thunder Bay District have delayed harvest by about a week and excessive moisture through Algoma District are resulting in a 2 to 3 week delay. Where there are delays, the grasses in hay mixtures are getting ahead of the alfalfa so there will be a difference in maturity at harvest.

In more southern regions the forage crop grew quickly and outpaced the alfalfa weevil larvae that were slow to develop. It is important to scout the regrowth after 1st cut as the weevil will start to reach the more damaging stages of 3rd and 4th instars. The characteristic symptom is the alfalfa plant not “greening up,” due to weevils feeding on the developing crown buds. The presence of two or more active larvae per crown, or 4–8 larvae per 30 cm by 30 cm (1 ft2) indicates a need to spray the stubble with insecticide. More information on alfalfa weevil is available in the Agronomy Guide for Field Crops at: http://www.omafra.gov.on.ca/english/crops/pub811/pub811ch15.pdf

Seeding of canola is essentially complete. There had been delays in northern regions because of late April snow and wet conditions. In Temiskaming District, most canola is yet to emerge or has just emerged, and most canola has emerged in West Nipissing. Earlier planted acres in Eastern Ontario and Bruce, Grey and Wellington counties is between the 1 and 4 leaf growth stages.

Flea beetles have not been noted in the northern regions yet, but are present in many other canola growing regions. So far pressure appears to be low and seed treatments are holding flea beetle back. Insecticide applications should not be applied until at least 25% damage is observed. Once canola reaches the 4 leaf stage it is usually beyond economic damage.

Swede midge have been observed in Elora and Shelburne, so growers should have pheromone traps in place and check them every few days. Refer to past articles on FieldCropNews.com for information on managing swede midge during early canola growth stages.

Planting of dry beans is approaching 25% complete. Most bean acres are on well-drained ground and there has been no risk of frost in the past week or more, so growers have taken the opportunity to get a bit of a head start. June 1st is typically the optimal planting time, but seeding into mid-June is acceptable. Ideally, adzuki beans should be planted by now as they take the longest to mature. Cranberry beans are the shortest season class of beans and can be planted into mid-June. Some fields are getting a bit dry; beans should be planted to moisture up to a maximum of 2.5 to 3 inches, otherwise wait for some rain. Regions that are expecting a storm should wait until after any pounding rain to plant so as to minimize issues with crusting. 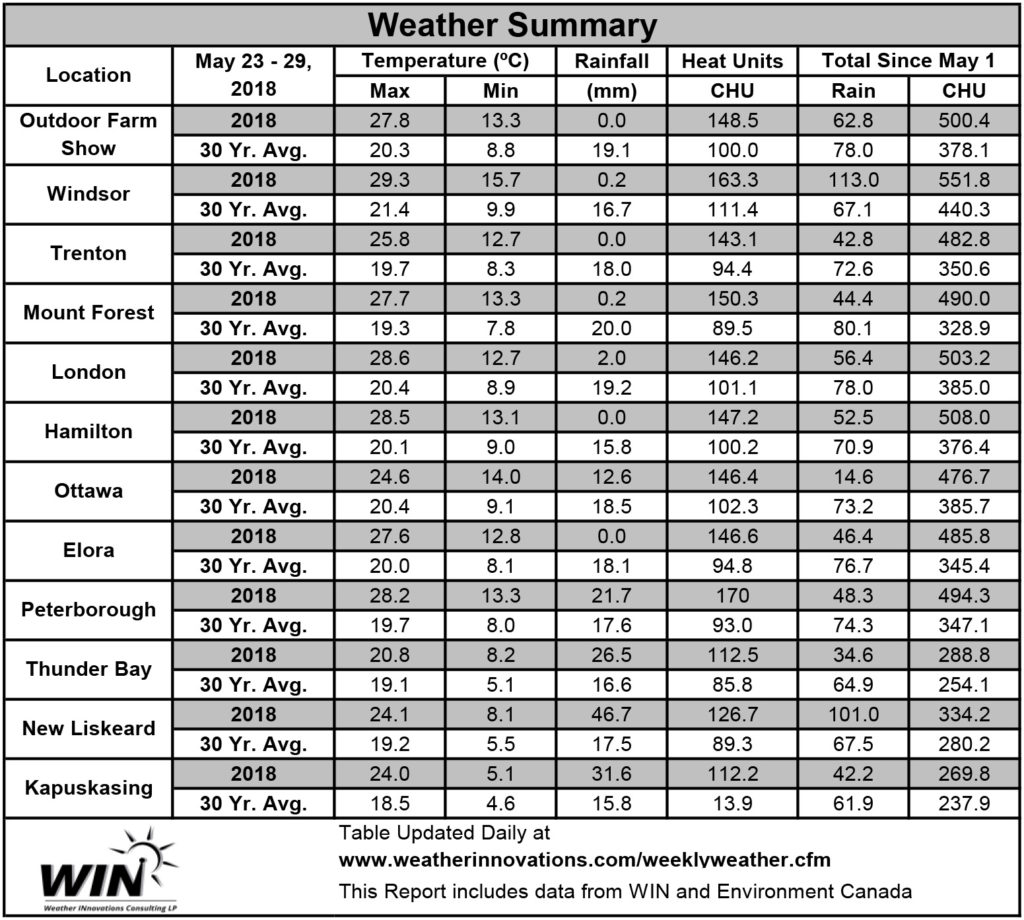