Breakfast Sponsor: Thanks from the group to “Bob Thirlwall” – Monsanto

Quotes of the week –

Synopsis: May 1st to May 7th there has been 121 CHU compared to 28 CHU last year. One year ago there were two nights below zero in that timeframe. This past week there were 2-3 days of low humidity so things dried up fast. Rainfall in the last few days was spotty with rainfall of less than half an inch to over two inches. The winter wheat crop continues to look good. Almost all of the nitrogen is on or will be in the next day or two. Corn planting is moving into full swing. Some in the group are disappointed to see the amount of tillage being done and the lack of crop residue on the soil surface.

Winter Wheat: The winter wheat crop looks fantastic and basically, all of the nitrogen fertilizer has been applied. There was very little burn from 28% application to the wheat compared to last year. The streamer bars do a good job of reducing the injury. Heaving is still being observed on the heavy clays, some heaved badly. Some re-rooting is occurring. Some of the early planted wheat experienced heaving as well. Phosphorus response on wheat was tweeted out by Peter Johnson (@wheatPete)? Herbicide applications are going on wheat. Wheat fields that received a fall herbicide application are clean. Those who are applying weed control are considering tank mixing with a fungicide especially if nearing flag leaf. April was harsh on wheat in the area north of London up towards Bruce County due to the cold wet conditions.

Supplies of sulphur (ATS) in Ontario are running low. There is ample sulphur south of border but there are no trucks to get it here. There were several reports of the response to sulphur being variable. There has been a tremendous change in use of ATS. Three gallons per acre was the typical recommendation but there are recommendations in the countryside to put on 8 gallons. 8 gallons is not justified but many are recommending 5 gallons per acre due to the cool spring.

Syngenta is testing Modis a plant growth regulator for wheat. It should strengthen the stem for improved lodging resistance. It is applied when 2 nodes can be felt. There was discussion about the market accepting wheat that has been sprayed with Manipulator. P & H are accepting that grain while Thompsons and Agris are waiting for confirmation of acceptance by the U.S. It is difficult to understand why there is a MRL for grain when there isn’t one for flour. Manipulator has been around since the 80’s. It will tank mix with everything. Avoid use when cold nights are expected. Zadoks growth stage 31 best time to apply and works well up to Z37. The later it is applied the less efficacious it will be. In Europe half is applied at Z31 and half at Z32.

Winter wheat is at the flag leaf emerging stage in south Essex County. When combining a fungicide and herbicide application use 20 gallons of water and avoid cold temperatures. Stripe rust hasn’t spread very far in the U.S. This is partly due to weather conditions but it is also due to more tolerant varieties available there and more fungicides being used. The last couple of years we have typically seen stripe rust show up in Ontario the 2nd and 3rd weeks of May, so keep an eye out for it. It is a more normal year for stripe rust here. It has been cool in U.S. so there has been limited spread there.

Corn: Corn planting has begun. There has been lots of activity on the lighter soils in Essex, Chatham Kent, Strathroy, Melbourne (close to 20% corn planted) and the east and west ends of Elgin County. Over all the area is closing in on 20% planted with some areas at 30 to 40%. Planters were in the field Monday May 7th it will ramp up from there as long as the weather holds. The clay loams should start to be fit today. The clay soils seem to be planting/working up better than last year.

There were reports of strip till soils staying wet. There is good evidence to show that reduced tillage requires potash in the starter, especially in soils that are low in potassium. The parent seed for seed corn is going out so planting should begin shortly. Bob Thirlwall planted sweet corn April 21 and it was up in 14 days, the seed planted April 29th came up in 10 days. Soil temperatures are generally warmer than expected.

Agris has hired an intern to work on validation of the effigis nitrogen model developed by Nicolas Tremblay. The model requires the date of expected sidedress, rainfall 15 days before and the forecast for the next 15 days and the price of nitrogen. They are setting up replicated trials to compare the nitrogen rates of the model to a low rate of N and the grower’s rate. The new website will be launched May 15th.

The planting date and yield potential research by Hooker, U of G, Ridgetown Campus found that one can expect 95% of corn yield at Elora when planted May 20, Exeter May 25, Ridgetown May 30.

Know an experienced strip-tiller? OMAFRA is developing a strip till network. If you know growers who have experience and would be interested in being part of the network to share their experiences contact Ian McDonald at ian.mcdonald@ontario.ca

Soybean: The odd field has been planted and seed soybeans will be going in later this week if the weather holds up.

Weed Control: Lauren Benoit (Peter Sikkema’s grad student) reported that they have confirmed PPO-resistant (group 14) waterhemp at four locations in Essex county. The mutation confers resistance to all the chemical families in group 14. This is the first group 14 resistant weed confirmed in Canada. There are currently waterhemp biotypes in Ontario with confirmed resistance to four herbicide modes-of-action glyphosate, atrazine (but not metribuzin), group 2 herbicides and group 14 herbicides.

In corn our best options are still Acuron or Lumax applied preemergence. This has larger implications for control of waterhemp in soybean. The group 15 herbicides (Zidua and Dual) generally provide the best control and metribuzin still has activity. POST emergence, Liberty is the best option in a two pass program. Research from Mike Schryver shows 95% control of waterhemp using Boundary f/b Liberty in a two-pass program.

Dicamba has very short residual control for waterhemp. Waterhemp is a summer annual and keeps germinating all season.

Peter Sikkema suggests for control of wild carrot in Xtend soybeans use Classic in the program. At the high rate of Valtera if multiple rain events follow application it can set back soybeans. The best herbicide to add to a burndown for glyphosate resistant fleabane is metribuzin. Between 2,4-D and dicamba, dicamba is safer on corn. It should be applied at the spike to 3 leaf stage. Do not incorporate! If it is put on pre-plant hope that a heavy rain doesn’t wash it into the soil and plant the corn deeper. A grower had put 28% N on his wheat and was wondering how long to wait before putting on the herbicide. The consensus was to wait 2 days.

Richard Anderson reminded everyone to be aware of inversions as tomatoes are being planted.  Fleabane grew an inch last week. Use dicamba with care. Do not apply dicamba preplant or preplant incorporated in corn.

Group 1 resistant crabgrass was found in Dashwood as part of Darrin Robinson’s U of G, Ridgetown Campus, work.

Horticulture Crops: California research applying compost to a tomato crop to improve yields found that it was the potash which was giving the yield boost. 85% of the sugarbeet crop is planted. Tomato planting will start today. There was a late season boost in tomato acreage from Highbury Canco. The plants in the greenhouses look good. Automated transplanting is gaining interest as it is getting harder to find labour when needed for transplant timing. The sugarbeets planted in March have an excellent stand. Some sugarbeet fields are crusting, if rain doesn’t help need to bust the crust. Some of the sweet corn under plastic is at the 2 leaf stage now. Most of the plastic used was developed in warmer climates so up here the plastic is slower to breakdown. Growers usually end up so cutting it open to let the crop out. The high winds last Friday caused 50% of the plastic to move off the crop. The rest was cut off to keep the crop even. Conventional sweet corn planting is starting.

Still concern amongst tomato and other horticulture growers as well as retailers, consultants pertaining to chlorothanlonil supply. The Syngenta plant is producing chlorothalonil and locally waiting to see what the supply will be for Ontario.

Agricorp Report (Leon Walczak): Wheat damage numbers are down from last year. The warm weather has greened up the crop reducing calls with claims.

Nutrient Supply: Truck drivers are in high demand and as a result not as many liquid carriers as there used to be. Have trucks but hard to find truck drivers. There are 4.5 loads for every truck driver. In stop and start springs if the driver is sitting with nothing to do they will find another job. A good lengthy discussion resulted.

Dave Hooker: Continues the work on the long term trials at Ridgetown. He has just received funding for a 2nd phase of the long term phosphorus and potassium research where they will now look at a drawdown phase. The long term rotation and tillage trial received funding for comprehensive soil testing by depth. Past sampling has shown differences down to a metre. The long term cover crop study is in year 2. There is one at Ridgetown and one at Elora. At Ridgetown the over wintered cover crops have enough growth to harvest but at Elora there is no growth from the over wintering cover crops. It shows the differences in location and the weather has on cover crop growth.

Cover Crops: Adam Hayes is working with Anne Verhallen and Tracey Baute to install insect traps at a cover crop trial near Dresden to see if there are any differences in insects with the cover crops and without. Pay attention to annual ryegrass burndown as timing is important for control. Normally it would be controlled at the end of April. At this stage it may be tough to control it. Cover crop growth was less this year compared to last year. Peter Sikkema recommends controlling the cover crop before planting.

Insects (supplied by Tracey Baute after the meeting): Despite the slow start to spring, we are now accumulating growing degree days (GDDs) quickly, especially due to the warmer nights.  Crops already growing are soon to see some insect activity.  Locations in the southwest have accumulated enough GDDs to start experiencing alfalfa weevil larvae and cereal leaf beetle (both adults and young larvae) feeding.  If temperatures continue as is, central and eastern locations will start to see activity in a week or so. For crops like corn that are still being planted, the insects are getting the head start. Black cutworm moth migration in Ontario has increased due to the recent storm fronts. With GDDs accumulating quickly, larvae from their eggs will develop quickly. They will feed on weeds or cover crops until the corn plants start to emerge. Fields in southwestern Ontario could to see emerging corn plants being cut as early as later next week. Plant Cut Off of at Soil Level by Black Cutworm (Photo Credit: A. Schaafsma)

Next Meeting: Ridgetown Agribusiness meetings are held in the Willson Hall Campus Centre (downstairs) at the University of Guelph Ridgetown Campus. Meetings start at 7:15 am with breakfast and every two weeks on Tuesdays.  One continuing education unit (CEU) is available at each meeting for Certified Crop Advisers. Next meeting is May 22, 2018. 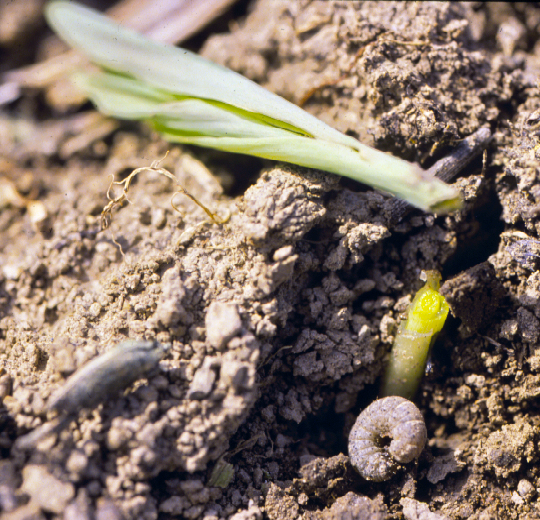