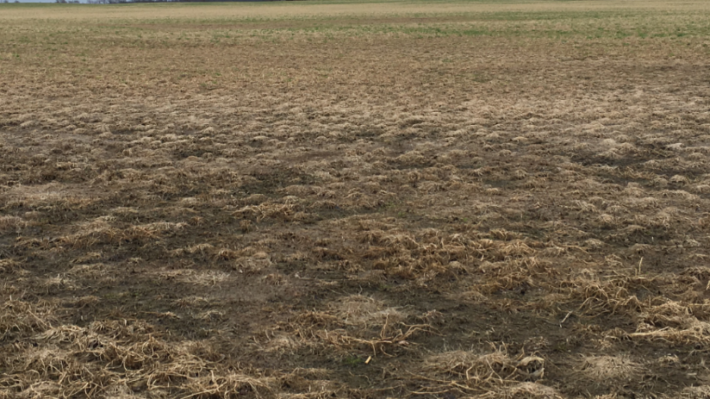 Big turnout at the breakfast meeting is a good indication that there’s not much happening in the fields. As in most of the province, wet conditions and additional rain in the forecast is keeping most equipment off the field. Some growers are beginning to feel impatient, but the consensus is that it is still too early to be worried about modifying planting intentions or switching corn hybrids.

Patience is a virtue, and is particularly important during planting season. Ignore your social media accounts and let soil conditions determine planting date. Benefits from early planting can be easily negated by smearing and compaction at seeding.

There is a fair amount of winterkill in winter wheat fields across the region, with some providing estimates of 50% to 60% loss. Soil type and drainage, planting date, and planting depth are all important factors influencing survival. Finer-textured soils with poor drainage see the most damage, and winterkilled patches in fields often match subtle local depressions. Tile drainage lines are clearly visible in some fields.

Due to wet fall conditions in 2017, a large portion of wheat fields were seeded late in October, and continued suboptimal conditions last fall and this spring further limited growth and development.

Further, it was mentioned that some seeding was not planted deep enough and this could also have limited survival. The discussion was that the seed should be placed 1.5-2” deep and that growers should set the drill at ½ deeper to achieve this depth. Seed planted deep takes longer to emerge, but planting shallower results in poor root development and anchoring of the seeds. Ontario research has shown ideal seeding depth to be 1 inch and that the target seeding depth should range from 1.25–1.5 inch. The yield penalty from too shallow is almost always greater than the yield penalty from a deeper planting depth.

Where wheat stands have been thinned rather than killed in large patches, plant counts need to be established to make the right decision. As a rule of thumb, 7 plants/foot of row still provides 90% of yield potential. Accounting for tillers, you should count at least 25 stems/foot. Thin stands will need less nitrogen, and more weed control.

Much of the wheat crop is primarily planted for straw, so these growers might be looking for alternatives to fill patchy fields. Spring wheat is an option, but will need to be combined separately unless destined for feed.

There is much talk across the province about sulfur fertilization. Several trials are ongoing – some locally – which should hopefully shed some light on rates.

The state of alfalfa coming out of winter is looking more positive than for winter wheat, and generally better than expected. Some small depressions are looking poor and there has been some heaving, but nothing excessive. One participant noted that most “fields look tougher than they are”. Fields that were harvested or had manure applied later in the fall have suffered more.

New seedings are looking good, though they often have a significantly higher than normal percentage of grass relative to alfalfa. The alfalfa was set back by leaf hoppers and wet conditions. Some grasses also suffered winter losses, with festolonium taking hardest hit. There was some mention of overseeding forage stands with Italian ryegrass. Nitrogen fertilization can boost forage volume in grass-dominated stands, but will hurt alfalfa longevity. There was speculation that first cut this year will only yield 80% of average.

There was some discussion of forage soybeans to substitute for alfalfa. While there are more acres than in the past, a notable quotable on the topic was: “nobody wants to do it”. Those trying it are often using high heat unit varieties (2400 – 3000 CHU) and harvesting early (R6) to maintain quality. Fungicide treatment for white mold is expected to be necessary given the lush canopy growth. These growers are using forage soybeans in a three-way mix with corn silage and haylage.

Leaf hoppers were a big problem for many last year. This was surprising to most, as they are generally thought to be more of a problem in drier years. It is near impossible to predict leaf hopper pressure, as they are carried to our fields with storms from the South.

Intended spring cereal acres are higher than previous years, and several people speculated this was largely attributable to the demand for straw.

Very few of the winterkilled winter wheat acres are expected to go to spring wheat. Seed supply for some of the spring wheat varieties is low.

Planting intentions remain steady. Some have heard talk of switching hybrids, but the consensus was that it is still too early for that kind of talk yet. Seed supply is not an issue.

There was some discussion on western bean cutworm, with most expecting to see significant spraying this year. Peak flight was around August 12th in 2017, but it was noted that serious scouting should start by July 25th. Note that peak flight does not mean it’s time to spray right away. See here for information on managing WBC and associated mycotoxins in corn.

Not much was said about soybeans yet. It was noted that there seems to be less interest or emphasis on dicamba-tolerant varieties in Eastern Ontario relative to the Southwest. This led to some discussion on glyphosate-resistant weeds, particularly fleabane, and the opinion that it’s time to be thinking about weed control.

IP soybean acres are expected to be roughly equal to 2017.

It was mentioned that supplies of rhizobial inoculant were somewhat low.

Several people mentioned the recent news from elsewhere regarding regulation of neonicotinoid seed treatment. The European Union Friday approved a ban on outdoor use, and Quebec will be requiring a recommendation by a professional agronomist supported by trap data, effective September of this year. Many growers have already converted to alternative seed treatment products.

Atrazine is also being limited in Quebec, as well as in some US states.

MANIPULATOR®, a plant growth regulator (PGR), received it’s MRL for the USA. Demand for this product has been strong in the prairies for wheat, which has taken up most of the supply available in Canada.

In the major corn-producing states, the USDA reports 17% of intended acres have been planted, down 15 points from the same time in 2017, and 10 points lower than the 5-year average.

Soybean acres are 5% planted, down 4 points from last year but matching the 5-year average.

Spring wheat is 10% planted, down 20 and 26 points from last year and average, respectively.

Winter wheat condition south of the border is 33% good to excellent, 37% poor to very poor, and 30% fair, significantly worse than last year.

Insured acreage continues to increase across the province. As of April 27th, there have been 15 damage reports for winter wheat in Ottawa, Prescott-Russell, Renfrew, and SDG, out of 105 total for the province. There has been one damage report for winterkilled new forage seeding in SDG, though there are likely to be more.

According to Agricorp, there is increasing interest in forage rainfall insurance east of Toronto.

(Thanks to Wendell Joyce, Agricorp Regional Manager for Eastern Ontario, for submitting this information.)

Applications for the first intake of the Canadian Agricultural Partnership (CAP) program are due by May 8th, 2018 at 5:00 p.m. EST. See here for more information.