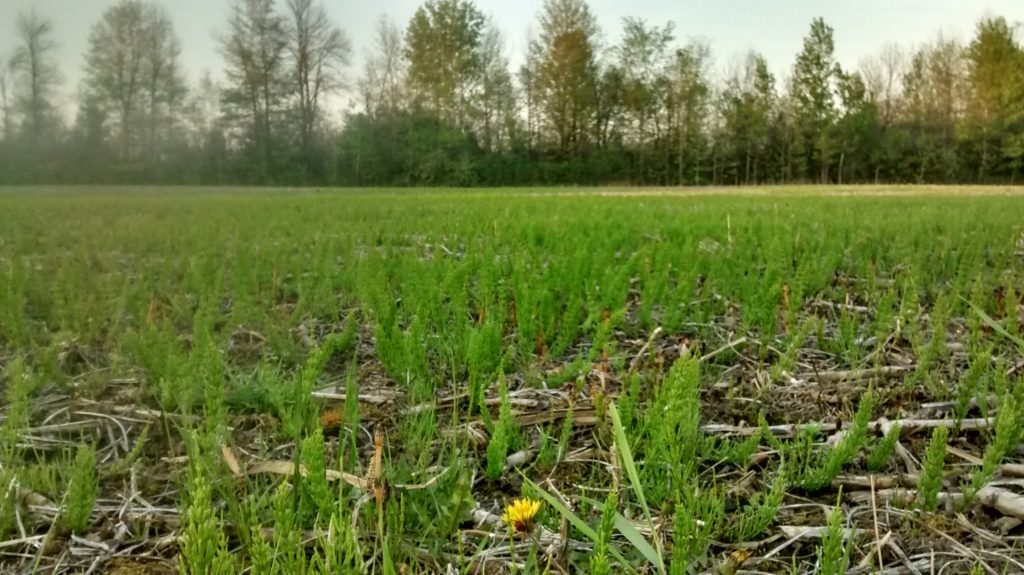 The weather in the past week has being great for planting. Crop heat unit accumulation from the 1st of May are about 200 as of the 15th of May as compared to the normal of 150 (Ottawa airport). Some areas had a light frosts this past Friday and Saturday. Where the fields were left uneven last fall, the soils are working up lumpy requiring more secondary tillage. Smoother fields were fine with a shallow, light working.

Several alfalfa fields are looking thin. Stands with some grasses are looking better, especially where fertility was applied this spring. The recent heat is bringing on the alfalfa. The grass maturity is advancing faster than the alfalfa for this time of year. Last year’s late harvest conditions made for more compaction and weaker stands, and really good hay fields in eastern Ontario are hard to find. Better stands can be found south of highway 43 and east in the St. Isidore to Crysler area on the lighter ground.

The last of the nitrogen is going on now. Early fungicide applications are also going on. Some stands are still growing slowly. The nice corn planting conditions will convince a few growers to take wheat out to plant corn. Of the winterkilled winter wheat fields, most have been planted to corn. A few growers have filled the patches with spring wheat, particularly those who had spring wheat in their plans already. Some of the wheat ground has been “planted green” to soybeans, with the intention to spray off the winter wheat immediately following planting.

Slight increase in interest in growing barley than in the past, mostly for feed. Early planted spring wheat has emerged nicely thanks to timely rains after planting.

Planted acreage ranges from 60% to 90 % with most of the acreage planted north of 43 highway. Planting was delayed because the clay soils were slow to dry, and some growers are taking advantage of dry conditions to spread manure first before planting corn. A reminder to adjust planters deeper to ensure proper moisture as the soils continue to dry out. Non-GMO contracts are full for 2018. Ingredion Canada Corporation is now starting to contract for 2019.

About 10 to 30% of the soybean acres have been planted as of the 15th. This figure increases up to 50% in the eastern part of the region.

IP interest seems to be waning, and some who have grown it in the past have abandoned. This was attributed to lower premiums, and to competition from increased acres in the U.S. It was generally agreed that those who have been planting bin-run IP soybeans for many years are missing out on advances in genetics that are available with newer, more productive varieties. Some put the figure at up to 10 bushels between older and currently-available genetics.

There were no market updates at the meeting. South of the border, the USDA reports that 62% of corn has been planted and 28% has emerged, on par with the average for recent years.

For soybeans, the numbers are 35% and 10% for planted acres and emergence, respectively, higher than average for this time of year.

Horsetail control and suppression is still an issue in some fields. Some reported using MCPA or Broadstrike pre-emergence. It’s “not perfect, but the best we have”. There seems to be somewhat better control once horsetail has emerged. Caution, MCPA can be hard on corn.

This year, the station has several trials on herbicides, fungicides and spring cereals. The OCCC (Ontario Cereal Crop Committee) barley trial has several malting varieties in it this year.

Holly Byker is looking for fleabane in wheat fields for a weed control trial. If you have a potential site, you can contact Holly at: hbyker@uoguelph.ca or 613-340-7625.

There is significant increase in the use of ammonium sulfate with urea or other nitrogen products. Good response to the sulphur is reported in cereals. Differences are less visible in corn. Field rates range from 4-18 pounds per acre (lbs/ac) actual sulphur; with 8-10 lbs/ac being the most common. Higher sulphur rates have been used on hard red winter wheat, for protein.

In corn, about 40% of the acres and up to 75% of the acres in some areas are split applying the nitrogen (sidedress or late-applied) in corn. Most are on the sandy soils, fewer on the heavier soils and high organic matter ground. Much depends on weather conditions allowing timely application. Those who can’t get in on time often have to switch from knifing UAN or anhydrous to spreader spinners.

Paul Sullivan has a project with Effigis to evaluate “Scan – the optimum nitrogen rate calculator” that was develop by Dr. Nicholas Tremblay, Agriculture and Agri-Food Canada, to adjust nitrogen rates based on the expected soil nitrogen supply as modelled by this program, which incorporates variables such as rainfall quantity and timing.

Work at CFIA is ongoing to use facial recognition software to distinguish between tall waterhemp and palmer amaranth seeds.

Final planting deadlines for 2018 are listed below. Area B encompasses most of eastern Ontario south of Arnprior. The rest of Renfrew County falls under area D.Area B:

For additional dates, check this link.