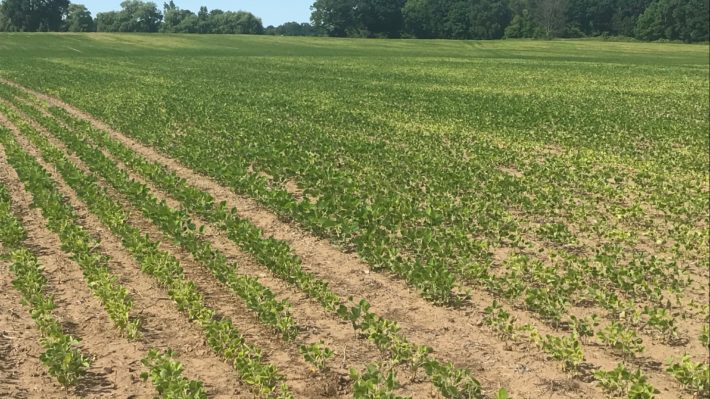 In general and across much of Ontario major grain crops and forages are progressing well. Needed relief came to many crops over the period June 22-24 and again June 27th. Prior to this there was evidence of moisture stress on various crops, especially on light textured soils. While typical of much of the rain we experienced these last few seasons, the amounts varied tremendously from zero  to well over 6 inches in the area west of London. Where rainfall was received, even small amounts can do an amazing job of feeding the crops. For many areas this sets the crops up for the forecasted extended hot/humid period over the Canada Day long weekend.

It seems every year farmers are anxious over rainfall throughout the spring but especially at this important timing in many of our crops growth cycle. As farmers plant more acres further from home base, it’s important to know what the rainfall is doing across the area. If not already connected, be aware of the Community Collaborative Rain, Hail and Snow Network (CoCoRaHS), Agricorp and various crop advisor weather network stations. They can be accessed through the various service deliverers and at these websites:

Corn in general is doing very well across most of the province. On lighter soils and to north and west where rainfall has continued to be low, some moisture stress symptoms have started to appear (“onion leafing”) as crop rows fill and water demands of the crop start to increase. There should be very rapid growth of corn height over the next week with the heat and moisture. This also marks the period of rapid nitrogen uptake by the corn crop. With the exception of some local areas which have received multiple heavy rainfall events, drier conditions suggest N losses this spring are likely low. While there are about 3 planting date windows for corn across the province based on the earlier spring weather and soil conditions, all are doing well. Early planted corn in some fields is chest high already and most of the crop will surpass knee high by the 1st of July.

Disease and insect pressure has been low. There have been reports of thrips in some of the drier areas giving concern to producers. Rain has helped most fields grow out of the infestations. No thresholds exist but control would only be warranted in fields where dry conditions remain, plants show signs of stress and thrips continue to infest even new leaves on the plants.

Soybeans have now started to flower except for late planted fields. Despite some areas getting more rainfall than needed creating concern over white mold, the high forecasted temperatures will prevent it from developing, as long as temperatures remain above 28˚C. Fungal sporulation is greatly reduced under hot temperatures regardless of the amount of moisture present. For fields with a history of severe white mould, a two pass foliar fungicide strategy should be considered. The first application needs be made relatively early during the reproductive growth stages (before full flower) following by a second application 14 days later.

Soybean cyst nematode symptoms are showing in many parts of southwestern Ontario and will as well in central and Eastern Ontario over the next few weeks. Above ground plant symptoms include yellow patches, stunted plants (Figure 1) which could resemble herbicide, pH, fertility deficiencies, etc. Dig up plants (don’t pull) and examine roots for cysts (Figure 2). 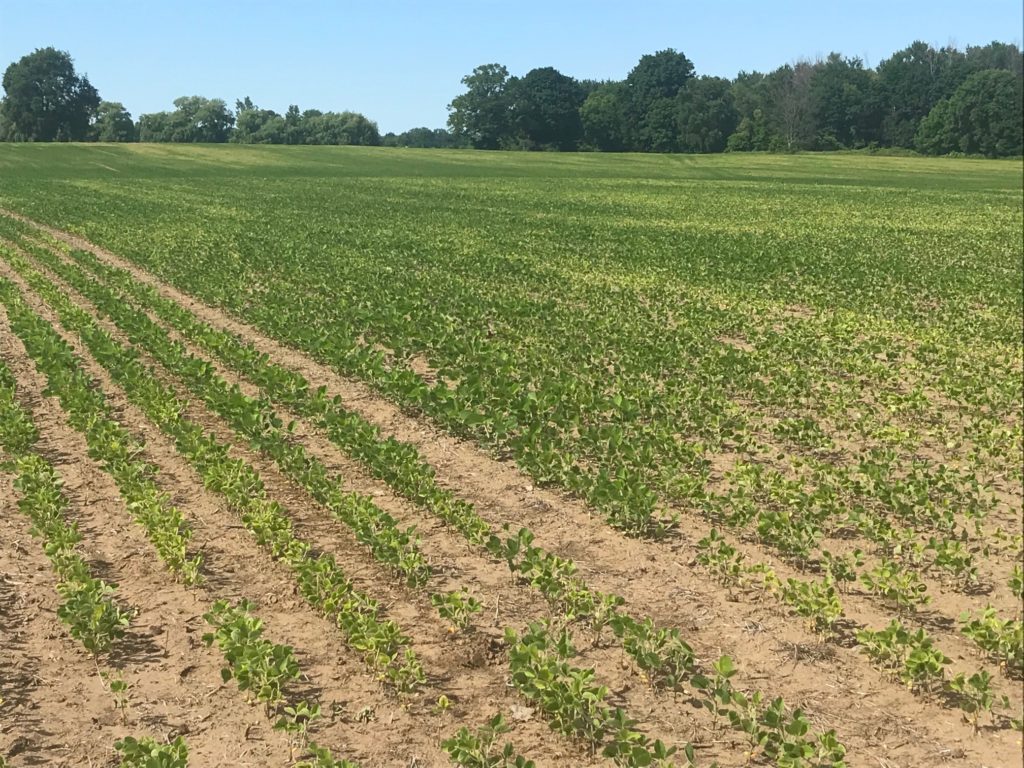 Figure 1. Symptoms of SCN injury that may be confused with fertility or herbicide injury. 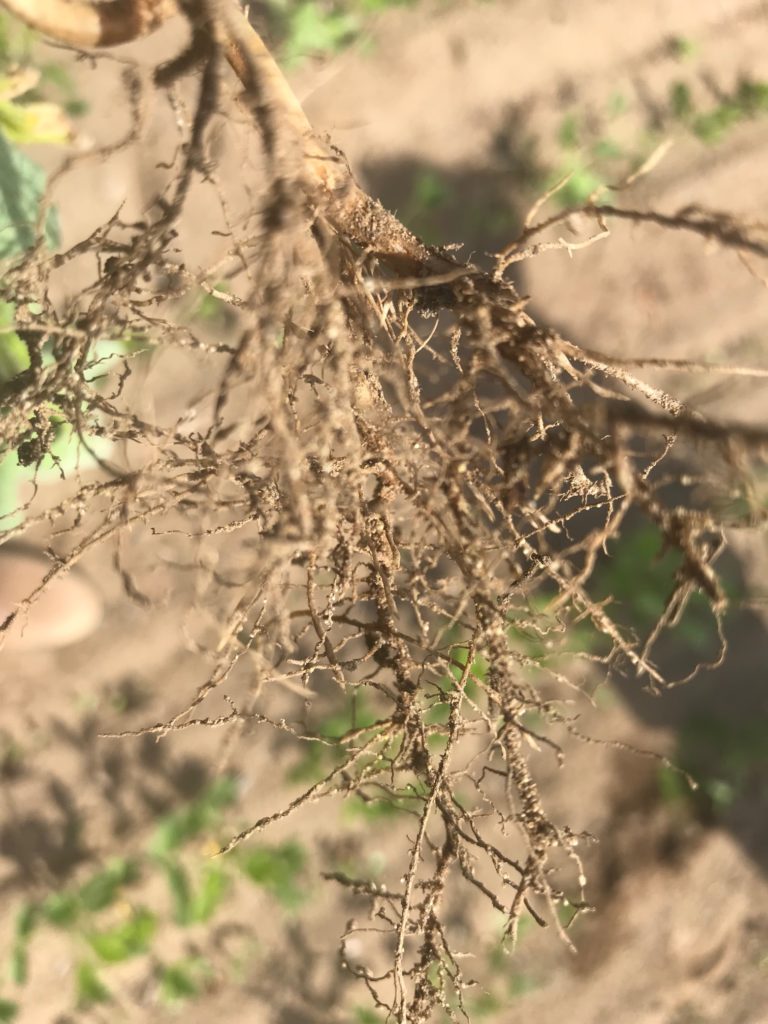 Aphids have not been reported in any significant numbers although some have been found in the Milverton area, so scouting will now be necessary to monitor numbers. Fields should be monitored once the crop is in the R stages of soybeans and only require protection if soybean aphid thresholds are reached. See Field Crop News for more information (Soybean Aphid Thresholds).

Lots of variation in colour across the province since crop in the southwest is maturing rapidly with harvest anticipated to start then as soon as the first week of July. The rain that was received was very important to grain fill and providing for maturity to occur as expected. Prior to the onset of recent rains, some crops on lighter soils did have potential yield impacting moisture stress which may be seen in the combine.

The rains have brought on some disease but it is too close to harvest to apply any management control and the infestation level remains relatively low.

Significant acreage saw cereal leaf beetle but it appears there will be minimal impact on yield. .

The conditions are still dry despite recent rains. This means the potential for field fires is considered high. Everyone should be ensuring equipment is well maintained, clean, and being very observant. Keep looking behind; don’t get to the end of 1500-2000 ft. field and turn around to face a wall of fire. Rapid response to a field fire rapidly is key. Don’t park pickups and other vehicles with low clearance in the stubble.

The crop has struggled with the delayed planting and dry conditions during its early growth stages. There are reports of armyworm (Essex County) so producers should be scouting their fields. There is still a window for control, but watch the days to harvest on pesticide labels.

There will likely be some added stress put on the spring cereal crop if it heads out in the next few days under the very high forecasted temperatures. Adequate soil moisture or rain from thunderstorms will help to mitigate this to some degree.

A lot of canola is planted in areas that are dry and the crop is stressed going into flowering. The more southern areas seem to have adequate moisture, but Bruce, Grey, Simcoe and further north are the areas to watch.

The vast majority are planted. Planting done late May/early June are at about first trifoliate. More of the crop was planted later as producers waited for some moisture that didn’t come before they decided to seed. Much of the area has now received rainfall which has aided emergence.

The early harvested first cut has been quite slow to regrow because of the dry conditions. The recent rains and anticipated heat will see that growth rebound rapidly next week. Much of the non-dairy hay has now been harvested under decent conditions leading to satisfactory yields and good quality. 2nd cut on the early fields will likely happen this coming week.

Concerns for alfalfa weevil on the 2nd crop for the most part did not develop. It’s expected that they are currently pupating and will likely be controlled by the next cutting. 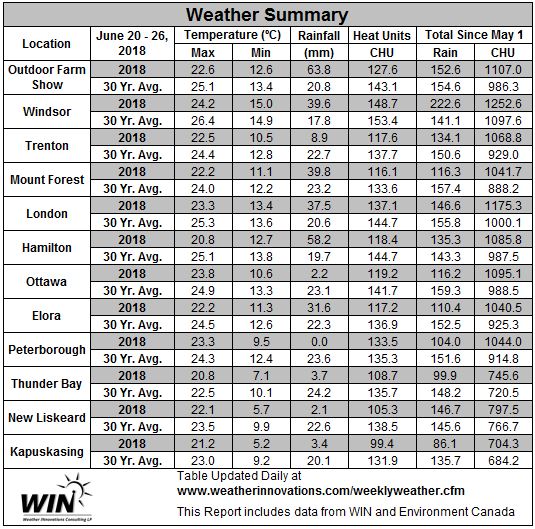