Thank you to Brian Wooley and Syngenta for sponsoring breakfast.

This was the last meeting for the season.  Thank you to all participants for your input.

High winds, hail and pounding rain in some of the area over the past week has added frustration to an already difficult spring seeding season.  A category F2 tornado with maximum wind speeds of 180 km/hr along with significant hail cut a path about 30 km and up to ½ km wide from the Norwich to Fisherville area. Thunderstorms (and hail) Wednesday June 13 and Monday June 18 brought “the million dollar rain” for many producers with anywhere from 0 to 90 mm of precipitation.  Pounding rains caused significant soil erosion and crusting in some newly planted fields.  Soil health and infiltration capacity differences between neighbouring fields was evident in surface runoff.  Conditions remain dry in much of the region and additional “gentle” rainfalls would be welcomed.

June 30th is the deadline to report unseeded acres, and June 30th to report seeded acres to Agricorp.  Reporting online is encouraged.  Fields planted after this date will not be eligible for production insurance.

There are more bare soybean fields than uniform fully emerged fields in Haldimand and on the heavy-textured soils.  Soybean planting and re-planting continues as conditions allow. Soils are still “gummy” below the surface and where beans have been in the ground for 2 weeks, some seed corn maggot damage is also occurring.  Replanting due to hail damage is also occurring.  Bruising damage is evident at the base of the stem from “sideways hail”.  Soybean plants with hail damage will survive if the hypocotyl remains intact.  Growers are encouraged to leave any stand with greater than 50% of population and with relatively uniform distribution.

Weed control is variable, depending on where there was enough rainfall to activate herbicides.  A few fields have not had any herbicide applied.  Some stands have fleabane that is too advanced for control.  Application of dicamba was considered to be at peak risk for drift and/or volatilization.

Fungicide application at R1, R2 stage will likely occur July 5-10.  For white mould control, the disease entry is at the flower point.  Once the mould is visible on the plants, control is too late.  Watch fields that had significant white mould damage in 2014.  Thick healthy stands combined with moisture have the highest risk of infection.

Corn planting is complete. Not all the acres intended for corn were planted to corn in heavy-textured soils.  Early planted corn is at the 8 leaf growth stage and most stands look good.  Early planted corn looks more uniform than later planted corn, where variable soil moisture or spring compaction resulted in greater variability. Some corn on sandy soils where rainfall has been limited are showing some signs of moisture stress.  Nitrogen side-dressing is occurring on later planted fields.  Rapid growth, high and fluctuating temperatures have continued to result in some visible herbicide injury.

Much of the winter wheat crop appears to have good yield potential.  Dry areas such as knolls are shutting down.  Disease pressure remains low.  High daytime temperatures followed by single digit night temperatures have resulted in some “kinking” in wheat heads, but no yield impact is expected.

Cereal leaf beetle have been observed in oats being grown for cover crop seed.  Scouting should occur for control if they reach threshold levels.  Click HERE for more information on cereal leaf beetle thresholds.

Recent rainfall has helped regrowth on 1st cut fields.  Yields and quality from 1st cut were above average.  Manure application is occurring to many just-harvested fields.  Sampling to determine the amount of P and K applied is recommended.   Priaxor trial data initial results indicate yield and quality advantages for alfalfa fields where the fungicide was applied.  Slow growth due to dry conditions in most hay fields suggests there would be little expected advantage to applying a fungicide ahead of 2nd cut, especially since the fungicide must be applied at least 3 weeks before cutting.

Residual herbicides that were applied 3 weeks ago and where the weather has stayed dry have now had rain, but not enough to control some of the weeds.  Some re-spraying will be required.

Glyphosate resistant waterhemp has been identified in Haldimand.  Discussion about control of Roundup Resistant waterhemp emphasized the importance of scouting and identifying any weeds that seem to escape herbicide application.  Managing glyphosate resistant fleabane may have been good practice for managing waterhemp.  Waterhemp is very prolific and germinates all season long in soil temperatures between 8 and 30oC and may be resistant to a multiple herbicide modes of action.  Crop canopy closure will be important in controlling the weed. The photos below (courtesy of Johanna Lindeboom – Clark Agri-Service) illustrate the weed growth stages where herbicide control is effective and in-effective.

The first two images show the growth stages that should be targetted for controlling with herbicides. If herbicide resistance is suspected samples can be sent to the University of Guelph. 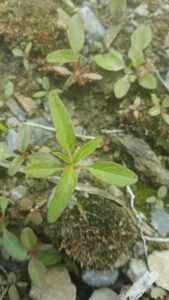 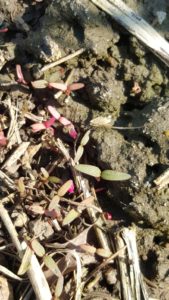 At the later growth stages shown in the images below, herbicide application is unlikely to provide adequate control. 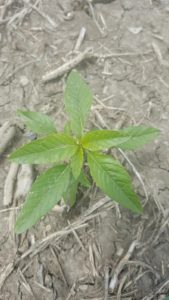 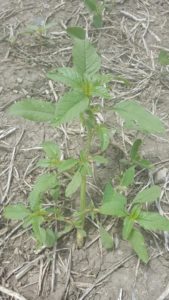