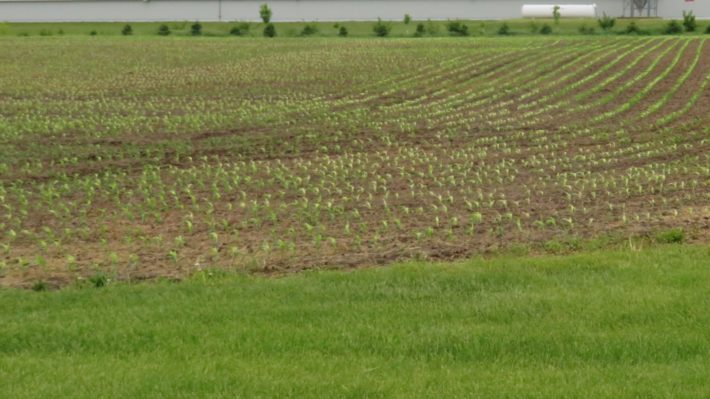 Thank you to Ken Currah and BASF for sponsoring breakfast.

There will be one more breakfast meeting in Simcoe on June 20th.

There was significant rainfall on Friday, June 1st in many areas, and even more rain on Sunday and Monday. Some areas had as much as 3 or 4” on Friday. The amount of rainfall was highly variable, even from one road to the next. One grower reported that their fields not far from each other had rainfall ranging from zero to 2”. There has been a lot of progress in planting, but there are fields that growers are still not able to get onto. The forecast at this time is calling for more rain on the weekend.

June 15th is the deadline to report unseeded acres, and June 30th to report seeded acres to Agricorp. Reporting online is encouraged.

Emerged soybeans look good across the region, and earlier planted fields are at the 2nd trifoliate growth stage. There have been a few fields replanted, in some cases because of shallow planting. Emergence appears to be a little slower this week with cooler temperatures, compared to emergence in less than a week in earlier planted fields. There are still fields that have not been dry enough to plant yet, particularly from Wellandport to Niagara, although Haldimand and Niagara counties are making progress. Agronomists at the meeting agreed that soybean growers should not switch to shorter season soybean varieties for late plantings, because the plants do not produce enough vegetative growth and set pods low to the ground.

Weed control in IP soybeans is variable, depending on where there was enough rainfall to activate herbicides. Fields that did not receive a pre-emergence herbicide are very weedy and will need in-crop herbicide applications. Agronomists expect to be communicating the risks associated with post-emergent applications of dicamba in the coming weeks. There are many crops in this region that are very sensitive to dicamba if there is drift or volatilization. Options for controlling glyphosate resistant Canada fleabane post-emergence aside from dicamba are very limited. On-farm trials in the region this spring are showing that seeding cereal rye as a cover crop in the fall can reduce the size of fleabane in the spring.

Most corn is planted, but again there are areas that have not yet had a chance to dry out. It was noted that on the heavy clay soils, despite drying out on the surface, this year has been particularly challenging with soils remaining gummy underneath. Growers are now switching to shorter season hybrids. Corn that is not yet planted will have about 250 heat units less than what is already emerged.

Early planted corn is at the 7 leaf growth stage and most stands look good. Growth has been very fast with the heat in past weeks, and rapid growth syndrome is evident in a few fields. Nitrogen has already been side-dressed last week in much of the earlier planted corn and more will be applied as soon as possible.

The heat in the past couple of weeks was a bit extreme for applying herbicides. Herbicide injury can be found in some fields, particularly where there are sprayer overlaps or in corners of the field. For some growers, the corn has emerged faster than expected and they have seen injury with pre-emergent herbicides or have had to change their herbicide plans.

Much of the winter wheat crop appears to have good yield potential. Fields that were planted 2 to 3 weeks apart in the fall are now only 2 to 3 days different in maturity, although late planted fields are much more variable. The crop is fairly short so it is expected there will not be a lot of straw. It was noted that fields underseeded to red clover have had good clover emergence.

Fungicides at the T3 timing for fusarium control have been going on the earlier planted crop already, and later planted fields will receive fungicide later in the week. Fortunately most fields are not too wet, and will not require aerial application of fungicides.

First cut has been taken or is being finished up now on most fields. Anecdotally, trials with Priaxor look promising and have resulted in retention of lower leaves and a decrease in leaf spot. The degree of improvement in the alfalafa is somewhat variable, and it has been noted that there is not much advantage applying Priaxor to older stands. The fungicide must be applied at least 3 weeks before cutting to see the most obvious improvements.

There is a lot of asparagus available so some are opting not to harvest part of their crop. Strawberries picking has begun, and most transplanted vegetable crops are planted. Tobacco has been planted. There are some hemp fields in the region as well.