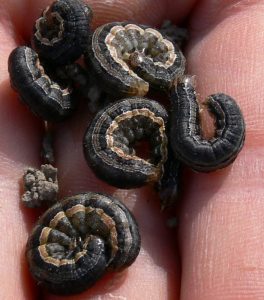 Armyworm has been spotted at low levels in a few winter wheat fields, though being so close to harvest, it is really not a concern in that crop. However, it does indicate a need to keep an eye out for them in spring cereals, as well as mixed forages (as they like to feed on grasses). True armyworm larvae can vary in colour from green to reddish-brown but all have white-bordered stripes running laterally along the body. True armyworm also have dark diagonal bands at the top of each abdominal proleg and a yellowish-brown head with a network of dark-brown lines creating a mottled pattern.

Scouting Guidelines: Scout every 4 days to stay ahead of any potential invasions. The best time to scout for true armyworm is shortly after dusk when larvae are actively feeding.  In cereals and mixed forages, examine 10 areas of the field, assessing the number of larvae per 30 cm x 30 cm (1 ft2).  Pay particular attention to the border area directly adjacent to other grassy host crops. During the day, if it is cloudy and overcast, you might be lucky enough to see larvae on the head of the plant but on sunny days, they will be down on the ground among the crop debris or under soil clods. Brown frass may also be present on the plants and on the soil surface. Birds diving into your field is a good indication that there are good eats there so take a look. 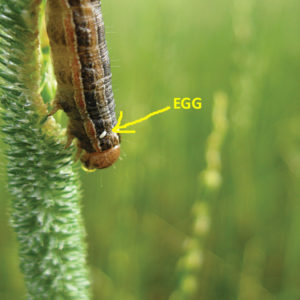 When you do find larvae,  look for any white eggs that may be attached to the backs of the armyworm larvae. This is a sign that the larvae have been parasitized by one of its parasites which have done the job for you. Avoid treating with insecticides when large numbers of parasitized larvae are present as they have already been controlled by parasitoids or when larvae are close to 2.5 cm in length, as insecticides will no longer be effective and the larvae will soon stop feeding.