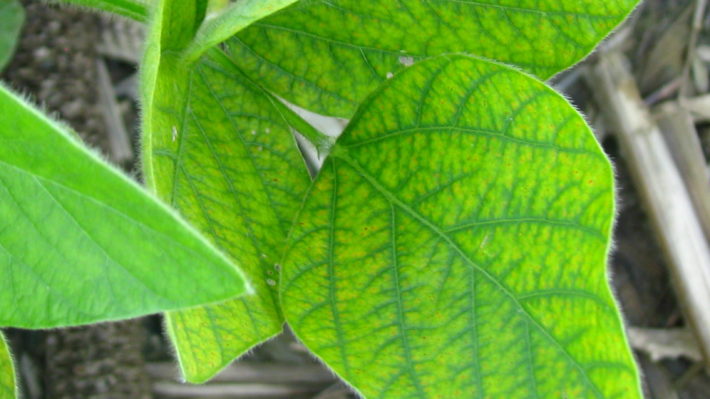 Most fields are now in the R2 (full flower) to R3 (beginning pod) growth stage. Vegetative growth has been highly dependent on the amount of rainfall in a given region and the planting date. Moisture stress and leaf yellowing is evident in many parts of the province. Late planted fields with poor stands are suffering the most as roots have not been able to access moisture deeper in the soil profile.  Exposed soil also allows for more water evaporation. Soybeans flower over an extended period of time (4-5 weeks) giving the crop the capacity to recover from early season moisture stress. Large yield losses do not generally occur unless moisture stress continues into the R4 (full pod) growth stage. This is only true if adequate plant stands are present. If stands are thin, or plants are suffering from other issues, losses will occur earlier. Rainfall over the next three weeks will be crucial to seed development for those fields that have missed earlier showers. Dry conditions will amplify nutrient deficiency symptoms, insect feeding, and disease symptoms. When plants are already stressed it’s even more important to manage deficiencies wherever possible. For more information, please go to the adverse weather webpage.

To date spider mite damage has been limited to a few areas, but field scouting will be important as damage is most severe during dry growing seasons. Mites feed on individual plant cells from the underside of leaves leaving stipples. Severe stippling causes yellowing, curling and bronzing of leaves. Spider mites usually start on the edge of the field but wind can carry them to any part of the field. From the road these pockets may look like moisture stress. Fields that are close to neighboring winter wheat stubble, hay fields and no-till fields are more at risk. To verify mites, take yellow leaves and put them over a white piece of paper and then shake the mites off the leaf. Small mites will be visible crawling on the paper. They are only about 1 mm in length so a hand lens may be required. Four or more mites per leaflet or one severely damaged leaf per plant prior to pod fill indicates that control is required.

There are two main reasons to consider spraying a foliar fungicide on soybeans.  The first is to suppress white mould. The second is to improve overall plant health through the control of other leaf diseases, but white mould control is not the primary concern. If a field has the potential for significant white mould, 2 applications of a fungicide is the best strategy. This is gauged by previous field history and the weather. If a field has had significant white mould pressure in the last 10 years and conditions are favourable for white mould, foliar fungicides have proven to be effective. The first applications needs to made relatively early during the reproduction growth stages (R1.5) followed up by a second application 14 days later if weather condition are cool and wet. In the second strategy where white mould is not the primary target, one application of a foliar fungicide is usually sufficient and should be made between full flower and early pod set. (R2.5)

Potash (K) and Manganese (Mn) deficiency is widespread this year. These two nutrient deficiencies have unique leaf symptoms. K deficient leaves turn yellow along the leaf margins (Figure 1) while Mn deficient leaves turn yellow across the whole leaf except for the veins which remain green (Figure 2). Factors that limit root growth such as dry conditions and sidewall compaction will reduce K uptake. Under dry conditions roots are unable to take up K from the soil even if soil K levels are sufficient. A soil test is the only reliable way to know if a field is truly low in K or only showing stress-induced potash deficiencies. It’s also important to note that K deficiency symptoms may indicate soybean cyst nematode (SCN) feeding on the roots. When taking soil samples ask the lab to also test for SCN. It’s difficult to alleviate K deficiency now since foliar products cannot supply enough K through the leaf tissue to rectify the problem. A dry application of potash on later planted fields may still be warranted in severe cases. Yield response will depend on the amount of rainfall after application. Figure 1. Yellowing in leaves along the leaf margins due to K deficiency Figure 2. Yellowing in leaves across the whole leaf due to Mn deficiency

Symptoms of Mn deficiency are interveinal chlorosis (yellowing) while the leaf veins remain green. Mn symptoms will generally appear on the younger leaves first. One of the most significant factors affecting the availability of Mn is the soil pH. As soil pH increases less Mn is available to the plant. Deficiencies can also appear on eroded knolls where the pH is higher than the rest of the field. The deficiency is most common on poorly-drained soils, especially clays and silt loams. High organic matter also ties up Mn. Manganese is less soluble in well-aerated soils; and is the reason why in compacted areas (wheel tracks) a dark green colour may remain while the rest of the field becomes symptomatic. A foliar application of Mn works well to rectify the deficiency and can provide a 5 to 8 bu/ac yield response in severe cases. 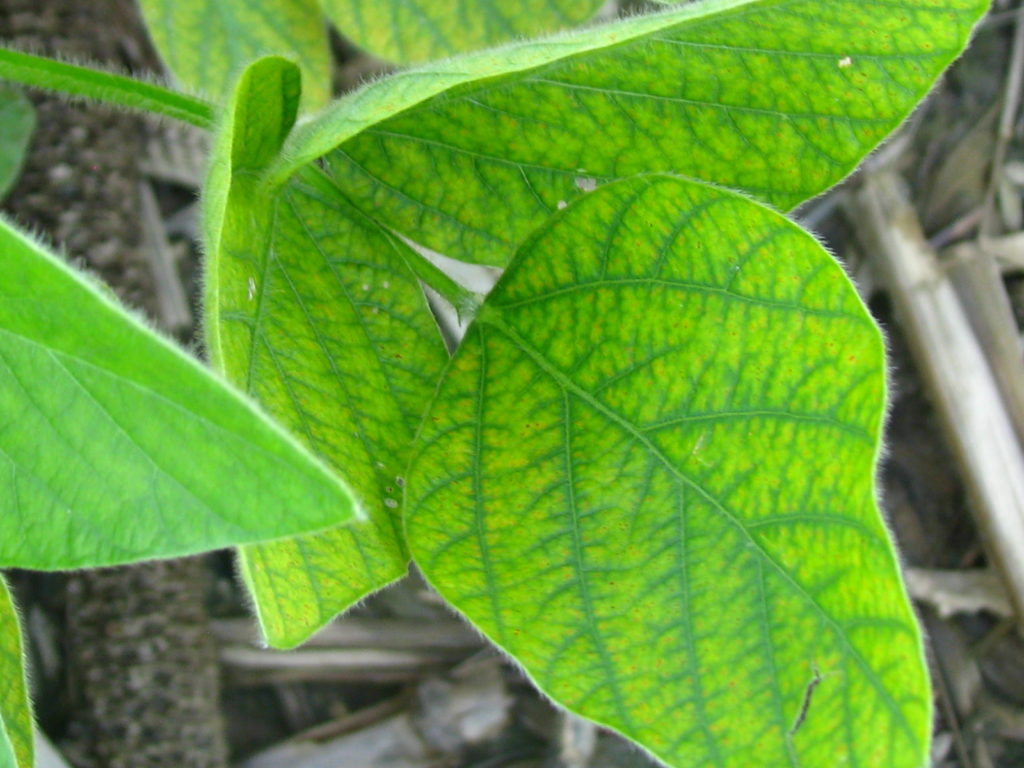