This is a year of Stranger Things.  Some insect pests that are expected in these conditions haven’t shown up yet while others are much more ahead of schedule, thanks to the hot days that are resulting in significant growing degree day accumulation. 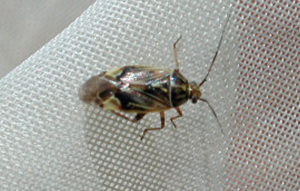 Tarnished plant bug is already being found in dry beans, even though the crop is just in early flowering stages.  Not every field has them but enough reports have come in to warrant scouting, based on the numbers that some are finding.

Tarnished plant bug (TPB) adults are small (approx. 5 mm in length) and mottled in yellowish-to-reddish-brown colours with a distinct small triangle on their backs. The nymph stage does not have the triangle yet but are yellowish-green and wingless, often being confused for aphids without the tailpipes. Older nymphs develop four small black dots on the thorax and one on the abdomen.

Both the adults and older nymphs pierce into plant tissue, injecting saliva that breaks down the tissue and causes malformation at the injection point. Feeding on flowers can cause flower abortion. Feeding during pod stages results in scarring, malformation and dimpling or pitting of the pods. Sap may ooze from the feeding sites on the pods, which increases the risk of pod disease development. TPB can also drill directly into the seed, causing pick and reducing seed quality.

Monitor fields weekly during flowering to the early-pod and seed-filling stages. Pay particular attention after neighbouring alfalfa fields have been cut. TPB prefer pigweed in flower, which can be used as a monitoring tool to help indicate when TPB are present in and around the field. Border rows are apt to have heavier infestations, so make sure to assess several areas of the field to get a good indication of the overall pressure.

Threshold:  One bug or more per plant at first flower to early pod stages warrant a spray.  If populations don’t reached threshold until pods are present, then the spray timing might also coincide with when western bean cutworm requires control.

Control Options:  Insecticides registered for TPB on edible beans can be found in the Field Crop Protection Guide on page 168: http://www.omafra.gov.on.ca/english/crops/pub812/pub812ch5.pdf    If timing can be pushed until at least pods are present, then consider insecticides that can also provide protection against western bean cutworm.