In 2018 there was an increase in spring canola acreage in Ontario compared to the previous two years. Insured acres totaled approximately 30,000 ac in 2016 and 2017, whereas there was nearly 40,000 ac insured by Agricorp in 2018. Canola acreage increased across many regions, but the most notable increase was the jump from approximately 8,000 ac in Temiskaming in 2017 to nearly 13,000 ac in 2018. Rainy River and Thunder Bay also saw an increase in acres with 3,064 ac grown across the two regions combined. There were modest increases in acreage in Grey, Bruce, Huron, and Dufferin and modest decreases in acreage in Nipissing and Wellington compared to 2017.

April was cold and rainy and there was an ice storm mid-month, leaving fields wet through the ideal timing for planting canola. In the last week of April, about eight inches of snow fell in Temiskaming with rain continuing into May. There were very few reports of canola being planted before May 5th in Ontario. The majority of canola was planted in the middle of May, although more rain fell during the Victoria Day long weekend. Planting before mid-May is ideal in terms of avoiding swede midge damage and avoiding hot temperatures during flowering.

May was quite wet, but June and July were relatively dry in many canola growing regions. Northern parts of Grey, Bruce and Huron counties had some of the driest conditions. Some areas did not receive any rain in the month of June. Conditions were also quite hot. Temperatures above 28˚C can cause flower and pod abortion (Figure 1), particularly if moisture is limited and nighttime temperatures are above 16 ˚C. Canola is vulnerable to heat stress from the green bud stage through to one week after flowers open. The combination of high heat and moisture stress caused significant yield loss in some areas, particularly where fields were planted early on sandy soils. Some fields bolted (stem elongation) before there was row closure where moisture was very limited. Plants did not branch very much under hot, dry conditions, and bud clusters contained fewer flower buds than normal (Figure 2). 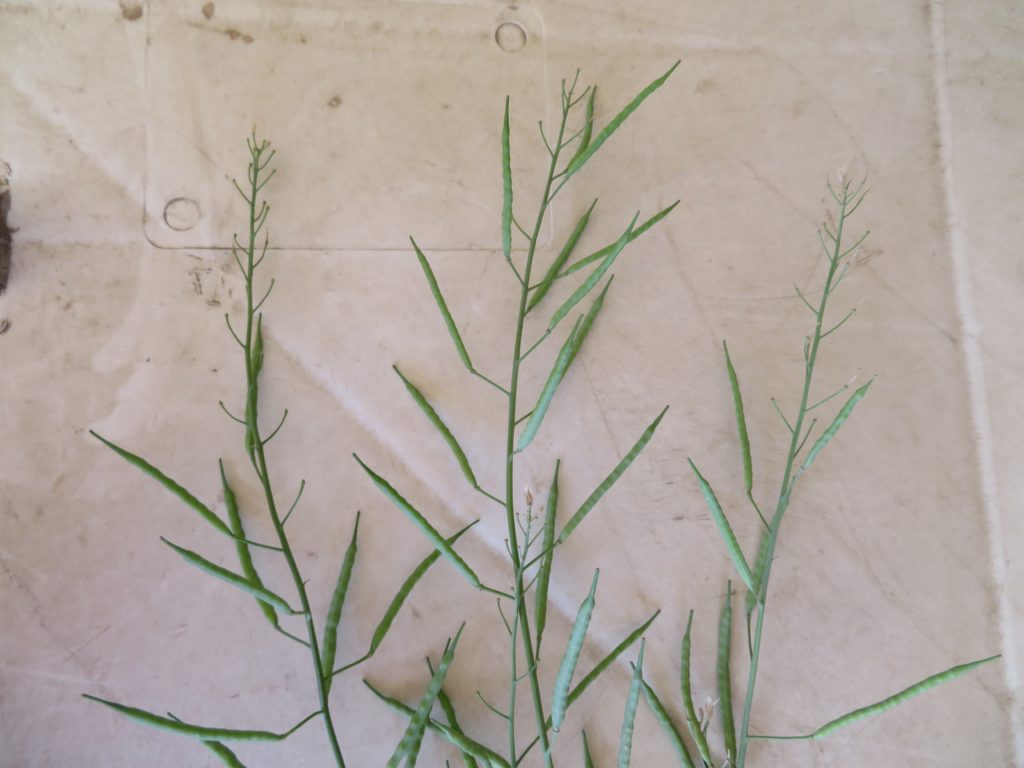 Figure 1. Hot, dry conditions cause abortion of flowers and buds, reducing the number of pods per plant. 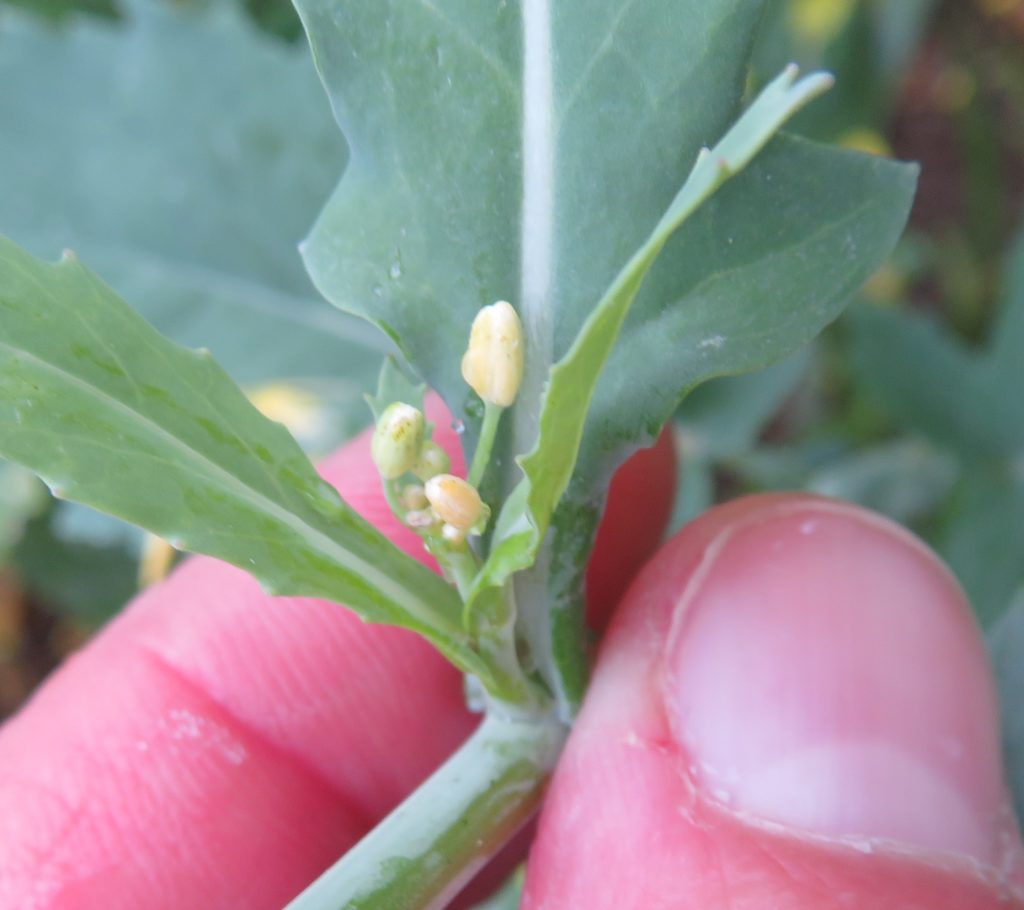 Figure 2. Secondary bud cluster observed to have very limited number of buds because of moisture stress.

Flea beetles were active in June, but pressure was generally low. In most regions an insecticide application was not necessary, although there were some reports of re-seeding following flea beetle feeding. Flea beetles were also observed at the end of the season. Thresholds are not established for late-season flea beetle but feeding on leaves and pods should not negatively impact yield after seeds in lower pods have turned green. Damage is not likely to be an economic concern at fewer than 50 flea beetles per plant.

It is difficult to report on the level of swede midge pressure in 2018 because few producers and agronomists are using pheromone traps to monitor for the pest. Swede midge first emerged at the Elora research station on May 27th, and similar emergence dates were reported from Temiskaming District and Dufferin County. Populations were low through the first two weeks of June, so spraying an insecticide in response to swede midge reaching threshold was limited. Later-planted fields were in the susceptible growth stages (one leaf through green bud) through June so insecticide applications were made up to the end of the month where thresholds were reached.

Significant losses to swede midge are certainly not a thing of the past. Yield loss was reported on a few fields in 2018, particularly in Temiskaming District. Swede midge damage causing reduced branching was frequently observed in fields through eastern and northern Ontario.

Synopeas myles is a beneficial parasitoid that lays its eggs inside swede midge larvae. The parasitoid has now been found at varying levels in all canola-growing regions of the province and may be suppressing the swede midge populations in some fields. Research is continuing at the University of Guelph on the distribution and abundance of Synopeas myles, as well as the factors affecting parasitism rates and susceptibility to insecticides.

Diamondback moth larvae move into the province through weather events in some years and were found in mid-July in Temiskiming District and Grey County. In some fields an insecticide application was warranted. Diamondback moth larvae are green with a forked hind end and may been found in a netting of silks on canola leaves (Figure 3). The larvae feed on leaves until the leaves are gone, then feed on pods which can lead to shattering. 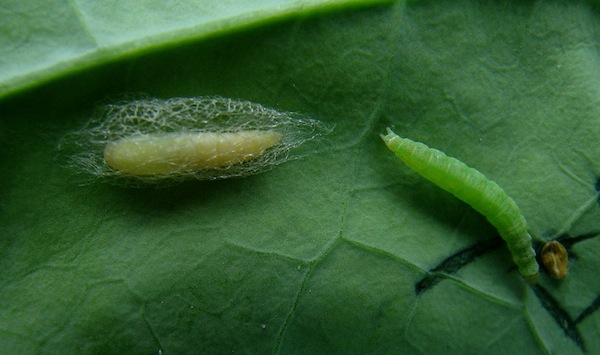 It is important to use the appropriate scouting methods when assessing diamondback moth larvae pressure. The threshold is 20 to 30 larvae/ft2 (not per plant), so it is best to pull out plants within a square foot and beat them on a drop cloth or hood of a car and count the larvae. Avoid using a sweep net, because it is likely that an alarmingly high number of larvae will be found in the net even if threshold has not been reached. Spraying may be warranted if there is limited leaf tissue and many larvae are found feeding on pods.

In 2018 a few more growers found clubroot on their farms. Dry summer conditions are not conducive to high levels of clubroot infection, so producers may not have observed yield loss from clubroot this year. Clubroot poses a significant risk to canola production, and has now been confirmed in Bruce, Grey, Dufferin, Simcoe, West Nipissing, Temiskaming, Cochrane and Algoma.

It is important to prevent movement of soil from infected fields to new areas. Canola growers using custom operators for any field operations, including within other crops in the rotation – because it exists in infected soils, regardless of what crop is present – are at increased risk of having clubroot move onto their fields. Consult www.fieldcropnews.com for local information on clubroot, and www.clubroot.ca for more information about research findings and managing the disease.

Fields that were planted early or were in very dry areas were ready to harvest by the first week of August in Bruce, Grey, Dufferin and Wellington Counties. Rain in early August resulted in the delayed harvest of some fields and caused re-flowering in many areas. Much of the canola was harvested in August and September; however, a few fields in Temiskaming District were not yet harvested in early November.

Where canola was under significant moisture stress during high temperatures, such as in parts of Huron, Bruce and Grey Counties, some fields were yielding as low as 500 lb/ac. These were unfortunate circumstances, but many producers finished the canola season with strong yields. Later-planted fields and those with good moisture holding capacity were above average for many growers. Despite the extreme conditions there was only one known instance of heated seed.

Average yields reported by Agricorp for West Nipissing, Dufferin and Wellington were approximately 2600 lb/ac, followed closely by Bruce, Huron, Oxford, Perth, Algoma, Cochrane and Sudbury at just under 2500 lb/ac. Acres of canola have been increasing in Thunder Bay and Rainy River, and yields in the region were strong at approximately 2,380 lb/ac. The average yield in Temiskaming was 2,217 lb/ac. The combined regions of Simcoe, Halton, Durham, Peel and York had an average yield of 2,130 lb/ac. Grey County was low yielding on average this year, at approximately 1,690 lb/ac. Eastern Ontario was also low yielding on average; Ottawa, Renfrew, Prescott and Russell averaged approximately 1,710 lb/ac and the counties of Frontenac, Kawartha Lakes, Lennox, Addington, Northumberland and Prince Edward averaged approximately 1,210 lb/ac.

Interest in winter canola is increasing with the recent interim registration of a variety named Mercedes, and research being conducted at AAFC in Harrow. Agricorp has reported that there are approximately 1750 acres planted in 2018 and enrolled in production insurance. Fields are being monitored in the counties of Essex, Chatham-Kent, Wellington, Hamilton-Wentworth, Haldimand, and Niagara to evaluate success of the crop and provide support to producers that are new to canola. Rain throughout September resulted in the cancellation of planting intentions on some fields, and poor emergence or late planting in others. Fields that were slow to grow because of a lack of fall fertilizer, or because of wet conditions and late planting, may not be advanced enough to survive the winter. Herbicide carryover issues have also been a concern; producers are encouraged to check the re-cropping interval of herbicides used in the 2 years prior to planting canola.