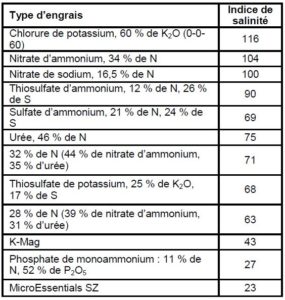 Some crops respond well to seed placed fertilizer. Applying phosphorus to wheat in-furrow has become standard practice for many growers. The amount of fertilizer that can be applied safely depends on the crop species, the type of fertilizer, the rate, soil type and soil moisture. Complete crop failures are possible if the seed or seedling is “burned” with excess fertilizer. Is there a safe rate of dry fertilizer phosphorus (P) and potassium (K) that can be applied in furrow for soybeans?

There are two ways in which commercial fertilizer may cause injury. The first is salt injury and the second is ammonia toxicity. Essentially all commercial fertilizers contain salt. As they dissolve, the salt concentration in the soil solution increases. Salt injury occurs when the amount of salt close to the seed is greater than the salt that naturally occurs in the cells of the seed. The difference in osmotic pressure causes water to move out of the seed into the soil solution, which dries out the seed. If there is significant desiccation the seed or even young plant will die. The seed or roots of damaged plants may look dark grey or black. The term fertilizer burn comes from this blackened appearance.

Salt index is a measure of the salt concentration that a fertilizer causes in the soil solution. It is calculated by comparing the increase of osmotic potential that a fertilizer produces compared to the increase in osmotic potential of sodium nitrate when added to water. The salt index of sodium nitrate is defined as 100. The salt index of a mixed fertilizer that contains N, P, and K is calculated by adding up the value from each of the components. Nitrogen, potassium, and sulphate-sulphur fertilizers have higher values than phosphorus fertilizer.

It is important to know that salt index values do not predict the amount of injury that will occur to a crop in a specific field. They just provide a relative value of one product compared to another. The salt index of some fertilizers are shown in Table 1. The amount of fertilizer that can be applied safely depends on the crop species, the type of fertilizer, the fertilizer rate, soil type and soil moisture.  For example, wheat is moderately tolerant to high salt conditions, and corn has some tolerance, while soybeans are very sensitive. 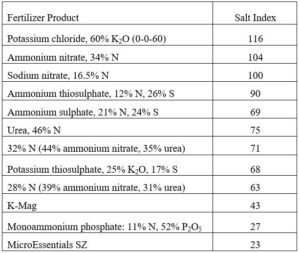 Fertilizers that produce free ammonia such as urea will also increase stress placed on the seedling, which can increase injury. Ammonia toxicity occurs as urea breaks down to ammonia. High concentrations of ammonia near germinating seed is toxic and impairs water and nutrient uptake.  Free ammonia in the soil is increased with high soil pH, low CEC, and under dry conditions. When soil moisture is high, hydrogen from water will attach to ammonia to convert it to ammonium, which reduces the potential of ammonia injury.

Is there a Safe Rate for Soybeans?

Since the amount of soil moisture is important in predicting the extent of fertilizer burn, establishing a “safe” rate for a sensitive crop such as soybeans is very difficult. It’s certainly not as simple as just picking a fertilizer with a relatively low salt index. One rainfall can make the difference between no damage and a significant stand reduction.

Figure 1 shows that during the April 23rd planting date MESZ/K-Mag did not reduce plant stands significantly. Fertilizer was placed in-furrow. However, ammonium sulphate reduced stands by about 30% and urea with the highest salt index reduced stands by over 70% (see Figure 2). From this comparison it could be argued that a salt index of 33 or lower is safe for soybeans. However, by the May 23rd planting date even the MESZ/K-Mag with a relatively low salt index caused a large plant stand reduction.  By the June 11th planting date over 70% of the plants were destroyed when using the MESZ/K-Mag mixture (see Figure 3). The urea completely decimated the stand for this planting date.

This relatively simple demonstration showed how planting date (soil moisture) can make the difference between a safe rate and a complete crop failure.

So, back to the original question: is there a safe rate for in-furrow dry fertilizer for soybeans?