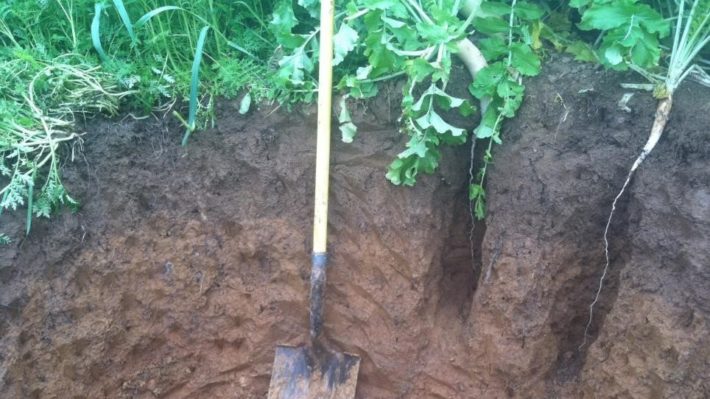 We are all aware of the imperative to minimize compaction, but with crop quality on the line, tough choices have to be made on the trade-off between the grain quality and potential income from this year’s crop, and future yield and cost of production due to compaction losses or increased tillage passes.

There have been plenty of good tips published recently on minimizing compaction at harvest, so they won’t be re-hashed here. The University of Wisconsin and University of Minnesota extension services both have recent articles from climates similar to ours. Give them a look as you weigh your options.

Tillage might be necessary to fill in some ruts, and in cases of severe subsoil compaction the use of a subsoiler may be warranted. (Make sure to check the Guide to Successful Subsoiling before you start.)  But what if you’re tired of burning diesel with deep shanks, or if you’re on a path or committed to no-till or minimal tillage?

The key to addressing compaction (AFTER avoidance!) is to restore and maintain critical soil functions. Compaction costs us because it reduces aeration, infiltration rate, plant-available water, and root access to soil resources, to mention only the direct impacts on crop performance. What do these have in common? They are the results of macropores in the soil, which are the most reduced by compaction. Macropores are the large “drainage” pores in soil, but they are so much more. Many could actually be called “biopores”, since they are created by biology – roots and worms, mostly. This article will examine how we can address compaction in the subsoil using cover crops and crop rotation.

You might have guessed by now that the primary way various “pre-crops” can limit the effect of subsoil compaction on cash crops is by restoring macropores and the functions they provide. Generally, crops with deep, thick taproots are the most capable of penetrating dense soil, and they leave the biggest (>2mm) biopores behind. Most brassicas fit this description, including oilseed and forage radishes, as well as rapeseed – all common cover crops. For more strongly or more deeply compacted soils, however, it may take several years for a significant amount of root penetration to occur. Alfalfa is the best and most well-known crop for this, though some other tap-rooted forage species can also be used, such as sweet clover. Deep root penetration can also induce small cracks in the soil that function as macropores through their drying action. For root biopores and their benefits to persist longer than a few years, however, they must be stabilized by deep-burrowing earthworms, who will coat the walls with glues and organic matter1.

Macropores improve root growth and exploration, particularly in denser soil. Roots of corn, soybeans, and wheat have been shown to actively grow towards large pores formed by previous roots or worms, likely attracted by higher oxygen levels. One study on corn following alfalfa found 41% of corn roots growing in previous alfalfa root channels in a clay loam2, while another observed that over 90% of wheat roots below 40cm were growing in biopores or cracks in a dense clay soil3. Many other studies have found similar results, but one put it this way for soybeans: “if a taproot failed to encounter a burrow at [30-45cm], that root tip died”4. In soils where there is a dense subsoil layer over less-dense soil, there is evidence that roots will follow macropores through this layer and then re-enter the bulk subsoil to access resources5.

One of the most crucial resources to plant growth is water. Here, macropores serve multiple functions, increasing infiltration, drainage, and root access to moist subsoil. While macropores that are intact to the surface improve drainage, even those that are disturbed by tillage and only start in the subsoil can reduce ponding over the subsoil and increase drainage through compacted layers.

With respect to plant access to water, the taproots of forage radish and rapeseed increased the least limiting water range (LLWR) – a measure of plant-available water that incorporates the limitations of adequate aeration on the wet end, and penetration resistance on the dry end. Used as cover crops, these species increased the LLWR of compacted soils, and also increased the critical bulk density at which least LLWR reached zero. In an Australian study, wheat grown after alfalfa extracted more water from below 70cm than wheat after clover, and other studies have shown similar improvements in wheat water uptake with increasing numbers of biopores6. Having access to deep soil moisture can be critical in a dry growing season. One might assume that deep roots would contribute less to crop growth if most of the nutrients are in the topsoil, but research has shown that as long as part

of the root system receives water, other parts can continue to extend into dry soil7 (assuming non-limiting penetration resistance) and so could be ready to absorb those topsoil nutrients when better conditions return.

While it’s important to note that increases in crop performance due to biopores are variable – depending on soil type, climate, and the specific crops grown – their benefits often become apparent in difficult years like the one we’ve had in 2018. While two to three years of alfalfa is probably the best way to re-establish vertical porosity in soils, many growers don’t see forages making sense in their operations, or can’t find someone who can and is willing to temporarily swap fields. If that is your case, try to find someone near you who has had success with forage radish or similar cover crops, and make a plan to incorporate them in your rotation or cover crop mixes in the future. 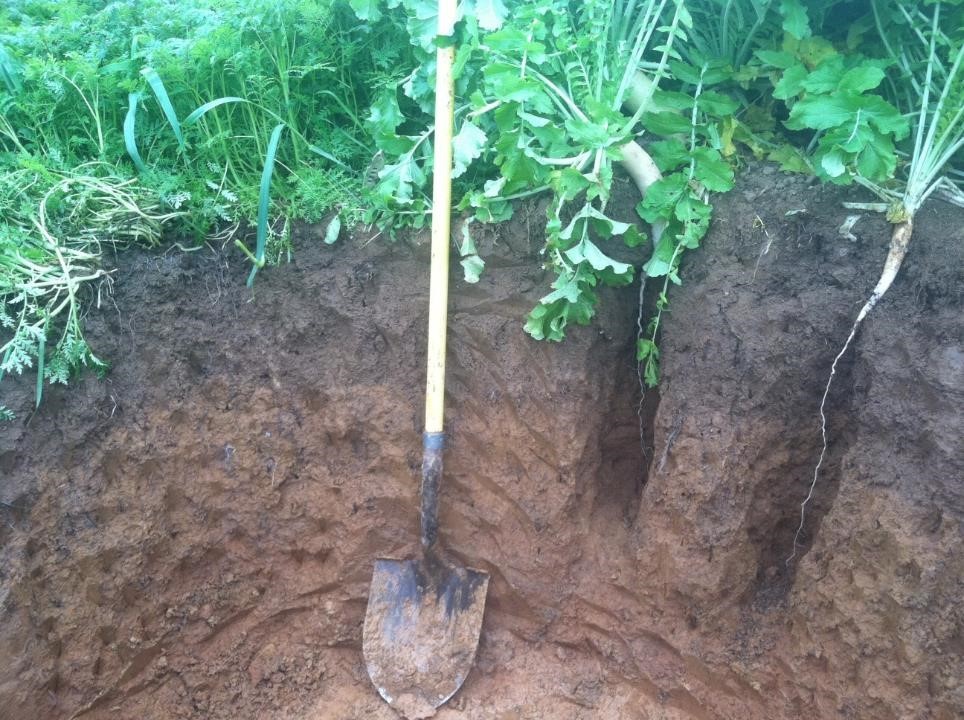