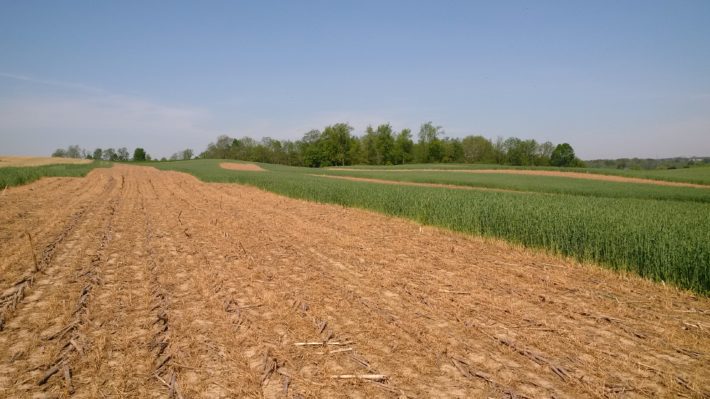 Go here for the updated version of this article.

Cereal rye has several strengths as a cover crop option. It’s relatively inexpensive and easy to kill. Rye improves soil structure, builds organic matter and helps protect against water and wind erosion. It also competes with weeds, as Mike Cowbrough has written here (see Figure 1). However, in most cases, rye doesn’t put on much growth until the month of May. Delaying termination up until soybean planting provides an opportunity to enhance rye’s benefits by giving it more time to grow in the spring. The question is, does planting soybeans “green” into rye negatively impact yield? This was the motivation for a series of on-farm trials with Brant County Soil and Crop Improvement Association, in which soybeans grown after early-terminated rye were compared to those “planted green” into rye.

Four on-farm trials were conducted in 2017 and 2018 (Table 1). Sites had between 2 to 4 field-length replicates of each treatment (early vs. late rye termination). One site outside the county, Lambton 2018, was added to the study.

Across 4 sites, rye biomass increased on average by 4.3-times when terminated at time of soybean planting compared to 2 weeks prior (Table 2).

Table 2. Rye biomass (dry) at early versus late termination timings across all sites.

At the site with the greatest amount of rye biomass, Brantford 2018 (Figure 2), allowing an extra two weeks of growth resulted in over 8 times more plant material. Extra biomass contributes to building soil organic matter faster and provides a long-lasting mulch. At this site, late termination also resulted in an extra 48 lbs/acre of nitrogen scavenged by the cover crop – from 12 to 60 lbs/acre. Nitrogen taken up by rye is released slowly over the season and is less likely to be lost to the environment. Since soybeans fix their own nitrogen, this uptake doesn’t negatively affect the crop. Delaying termination of rye does not come without some risk. Soybeans stands were reduced at some sites (Table 3).

It’s particularly important to plant into moisture and ensure that the seed trench is closed. Also, if conditions are very dry leading up to planting, terminate rye early to avoid planting into even drier conditions.

Soybeans in later-terminated rye also tended to have delayed development. Across all sites in 2018, plants were consistently one growth stage behind in the “plant green” plots (Figure 3). Soybeans are adaptable, to a point, to reduced stands and moderate delays in development. At the Brantford 2018 site, for example, despite delayed early season growth, soybeans planted green into rye had an equal or greater number of pods per plant and seeds per pod compared to those in the early-terminated rye. Figure 3a. Soybeans at the Brantford 2018 site. Soybeans planted green into rye were one growth stage behind and shorter than those planted into early terminated rye. June 26, 2018. Figure 3b. At the Lambton 2018 site on July 31, soybeans planted into early terminated rye (right-hand side of photo) were taller and one growth stage ahead.

Effects on weeds were not evaluated in depth. However, a greater density of Canada fleabane was observed in early-terminated strips at the Brantford 2018 site (Figure 4). At this site, the herbicide program did not include a product with good efficacy on glyphosate-resistant Canada fleabane.

Figure 4. Soybeans in early-terminated rye (left) had a much greater density of Canada fleabane than soybeans planted green into rye (right) at the Brantford 2018 site.

Soybean yield varied from a low of 50 to a high of 69.5 bushels/acre across all sites (Table 4). There was no statistically significant difference in yield between early and late termination at any site. There was, however, an overall trend of reduced yield with planting green into rye (average loss of 1.4 bushels/acre).

Table 4. Summarized yield results from all sites. Statistically significant differences in yield between early vs. late termination at each site are shown by different letters. Yield is based on 13% moisture.

*Farmer cooperator forgot to include a herbicide with good efficacy on glyphosate-resistant Canada fleabane in late termination strips, which resulted in greater weed pressure.

With a trend toward yield loss at 3 out of 4 sites, it’s clear that delaying termination of rye until soybean planting carries some risk. Overall, however, the loss was low. At the Lambton 2018 site, very dry conditions in June and July likely made matters worse following planting that was too shallow in the plant green strips. And at the Brantford 2018 site, a reduced plant stand was likely the reason for the slightly lower yield, since pod and seed number didn’t differ.

Based on these observations, the following lessons were learned:

There’s no doubt that allowing an extra couple weeks of growth maximizes the soil benefits of a rye cover crop: more biomass, more time with active roots and a lasting mulch. It’s a new practice, however, and still needs some fine-tuning.

If you’re new to rye as a cover crop, gain confidence by terminating it a couple of weeks before planting soybeans in the spring. If you’re more experienced, leave a couple strips to be sprayed after soybean planting this coming spring and see how it works on your farm. Have a goal in mind – is it weed management, building organic matter or overall soil health? And finally, be flexible and adapt your plans according to weather conditions.

Starting this fall, an OSCIA Tier Two project by Heartland and Eastern Valley regions will evaluate the effects of cover crop rye on weeds, crop yield and more. The two-season project will look deeper at the question of termination timing in the spring and evaluate the use of a roller crimper.

This project was conducted by Brant Soil and Crop Improvement Association with OSCIA Tier One funding. Thank you to the farmer cooperators who made it possible. 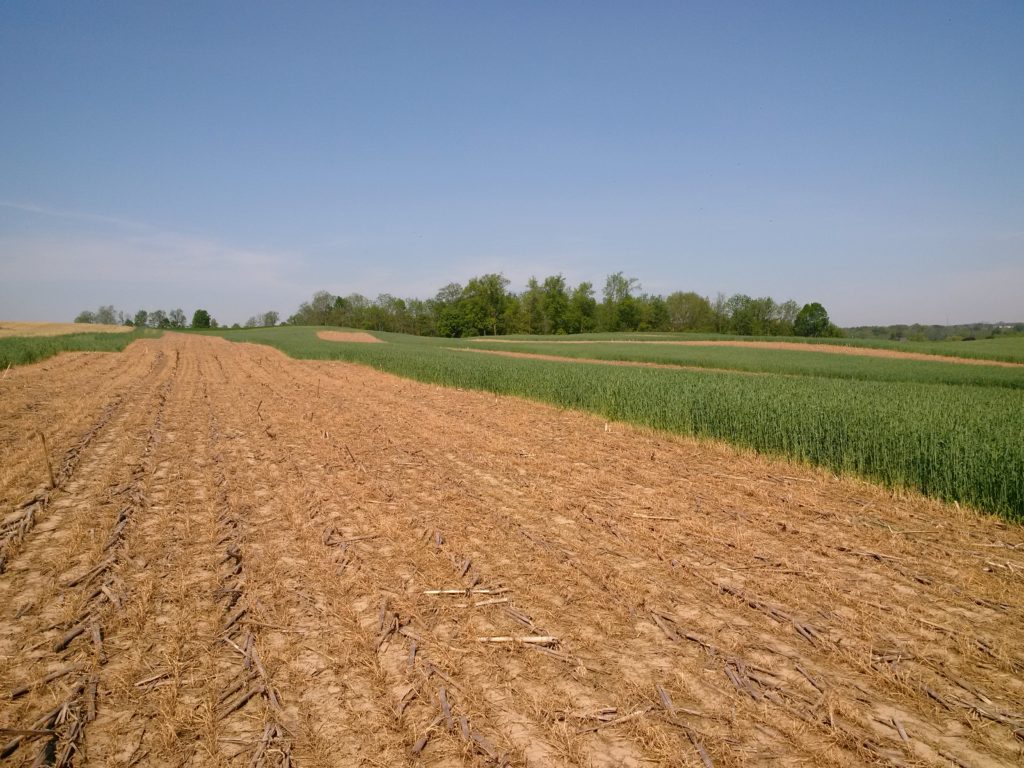