This article was written by Chris Gillard, University of Guelph- Ridgetown Campus.

Sulphur is an important nutrient in field crops. It is part of the chlorophyll in leaves, two essential amino acids, and rhizobia bacteria need it for nitrogen fixation. Sulphur is mostly stored in soil organic matter (OM), and it is mineralized each summer as OM breaks down. Sulphur will leach from the soil and volatilize into the air if crops don’t take it up, which makes soil testing difficult. Sulphur acts a lot like nitrate nitrogen, which has its own soil testing story! Our crops used to get a regular dose of sulphur from air pollution and acid rain, with manure being a good secondary source. Southern Ontario was always a hot spot for air pollution, but levels have dropped dramatically since 1990. This has reduced yearly sulphur deposition by 70% or more. At the same time our crop yields have increased, exporting additional S from the soil.

Crops differ in the amount of sulphur they remove, with alfalfa, canola and wheat removing the most; corn and soybeans removing the least. Recent Ontario studies agree, with a yield response to sulphur fertilizer in 50% of the alfalfa and canola trials and 33% of the winter wheat trials, but almost no response in corn and soybeans (J. Lauzon, Univ. of Guelph). A poor response in soybeans isn’t that surprising. There are large regions in North America that have been deficient in sulphur for decades. In those regions, soybeans typically have the lowest response.

In 2018, we tested dry bean response to three sulphur fertilizers at the Huron Research station. Potassium sulphate and ammonium sulphate were compared to ammonium thiosulphate, at a rate of 25 kg S ha-1. Ammonium thiosulphate is unique in that it is a liquid fertilizer, but it is less available to the crop. Some fertilizers contained nitrogen, so each treatment was balanced to include 50 kg N ha-1, which is a nitrogen rate that most commercial dry bean growers use. Cultivars from black (cv. Zorro) and navy (cv. Mist) market classes were tested. The soil was a clay loam with 35% sand, 39% silt, 26% clay  a pH = 7.8 and OM = 3.8%.  Sulphur content was measured in the whole plant at V5 and in the top leaves at the R2 stage of growth.

The leaf sulphur content was < 0.25% (the minimum critical level for alfalfa) at the R2 stage. However the sulphur fertilizers did not affect plant sulphur content at either growth stage. The sulphur fertilizers did not affect plant growth (height or dry weight), plant development stage or canopy ground cover (Greenseeker score) at the V5 growth stage.  Yield (kg ha-1) and seed weight for each fertilizer treatment was similar to the untreated control, which received nitrogen fertilizer only. Zorro and Mist had different seed weight and yield, but these cultivar differences were expected.

Research across North America found a response is more likely in fine sandy soils with low (<2%) OM, under cool dry conditions and minimum tillage, which reduces the mineralization of OM. This study doesn’t fit that model well as the soil was a clay loam with relatively high OM content, a conventional (moldboard plow + 2 passes cultivation) tillage system was used, and temperatures were above average in 2018. April was very cold but a very warm May should have started the soil OM mineralization before the study was planted on June 6.  There were dry periods in June and July, but overall the moisture was average through the growing season. It is interesting that a number of Ontario alfalfa and canola studies that measured a sulphur response, were NOT grown on sandy, low OM soils. We will continue this work for the next two years, to test these findings. 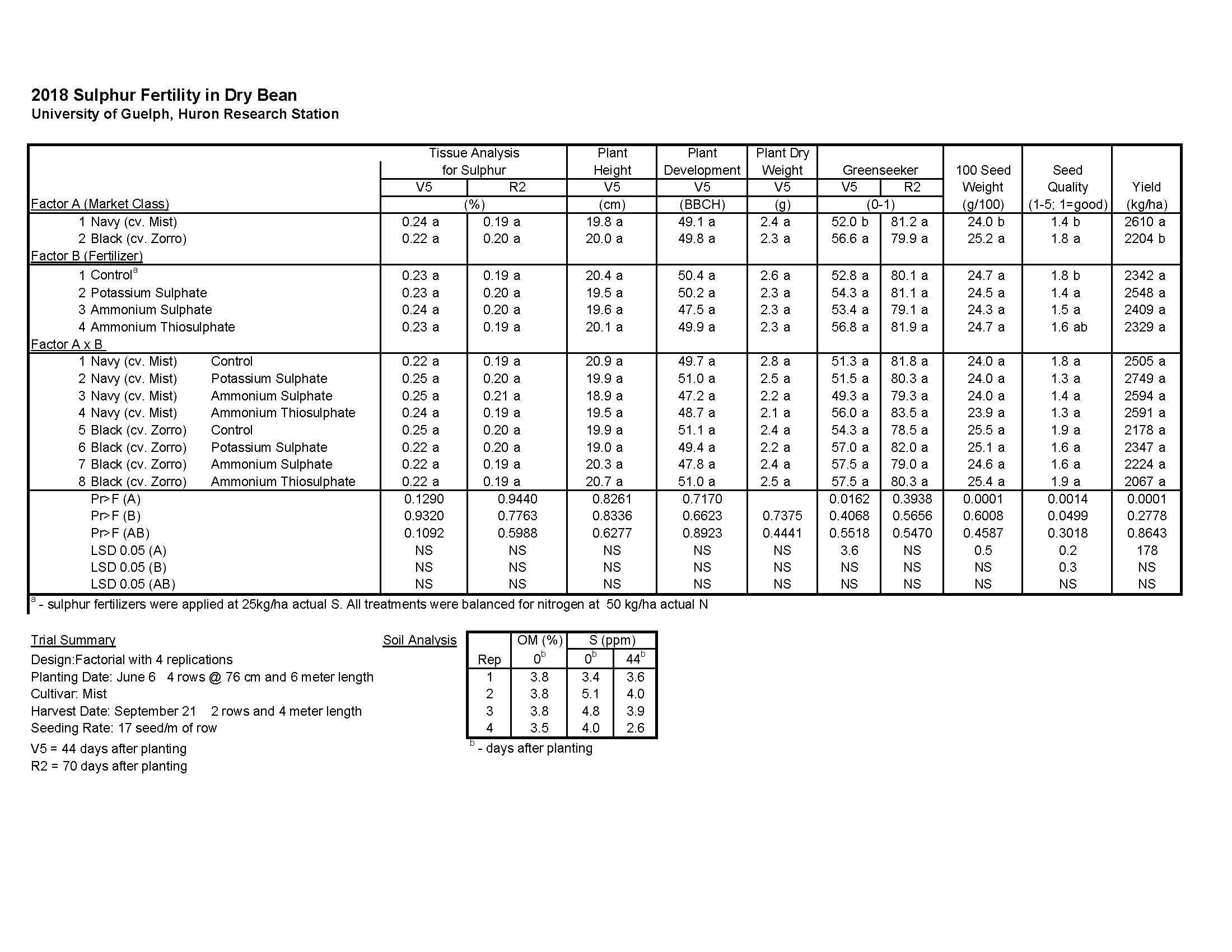