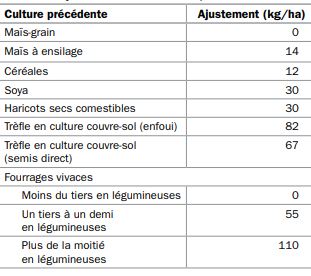 The nitrogen (N) fertility algorithm proposed at the recent Eastern Ontario Crop Conference by Dr. Dave Hooker, University of Guelph- Ridgetown Campus, was “80% of the recommended N applied pre-plant, then 1 lb/ac of additional N for each millimetre (mm) of rain from the V7 to VT corn growth stage.”

Drs. B. Deen, D. Hooker and J. Nasielski of the University of Guelph reviewed several of the long-term nitrogen corn trials from the Elora and Ridgetown Research Stations to look at what factors most influenced the most economical rate of nitrogen (MERN) in Ontario grain corn. Rainfall between V7 – VT corn stages (see Table 1), had the greatest correlation to the actual MERN each year. This timing is usually between mid-June and mid-July.

With the availability of high clearance fertilizer applicators (Figure 1), growers can apply nitrogen later in season than the traditional sidedress N timing in early to mid-June. The ability to apply N later allows growers to manage the timing and rates of nitrogen applied each year. By applying most of the corn crop nitrogen needs earlier and using the algorithm, growers can fine-tune the balance of the N based on the rainfall mid-June to mid-July to optimize the grain yield in a given year.

In Figure 2, the MERN is starred on each year’s yield curve. This shows that in continuous corn, the MERN ranged from 140 to 260 kg/ha depending on the year (same soil, same management, and same hybrid). Further analysis of the data showed that in most years applying up to 30 kg/ha more than the MERN or 30 kg N/ha less than the MERN is within about $10.00 of the maximum net returns per acre from nitrogen. Figure 3 shows the relative net returns per acre in green on the corn grain yield curve for each year.

So what is the recommended pre-plant rate of nitrogen? Total pre-plant N recommended rates can be based on the Ontario Corn N Calculator, “normal practice”, or field MERN from previous experience. From several trials in Eastern Ontario, the average MERN in a corn-soybean rotation for most fields is about 130 lbs/ac of N but has varied +/- 30 lbs/ac in a given year. This was demonstrated in 2017 when there was above normal rainfall in June and July, and the MERN was about 160 lbs/ac. In determining the pre-plant N rate, other factors such as crop rotation, organic matter, applied manure, soil type, price ratio of corn grain price to N and of course, rainfall, need to be incorporated. For example, Table 2 shows the amount of N reduction based on the previous crop as compared to continuous corn. 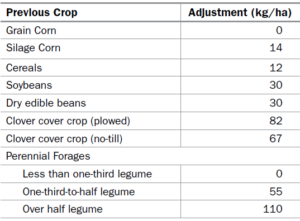 The MERN or most economical N rate is highly variable from year to year. There are several factors such as crop rotation, organic matter, manure and soil type, but most importantly is rainfall, particularly between mid-June and mid-July. With the use of high clearance fertilizer applicators, growers can split apply N in season up to the V13 corn growth stage (usually mid-July). The split application gives growers the opportunity to optimize N use and maximize net returns.