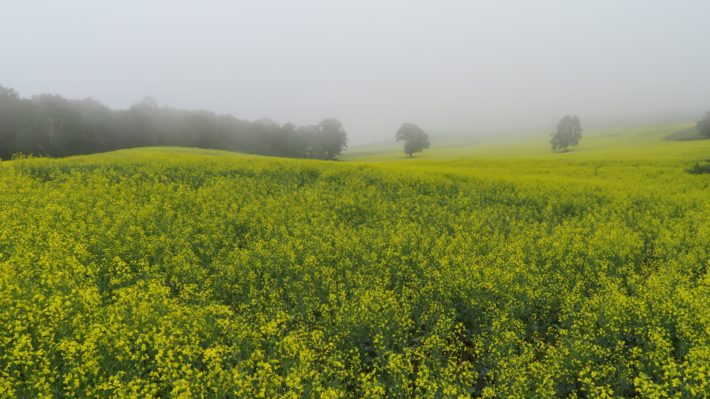 Meghan Moran April 20, 2019 3228 Comments Off on Should I Always Apply Boron to Canola during Early Flower Stages?
Canola

Boron application at flowering is a common practice for Ontario canola growers. Canola has a higher requirement for boron than crops like wheat and barley, so it make sense to give canola a shot of this micro nutrient. Timing the application during reproductive stages makes sense too, because boron deficient plants have been shown to express slow growth of pollen tubes, to have fewer pollen tubes, and to have reduced rates of pollen germination.

It is also common to have dry conditions during flowering in June and July, which will reduce boron availability. Boron is highly mobile in soil, and concentrations fluctuate with leaching and mineralization.  It is primarily taken up by roots through mass flow, so there will be less plant uptake of boron when soils are dry. Mineralization of boron from soil organic matter is also reduced when conditions are dry. Soils with low levels of organic matter, or those with very high pH (>8.0) may also have reduced boron availability.

Levels of boron in soil are often less than 1 ppm so it is difficult to measure accurately. In fact, there is no accredited soil test for boron, although tissue testing can be used to identify deficiencies. Canola will utilize approximately 0.35 kg B/ha during the season, but removal rates are only about 0.10 kg/ha. Flowers are sensitive to many stresses, and it is frequently stated that boron can reduce the impact of heat stress on yield. Temperatures above 28°C can cause flower and pod abortion and significantly reduce the number of pods a plant produces. However, research conducted in Ontario over the last decade has shown that boron is inconsistent in alleviating heat stress. The University of Guelph has reported that heat stress causes greater yield loss when it occurs at 3 days after first flower compared to 14 days after, although both can reduce yield. In their trials, foliar boron had no impact on yield when there was no heat stress present. When yields were negatively impacted by high temperatures, boron treatments were only beneficial in some cases.

Thirty-three boron strip trials were conducted by OMAFRA and numerous Ontario farmer cooperators from 2008 to 2011.  Foliar boron applied at 0.3-0.5 lb/ac during early flowering stages resulted in yield increases 24 times out of 33 (73%), but there were also yield losses 21% of the time. Overall, there were only economic advantages to applying boron 36% of the time. A similar small plot trial conducted across eastern Canada by Dr. Bao-Luo Ma (AAFC Ottawa Research and Development Center) and collaborators resulted in yield increases 4 out of 10 times where boron was applied at flowering.

There is a fine line between deficient and toxic levels of boron. Canola Council of Canada recommend foliar applications of boron at rates of 0.3-0.5 lb/ac. They indicate the lower rate may be safest, and care should be taken to prevent overlaps to avoid issues with toxicity.

While visible symptoms of boron deficiencies are rare, transient deficiencies may occur under dry conditions. If conditions are dry during flowering, the plant may not be taking up enough boron and there may be advantages to applying boron in the early flowering stages. If heat and moisture are non-issues in a given season and your soils are not prone to boron deficiencies, it may be best to save your money and skip the foliar boron application.