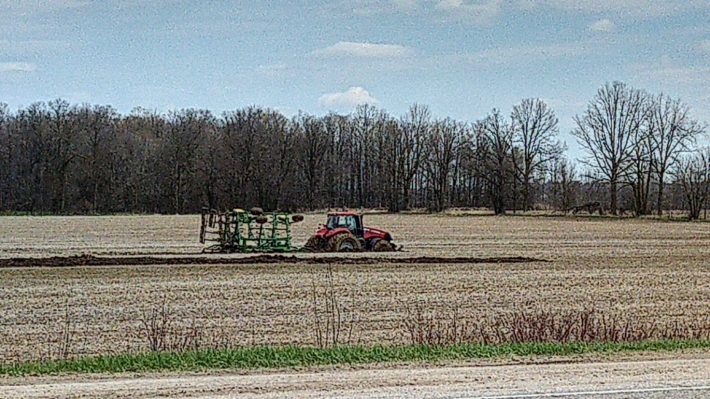 Thanks to Troy Hamilton and Pioneer for sponsoring breakfast.

Not much has happened in the fields since we met two weeks ago. Continued wet conditions, mostly from small rain events and low heat and little sunshine preventing drying, has hampered planting and other spring field activities so far. But the turn around starts now!

CHU accumulated the first week of May at Mt. Forest is 46, and over April 15-31 was 56 although this number is high considering the number of frost days. Therefore, the late planting start has not resulted in a lot of missed heat to date.

Some ground with lighter soils has been worked, i.e. Alliston potato land. Manure is starting to go out but the field conditions are for the most part NOT fit! However, a poor fall and late spring have left some people with tough choices as storages are full.

Farmers are feeling it! So is most of the supply chain. This is mental health week. If you come upon clients who you are concerned about, seek help. Resources, including an online chat option, are available (http://www.omafra.gov.on.ca/english/about/mental-health.htm , https://gfo.ca/farmerhealth/ ). The Ontario Mental Health Help Line is 1-866-531-2600, or you can dial 211 to be connected to mental health support in your community. We need people looking out for each other. It’s difficult and uncomfortable but we are in this together. Watch out for yourselves and those you connect with.

Everyone is itching to go and feeling caught by the season delay. This will push people into fields earlier than they should be there. You end up living with compaction for a long time. Options are patience, lower tire pressure, use the biggest volume tires you can, don’t fully load manure and fertilizer spreaders etc.

Observations Tuesday saw fields being worked that were obviously too wet. This will impact seed emergence uniformity and the crops ability to access nutrients and water as the season progresses. From the minute the seed goes in the ground, the various stresses are working against that yield potential. Our objectives are to minimize these stresses to give the crops their best chance to deliver on their potential.

Winter Wheat – Continues to be high on the discussion list. Up until this weekend, very little has changed in two weeks. With some warm sunny weather between Saturday and Monday, more acres got a shot of much needed nitrogen and whether fertilized or not, fields started to green up. The good fields (early planted, well drained soils) are taking off. The poor fields have not improved. Those questionable fields continue to be a decision problem. They have greened up but with the bare spots and uneven population in the other parts of the field, the decisions continue to be difficult. This is proving to be particularly challenging for those who need the straw or have a grain contract requiring delivery. Poor wheat in many fields is a function of planting date, shallow seeding depth, tougher soils that contributed to ponding over winter and continued wet feet through April and into May. I

With so many acres being without any nitrogen yet, many are moving to a single shot of nitrogen rather than a split application. Sulphur is almost standard in the nitrogen treatment these days.

There have been over 3,000 calls to Agricorp. Some adjusters are commenting it is the worst they have ever seen; however, it is area specific.   Areas in the south west on heavier soils are the poorest, with estimates of more than 50% of the crop coming out. Moving north and east things improve beyond Middlesex and Perth. Huron county is better than Bruce, Wellington and Dufferin counties. Further east into York things look quite good through to the other side of Bellville. Eastern Ontario is also dealing with tough winter wheat stands.

As people continue to wrestle with the decision, the start of corn planting might make that decision for them since there will be no time to worry about the wheat. Lots of discussion around getting corn and maybe even beans in before turning attention back to wheat. This will likely designate those wheat acres to corn or soybeans.

Discussion continued on what to do with bare patches in wheat fields that are kept. Its important to keep the weeds down so something should be growing there if the spots are of substantial size. If you are going to plant spring wheat into bare spots in your winter wheat stand, it is important to keep the spring wheat and winter wheat separate at harvest. If you are going to feed it to your livestock, mixing the grains at harvest is an option.  Contamination of the winter wheat harvest with spring wheat is a serious problem for the value chain.   Some other options for seeding bare spots include red clover (single cut), winter wheat, oats or barley. Further information on options for filling in bare spots is available HERE.

With poor stands and short wheat, weeds are germinating and will need attention shortly. Priority should be placed on nitrogen applications shortly followed by herbicide applications. More information on this topic is available HERE. The wheat stands that are behind are going to require a full management approach to achieve the yield potential they have. Unfortunately, an average/poor crop usually costs as much if not more than a great crop to produce.

There was discussion about maturity and how far the late planted crop is behind the good wheat. Consensus is that wheat tends to catch up, so likely no more than two weeks, but in season weather is always the deciding factor.

Marketing Wheat – with soft red wheat being the bulk of the acres (85+%), many are rolling contracts forward to 2020. It appears this flexibility is not as easily available on hard red wheat contracts (7% of acreage) which is a function of specific local markets and the need for that wheat. Growers are being told to purchase it and deliver on their contracts.

Spring Wheat – planting intentions are high with seed supplies now low as people look to spring cereals for straw and grains to replace lost wheat acres. Still hampered by weather delays so very little has been planted. Deadlines of crop insurance are as follows or direct from Agricorp HERE:

There are continuing reports of alfalfa winter kill. The group thinks there still is a lack of scouting of hay fields, and more problems should be being reported. It is important for people to get out and check those fields. The window for putting new seedings in to compensate for winter losses is closing and needs to be addressed first. Alternatives to alfalfa will be spring cereal silage/balage but finding seed may be tough. More corn silage is also an option as will be annual cover crops after cereal harvest although those acres available will be lower because of the loss of wheat fields. Where fields are lost, some will be taking a cut of grass hay and then going into silage corn.

Producers who plan to use a fungicide in alfalfa should be thinking now about the number of days to first cut. Despite the weather and delays much dairy hay will still be cut in that June 1st window so fungicide treatments with 21 day pre-harvest interval would need be applied shortly.

On the insurance side, only first year fields are covered with the reseeding benefit. Many of these fields are ones that have had better survival. Older stands may be suffering due to stress of intensive harvest schedules.

Don’t forget forage rainfall insurance. For those who have faithfully taken it, they have benefited.

Very little discussion. Next to none has been planted. Some ground is fit, but it tends to be the knolls and the ground to cross to reach it is not fit. There has been some talk of hybrid switching but again this is way too early. Some farmers go with a 20-60-20 strategy of long-normal-short maturity hybrids across their acres, so may consider a change of plans on the long day 20% if they can’t get it in the next week.

There are some acres planted but they are very limited, only where intended corn ground was not ready but the soybean land was. Burn downs are critical. Fleabane is there or will be there so don’t ignore it. It is important to have residual herbicides for effective control of this problem weed even with post options through dicamba and 2,4D.

If a field received nitrogen fertilizer for winter wheat or even corn this spring but is then switched to soybeans does the nitrogen cause problems for the soybean crop?  Generally, there are no issues that arise from fertilizing soybean with nitrogen unless levels are well over 100 lb/ac of N.  The soybean crop will simply use the fertilizer N before it fixes nitrogen from the atmosphere.  In extreme cases where there is excess nitrogen the beans may get lush and be more susceptible to white mould or lodging but they still pod up normally.  Fertilizer N will delay nodulation if amounts exceed 50 lbs/ac.  It is theoretically possible for nodulation to be so delayed that yields suffer from insufficient nitrogen in late summer, however, field experience has shown this rarely happens in Ontario.

The late fall of 2018 meant a good number of red clover fields were not terminated last fall. Additionally, it has been difficult to get to those acres this spring and the red clover is growing. The result is big crowns which are going to need higher rates and the right mixes for success. Dicamba while effective has to be used carefully. It should not be worked into the soil. Row cleaners and other discs on corn planters can provide significant tillage which can work dicamba into the seed placement zone, which can increase the risk of crop injury. If wanting to use dicamba, the best option may be to plant first and then immediately spray after planting.

There are control measures to deal with red clover post emergence but the yield impact of not controlling the stand prior to planting is very significant. The following articles summarize sensitivity of red clover to herbicide applications in the fall and in the spring.

While its too early to really be worrying about it, keep in mind that the USAB (unseeded acreage benefit) had to be applied for prior to May 1st and must be reported by June 15th. While it is not automatic coverage, over 92% of clients have it.

The Risk Management Program is being reworked with 95% coverage option. Details are still being worked out so continue to check the website (http://www.agricorp.com/en-ca/Programs/RMP/Pages/Overview.aspx ). 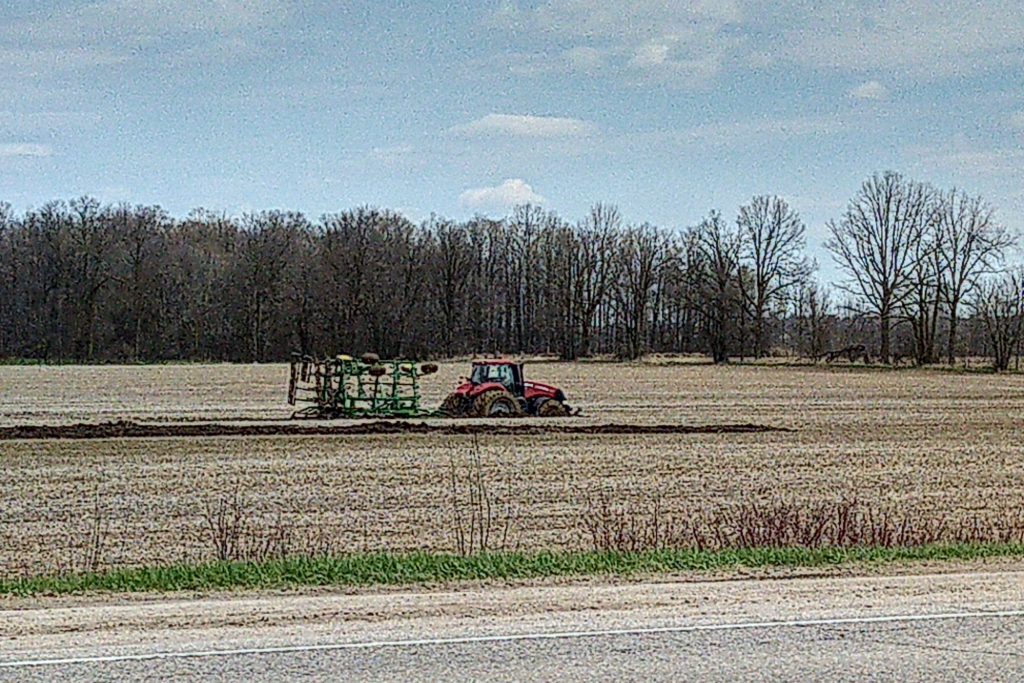