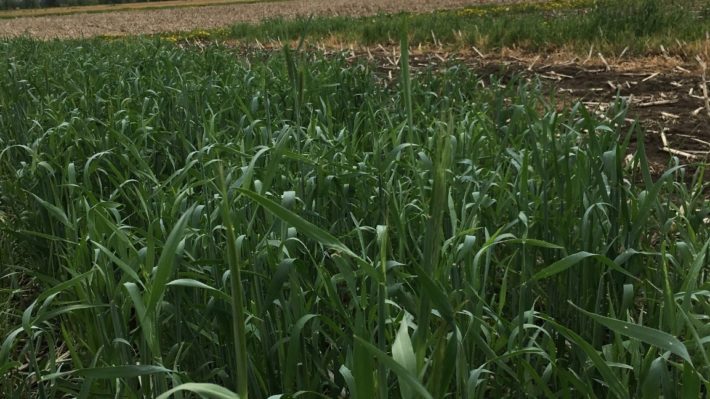 Agricorp has received more damage report calls; about 55% of new 2018 forage seeding have been written off. Growers only have until the first time they cut or May 31st, whichever comes first to make damage reports to Agricorp. Still some new forage seedings are just being planted now. Generally forage seed supply is good.

Alfalfa is about 2 weeks behind normal. June grass is in head and the orchard grass is close to heading. Cereal rye is just beginning to head out and some growers have begun cutting. Forage quality of cereal rye drops quickly as it matures past the boot stage.

Forage yields are expected to be about 2/3 of normal. Alfalfa stands are thin; less than 50 stems per square foot on many stands. More growers are putting in soybeans intended for emergency forages. It was commented that forage soybeans stored in an ag bag need to be harvested early to avoid the stems from becoming too ‘woody’ and poking holes in the bag. It was suggest harvesting earlier around August 20th, or at the R4-R5. It was noted that forage soybeans can get a lot of ash in the feed from the soil as they need to be cut and laid flat to let them dry-down to harvest. Also the forage soybeans can be tough on equipment. Forage soybeans will need to be sprayed for white mould (earlier rather than later). Other emergency forages being planted are cereal pea mixes. An alternative to late-planted corn silage is sorghum-sudan grass.  Sorghum-sudan grass is a warm season grass which can be planted in late May and into the summer months. A first cut can be harvested approximately 60 days after planting and a 2nd cut and potentially a 3rd cut, approximately 30 days after each cutting. Sorghum-sudan grass is good for heifer/dry cow feed and can help save high quality corn silage for high producing cattle.

The feeling of the group is that forage stands need more management attention species/variety selection(s), establishment and overall fertility. There is a lack of information and that there are many different forage mixes that are being marketed, some resulting in poor winter survival causing farmers a lot of money and stress. With the current moisture, new seeding have been slow to emergence, but are expected to come along well. Agricorp reported that there has been greater interest from farmers growing forage to increase coverage.

Agricorp reported that several farmers have had no choice but to keep fields as they need straw and for the rotation. Many that are keeping their stands have no-tilled into what was partially green (80-90% killed) fields. This went in well allowing these farmers to reseed (another cereal) pretty fast.

Most of the winter wheat is in the stem elongation stage between the 1st  and 2nd node. Wheat seeded earlier in the fall into canola stubble is now at the early flag-leaf just emerged stage. Some are applying a fungicide with herbicide. This should be appied up to the stage of the flag leaf out but is not falling over yet.

Up to 30% more spring wheat was seeded then intended in some areas. Other farms had the seed but didn’t get it all in. Several farmers are planting spring wheat into the winter wheat for straw and for the sake of rotation as well. Insurance Cut-offs Oats and barley Area B is May 15th and May 20th in Renfrew. For spring wheat in May 31st is the cut off for Renfrew. For more information on How Production Insurance responds when planting is delayed. Emergence is generally good with most at the earlier plant spring cereals at the 2 to 3 leaf stage.

60 to 85% of the corn is planted across the area. Early planted corn has some population loss but nothing close to consider replanting (around 10% loss). Switching corn hybrids is reoccurring. Hybrid to plant now should be about 200 less crop heat units (CHU). Good hybrids are sold out. Set realistic expectations for planting in the last week of May. Crop Insurance planting deadlines, on How Production Insurance responds when planting is delayed,

Need about 5-7 good days to plant soybeans. Discussion on switching varieties (relative to what they are starting with). Realistically there shouldn’t be any change in variety until the 15th of June. If you plant on June 15th the relative maturity matters very little (e.g. as you delay planting for 2 different maturities, the longer season one is not much different in maturity when fall approaches). 4 weeks of later planting only equals 8-10 days later harvesting. Crop Insurance planting deadline is June 30th here, June 20th in Renfrew.

Tillage has been difficult. Challenging to plant through corn stalks.  Fields that have had vertical till units has not worked very well, still pretty wet and with heavy soil it is better to plant right into it. Try to work as shallow as possible, just need to crack the top and not any deeper then 1 ½ inch.  It is better to be too shallow than too deep. Given the moisture that we have – it looks like the soybeans will come through.

Seeing a lots of Canadian fleabane in the fields, also some Philadelphia fleabane.

Farmers are feeling financially stressed. Let customers know that there are Risk Management and AgriStability programs. Farmers can still sign up for this program if they have crop insurance. Need to encourage farmer to use these tools that are available to them.

Thanks to Brevant Seeds’ Marc Maisonneuve for sponsoring today’s meeting! 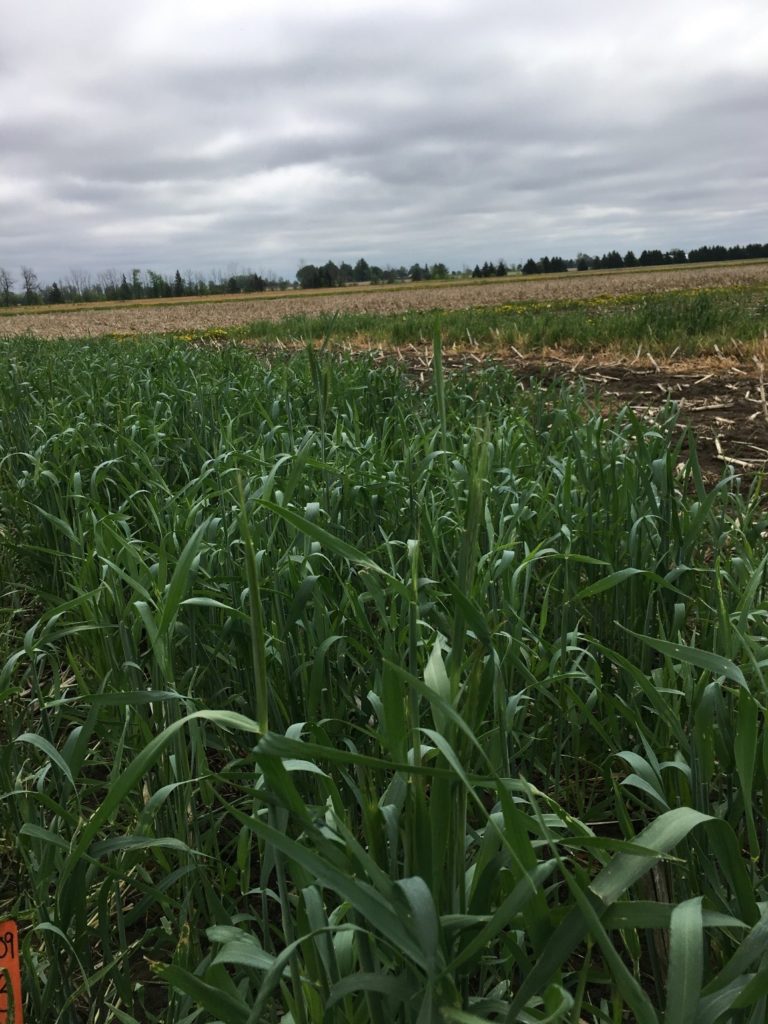